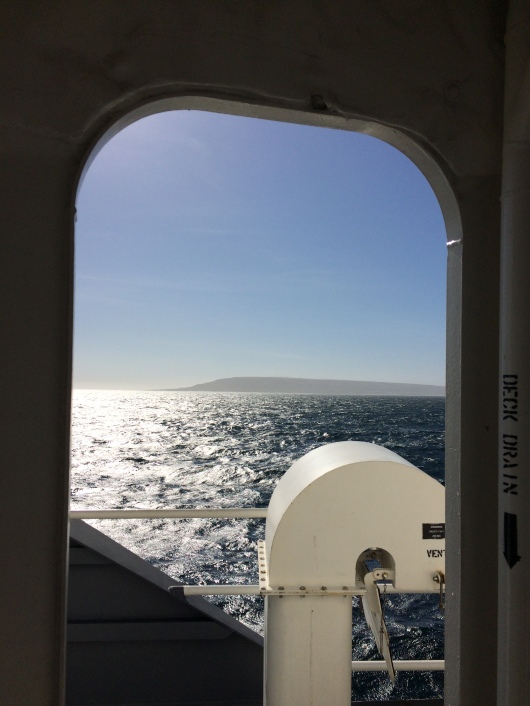 There is a lot of advanced equipment that is used to do a survey of fish that spans the coast of California. The Reuben Lasker has been fitted with state of the art echo-sounders (Figure 1), which send out pulses of sound that bounce off objects and return to the ship in the form of backscatter.  Looking at the backscatter data you can create a profile of the water column and see a variety of organisms swimming beneath the ship.  The target species for the research is the Northern anchovy (Engraulis mordax) and Pacific sardine (Sardinops sagax).  The schools of fish are detected using a range of frequencies.  Looking at graphical representations of these data, or echograms, you can see the bottom as an area with strong echoes and, at times, you can see an area of high-intensity back scatter higher in the water column such as a school of fish or an aggregation of krill or plankton (figure 2).  This would be a school of fish, krill or other organisms.  The geographic location of the school is marked for a return by the ship at night for collection using a trawl.  To conduct a thorough survey, the ship travels back and forth between the coast and a predetermined distance out to sea across the predicted habitat of the target species (Figure 3.)  Scientists referred to this as “mowing the lawn.”

Figure 2: An example echogram, showing the seabed and various sound scatterers in the water column. 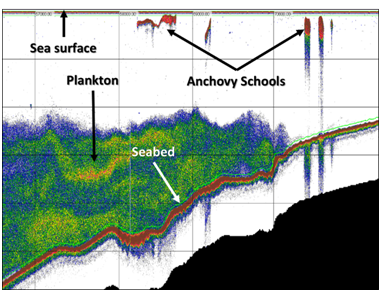 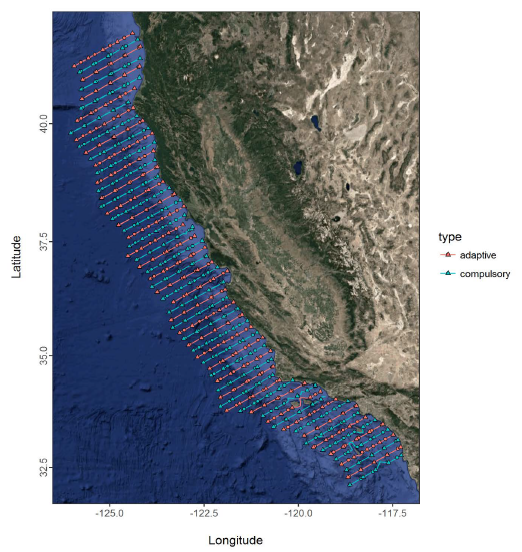 The Cruise Leader, Kevin Stierhoff, is a fisheries scientist who works for the Advanced Survey Technologies group at NOAA Southwest Fisheries Science Center (SWFSC) in San Diego, CA.  Not only has he been effectively managing this complex science expedition, he has gone out of his way to make me feel welcome and a part of this scientific endeavor.

How did you become a NOAA scientist?

I earned a B.S. in Biology, a Ph.D. in Marine Studies, and completed several postdoctoral research appointments prior to getting hired by NOAA. The work that my colleagues and I do at the SWFSC is very interdisciplinary, and the variety of educational and research experiences that I’ve had prepared me become a researcher at NOAA.

I consider myself lucky to have a job with a variety of duties. Not only do I spend time in the office analyzing data, but I also get to spend time at sea conducting survey and collecting data. When I’m not using acoustics to study pelagic fishes that migrate between Canada and Mexico, I use remotely operated vehicles (ROVs, or undersea robots) to survey endangered abalone that live on rocky reefs in the deep sea. When I’m not at sea, I’m analyzing the data that we collected at sea to communicate the results of our work.

What advice would you give to a student who would like to follow a similar career path?

Increasingly, a research career in marine biology requires a graduate degree to allow for maximal career advancement. If possible, take some time after undergrad to work in a job related to your career goals. This will allow you to focus your interests before choosing a graduate program, or perhaps discover that you don’t actually like that career path (better to find out sooner than later!) or that you don’t require a graduate degree to do the job that really interests you (which will save you lots of time and money). Most importantly, choose a job that you look forward to going to every day.

It is dark out, but as I look down from high atop the ship through an open window from the bridge, the lights of Long Beach reflect on the placid expanse of ocean and I come to a great moment of reflection.  One of the busiest ports in the world is just off in the distance and I am looking for marine mammals in this suburban wilderness.  Beside the glow of humanity, nature continues on. 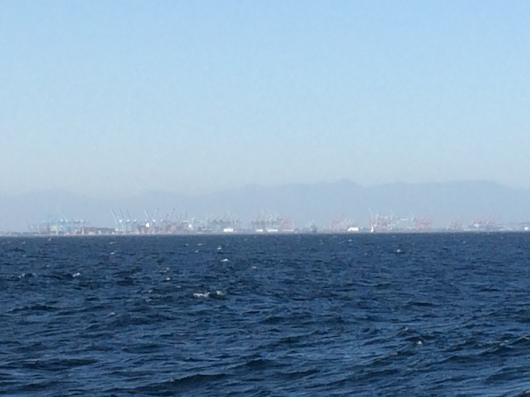 I have been mostly helping with analyzing organisms that came up in the trawl at night, so my work schedule has moved to a 6 pm to 6 am.  I am struck by how hardworking, dedicated, and driven all members of this expedition are.  The crew, scientists, and NOAA Corps collaborate to continuously run surveys 24 hours a day, 7 days a week.  I am enjoying working at night now even though it took me a few days to get use to all of the adjustments in my schedule.  I particularly enjoy doing the marine mammal watch from the bridge.  It gives you this aerial point of view of all the action the NOAA Corps expertly navigating the ship and coordinating operations, the deck crew masterfully deploying nets and equipment, and the scientists excitedly exploring the organisms we collect.

Catch of the Day!

Haliphron atlanticus – This strange creature is a gelatinous octopus, whose body resembles a jellyfish, but when you look close, you see eyes looking at you! 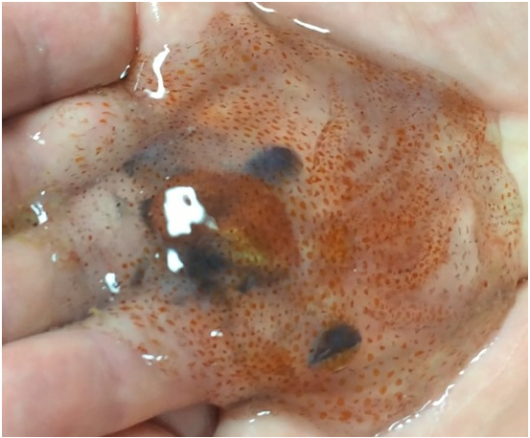 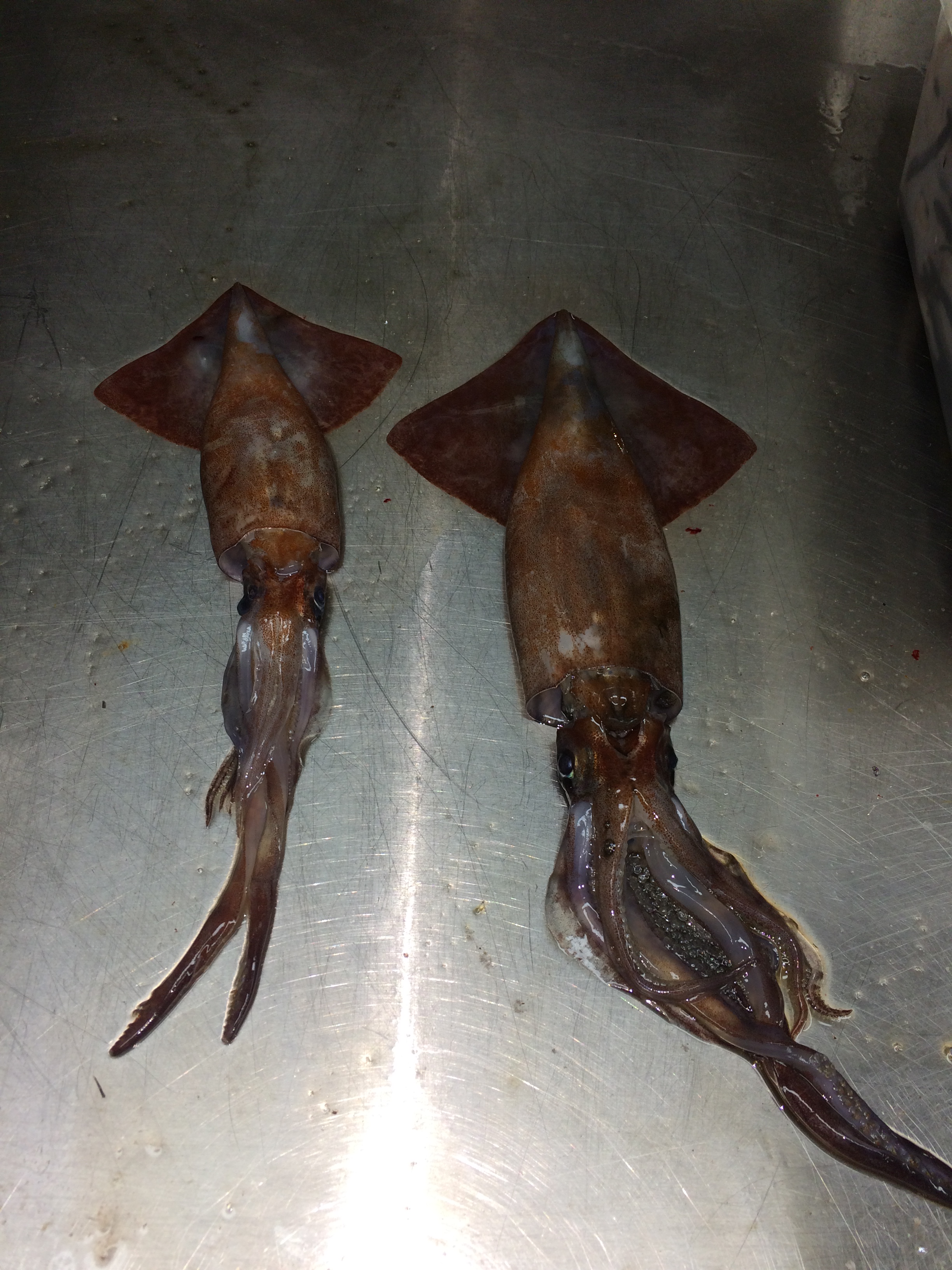 Ocean Sunfish (Mola mola) is the strangest fish I have ever seen! It is one of the heaviest bony fish, surprisingly from a diet high in jellyfish and salps. We caught a small and large sunfish. 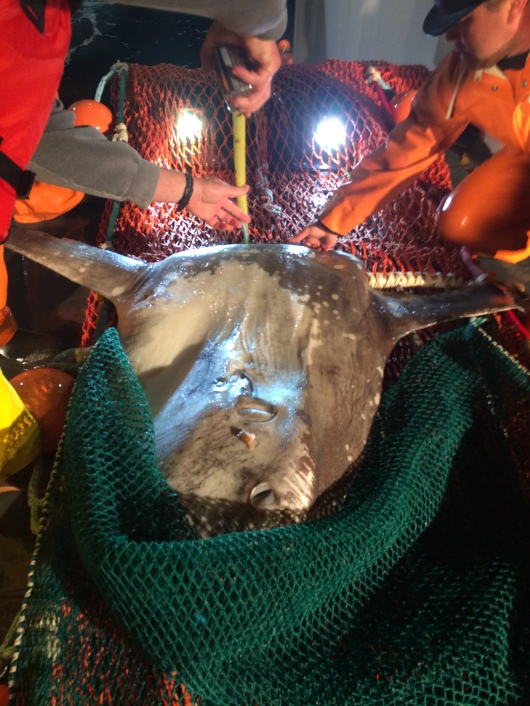 Curlfin Turbot (Pleuronichthys decurrens): This juvenile flatfish rises to the water surface at night to hunt zooplankton.  Flatfish have an eye that migrates from one side of their body to the other as they develop.