Mission: Ecosystem Monitoring Survey
Date: 6/5/2013
Geographical area of cruise:  The continental shelf from north of Cape Hatteras, NC, including Georges Bank and the Gulf of Maine, to the Nova Scotia Shelf

Walkway to the Gordon Gunter. Photo by Kevin Ryan.

Map of our Ecosystem Monitoring Survey.

I am currently onboard the Gordon Gunter, however we have been delayed a day due to an issue with the Automatic Steering Gear.  A part was to come in today, but the wrong part was shipped (twice) so we have to remain in port for another day.  We are currently at the Naval Station in Newport, Rhode Island and as soon as the part arrives, we will head up to the Gulf of Maine to start our Ecosystem Monitoring Survey. During the survey we will deploy our equipment and gather data at about 120 fixed stations and 25 random ones from the Gulf of Maine down to Norfolk, Virginia. At each station a Bongo Net (phytoplankton)  and/or CTD Rosette  (salinity, temperature, and density) equipment will be deployed which I will discuss in my upcoming blogs.

The de-commisioned Aircraft Carrier, Saratoga, at the Newport Naval Base. You can see the Gordon Gunter on the far right. 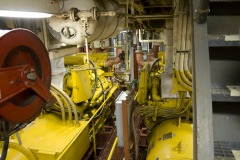 The diesel engines on the Gordon Gunter.

The Gordon Gunter: The NOAA ship Gordon Gunter was originally built in 1989 as the U.S. Naval Ship Relentless.  When first built it was designed to be used for ocean surveillance mainly hunting submarines. In 1993 it was transferred to NOAA and became the NOAA ship Gordon Gunter in 1998.  Because it was built for hunting submarines, it is a very quiet ship.  It runs off of four diesel generators that  power all the ship’s systems, which includes the ship’s two electrical propulsion motors and bow thruster.

The Gordon Gunter is 224 feet long with five levels above the water line. It can go at a top speed of 10 knots (about 11.5 miles per hour).  This does not sound very fast, but it is a good speed for completing scientific surveys (and hopefully avoiding getting seasick). Actually most of the trawling nets (like for phytoplankton) are dispatched at 3 knots (about 3.45 miles per hour).  The ship also has V-Sat (very small aperture transmission) satellite to provide connection to the internet and phone communications. 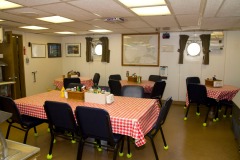 The ship seems to have all the comforts of home!  There is the bridge (ship navigation), observation deck, state rooms (sleeping quarters – with a total of 35 bunks), a gym, movie room, TV room, mess hall, store, laundry area, dry lab,and wet lab.  The “dry lab” is essentially the computer lab and this is where data from the survey will be entered into the computer. The “wet lab” is the location of where the ocean samples will be processed. 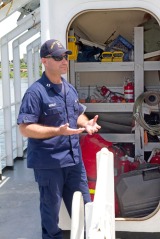 Today we took a tour of the ship and learned about some of the important safety drills that are required onboard. The three main drills are: Fire and Collision, Man Overboard and Abandon Ship.  Each one has it’s own set of alarms that we need to be aware of.  The day we depart (hopefully tomorrow) we will be doing one or more of these drills to make sure we are ready!

Besides the scientists onboard, there is a NOAA crew that pilots and runs the ship. The Gordon Gunter is involved in many scientific voyages along the Atlantic Coast from as far north as Nova Scotia to down south along the Gulf of Mexico and the Caribbean.  It’s home port is the Pascagoula Laboratory in Pascagoula, Mississippi.  Each of these expeditions has a different scientific crew, but the ship personnel usually remains the same.  This crew is essential to the smooth running of the ship and includes: Commanding Officer, Executive Officer, Operations Officer, Navigation Officer, Safety Officer, Junior Officer, Engineering personnel, Deck personnel, Stewards (meal preparation), and Electronics personnel. 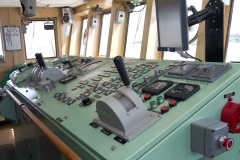 The Bridge – ship operations and navigation.

My stateroom on the Gordon Gunter.

I am getting to learn my way around the ship and am all moved into my stateroom. I was really surprised at how large it is!  I have a roommate – Kat, a graduate student, for the first leg of the trip and then Sarah, an intern, for our second leg.  We will make a stop in Woods Hole, Massachusetts on June 16th to drop a few people off and welcome aboard some new ones.  So far I have met several marine and bird scientists, a college volunteer, graduate student, and college intern. The science and NOAA crew are all very friendly and welcoming, but it is hard to sit here in port and am really looking forward to heading out to sea and learning all the science that I can share with my students.

Sunset outside the Gordon Gunter – waiting to leave port.

Did you know?  NOAA has its beginnings in as far back as 1807, when the Survey of the Coast was started as the nation’s first scientific agency.

One response to “Sue Cullumber: A Slight Delay and Eagerly Awaiting Departure, June, 5, 2013”