The primary mission of this cruise is to deploy and recover moorings in several locations in the Gulf of Alaska and the Bering Sea.  These moorings collect data for a group of scientist under the auspices of the Ecosystems & Fisheries-Oceanography Coordinated Investigations (EcoFOCI) which is a joint venture between the NOAA Pacific Marine Environmental Laboratory (PMEL), and the NOAA Alaska Fisheries Science Center (AFSC).  Participating institutions on this cruise include NOAA-PMEL, AFSC, Penn State, the National Marine Mammal Laboratory (NMML), and the University of Alaska (UAF). This interdisciplinary study helps scientist better understand the overall marine environment of the North Pacific.  This understanding will lead to a better management of the fishery resources of the North Pacific Ocean and the Bering Sea.

To ensure that time at sea is maximized for data collection, a day or so before leaving Seward, Alaska, the science crew begins assembling their various monitoring instruments under the directions of Chief Scientist for this project, William (Bill) Floering, PMEL.

Some of the equipment that will be deployed includes an Acoustic Doppler Current Profiler (ADCP), which measure speed and direction of ocean current at various depths.  This data helps physical oceanographers determine how organisms, nutrients and other biological and chemical constituents are transported throughout the ocean.  Argos Drogue drifters will also be deployed to help map ocean currents. Conductivity, temperature, and depth (CTD) measurements will be conducted at multiple sites providing information on temperature and salinity data.  Additionally, “Bongo” tows will also be made at multiple locations which will allow for the collection of zooplankton.  The results of this sampling will be used to characterize the netted zooplankton and help to monitor changes from previous sampling events.  In future blogs I will describe these instruments in greater detail.

The furthest extent of our mission into the Bering Sea is very much weather and ice dependent with much variation this time of the year in the North Pacific Ocean.  Current ice map conditions can be found at http://pafc.arh.noaa.gov/ice.php.

As I rode in the shuttle bus from Anchorage to Seward, Alaska on Friday, April 27, and then onto the pier where the Oscar Dyson was docked, I was immediately impressed by its size and overall complexity.

Upon arrival I was met by Bill Floering, Chief Scientist on the cruise.  He gave me a tour of the overall ship and then I settled into my room, a double.  Just like being back in college myself, and being the first to the room, I had my choice of bunks and therefore selected the lower bunk (I did not want to fall out of the top bunk if the seas turned “rough”).  Arriving early provided me time to become oriented on the vessel given that I have never been aboard such a large ship before. I also had the opportunity to walk into Seward, AK, with a member of the science team, for a dinner downtown with extraordinary views of the surrounding mountains. 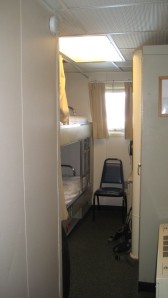 On Saturday, April 27, the rest of the science crew arrived and my roommate, Matthew Wilson, moved in.  Matt is from the Alaska Fisheries Science Center (AFSC) based in Seattle, Washington.  That evening we traveled into town again for another great dining experience…halibut salad with views of Resurrection Bay.

Sunday, April 28, was a busy day of sorting and setting up various instruments for deployment.  Winds were very strong, with snow blowing over the peaks of the mountains, glistening in the brilliant sunshine.

Monday, April 29, our day began with a safety meeting followed by our science meeting.  At that time we were assigned to our work shift.  I will be working from 12 midnight to 12 noon each day during the cruise.  Once the ship sets sail, the science crew is working 24 hours per day!