Today is our last full day at sea.  We have caught about 2,000 fish in the past week!  A lot of them were thrown back into the water because we only need to keep a fraction of them for the reef fish survey.  The fish that we keep are studied by the scientists for a few reasons.

First, every fish we catch is measured and weighed. 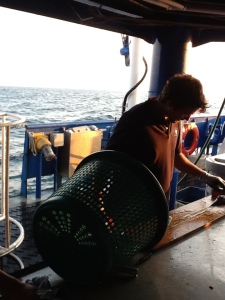 David, a fisheries biologist, measures every fish that we catch 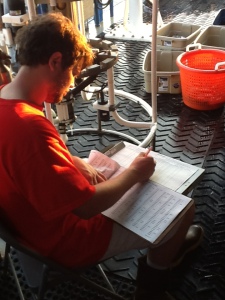 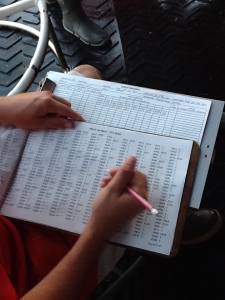 Every fish that we keep gets its own ID number and envelope.

After it gets dark we stop fishing and go inside to the lab to collect information about the fish we caught that day.  Every single fish that we keep gets its own ID number, and gets weighed and measured again.  We write everything down.  These notes are data. 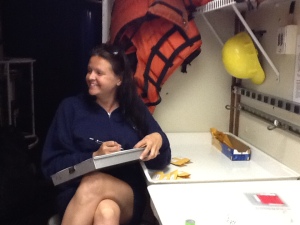 When you make observations using your senses you are collecting data too!  Can you think of a time you collected data or made an observation like a scientist?

After we  record the length and weight I give Stephen the envelope and the other scientists come get the fish.

Once all of the information is brought back to the scientists at the lab, they look at different parts of the fish using a microscope.  This will tell the scientists three main things…

3) Are these fish from all different families, or are they all related to each other?

Once the scientists answer these questions, they can decide if its okay for people to go fishing for certain types of fish, or if too many fish are being taken out of the ocean and need to be protected.  Right now fisheries are not allowed to take Red Snapper out of the Atlantic Ocean.  That fish is a very important part of our survey.

Special thanks to Captain Raymond and the crew and of the R/V Savannah and to Zeb, the chief scientist, and his team of scientists for a great experience!

This Red Snapper nearly knocked me over