Today we were in assembly mode and I spent the majority of my time on the flying bridge (top deck). With the help of several scientists, we cleaned and replaced the viewing seats, installed the “Big Eyes” – (the largest pair of binoculars I’ve ever seen), and assembled and tested the Turtle tracking antennas.  The “Big Eyes” will be used to help track and identify marine mammals, leatherbacks and birds near the boat.  This is especially important prior to and during the times scientists have equipment in the water so we don’t catch or injure these animals. The receiver will be used to track the Leatherback Sea Turtles who have a transmitter attached to their carapace. The good news is we are receiving reports that there is a Leatherback approximately 110 miles off the coast of Monterey – the bad news is he may not be there when we arrive.

Safety training During our first true “day at sea” we had two practice safety drills; a fire in the galley (kitchen) and an abandon ship.  The crew handled both drills quickly and efficiently.  The abandon ship drill was exciting. When the bell rang, everyone was responsible for his or her own billet (job duty). My billet required me to grab my life preserver and survival suit and muster to the O1 deck (report to an area for role call). 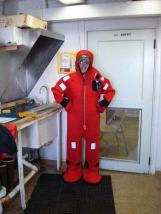 Training to be a VO – visual observer We started the day on the flying bridge. Karin Forney, marine mammal researcher, trained us on how to be a marine animal visual observer or VO for short.  During the first observing session, we only saw a few animals – sea lions and various birds.

I’m getting fairly good at spotting kelp beds (seaweed), however, the scientists are not interested in them, so I still need more practice identifying marine mammals.

By the afternoon, we started to see more marine life.  A large pod of common dolphins swam playfully near the ship.  This was a beautiful sight to see but not ideal for net testing. We waited 30 minutes without a mammal sighting then successfully tested the nets. As the scientists were pulling the nets aboard we spotted another smaller pod of common dolphins, some California sea lions and a small mola mola (sun fish).  All in all it was a good day! 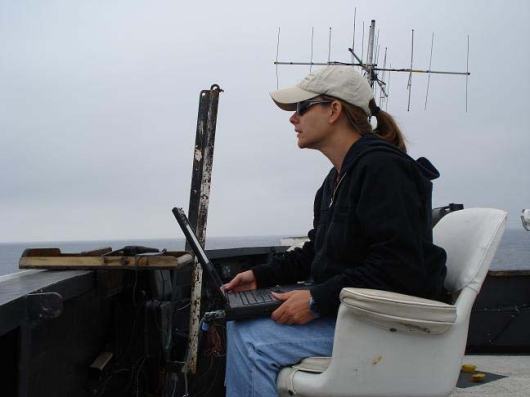