Though we were originally set to sail on Monday afternoon, predicted 10-15 foot swells for Monday evening delayed our departure from Newport, Oregon until Tuesday afternoon.  The extra time in Newport allowed me to spend some time in the Plotting Room aboard NOAA Ship Fairweather.  The Plotting Room is one of the main work areas for the hydrographers, the NOAA technicians who both plan the missions and then process data collected after each launch.

The Main Project Table in the Plotting Room

The West of Prince of Wales Island Project. Notice how each “sheet” is assigned a color.

One of the friendly surveyors, Bekah, gave me an overview of the upcoming project which will focus on the area west of Prince of Wales Island.  The hydrographic survey technicians first receive an assignment, known as a project, from NOAA.  Next, technicians, break each project into “sheets,” or smaller sections, which are assigned to each technician or NOAA officer.  From there, the technicians further break down the sheets into “polygons.”  The polygons are like mini-sections of a given area of the map, and are sized depending on a number of factors including the amount and distance from the shoreline as well as the depth.  The polygons are assigned one-by-one to the survey launches to complete.

One of NOAA’s primary goals with hydrographic surveying and updating the charts is to obtain more accurate data on the Pacific seafloor and its features in order to promote safe marine navigation.  NOAA is part of the US Department of Commerce, and so updating navigational charts will help improve safe passage of all ships, especially commercial cargo ships.  As commercial ships grow larger and heavier and global trade continues to increase, improved navigational charts allow for increased shipping drafts (how deep the vessel extends below the water, which is a function of how much cargo they can load), which in turn creates a positive economic impact for the national economy.

Today, NOAA Ship Fairweather uses sonar to measure seafloor depths.  Previously, hydrographers used lead lines.  Essentially, lead lines were dropped over the ship’s rail and lowered until they rested on the seafloor.  While lead lines are occasionally still used today in very shallow areas close to shore, creating new seafloor maps with sonar allows for much greater precision, are much less labor intensive, and allow for continually measuring the depth.

On Tuesday afternoon, at 14:00 (2pm), we set sail from Newport, Oregon and began making our way north to Port Madison, near Seattle Washington.  After spending a few days at dock in Newport, I was eager to get underway, and the rest of the crew, many of whom had been in Newport for much of the winter, also seemed eager to begin the season.  While the views leaving Oregon were spectacular, the wide open seas proved a bit of a challenge.  I quickly learned that heading to the open deck on the back of the ship, the fantail, was an ideal place to catch some respite from feeling seasick.  Later in the evening, the waves subsided a bit, and by morning the seas felt much calmer.

Each day, the POD (Plan of the Day) is updated with important meetings, mealtimes, and general updates.  Emergency responsibilities are also posted, and one of the first things we did once we were underway at sea was practice drills for a fire and abandon ship.  As part of the abandon ship drill, I had to practice putting on the “survival suit.”

The POD (Plan of the Day) 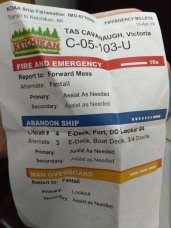 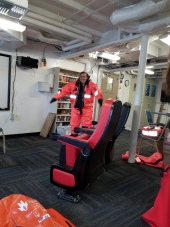 Most aboard NOAA Ship Fairweather work several four hour shifts or “watches” each day, and some may also work a few additional hours of overtime.  Perhaps for this reason, meal times seem a bit early with breakfast at 7am and lunch at 11am.  Dinner, when in port is at 4pm, and at sea, it’s at 5pm.   Meals are prepared in the ship’s galley (or kitchen), and served buffet style.  The crew eats together in the mess (or main dining area).  In addition to meals, snacks such as cereal, fruit, and icecream are available 24/7 and some additional options are available for those on night watches who may eat “night lunch.”  Meals are a great time to meet the many aboard Fairweather and better understand how the different teams–the wardoom, the engineers, the survery technicians, the deck, the stewards, the ET, and the visiting scientists–all work together. 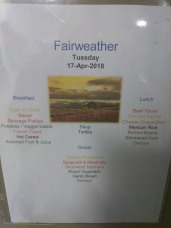 NOAA Ship Fairweather is celebrating its 50th birthday this year!  Fairweather was designed by the US Deparment of Commerce Maritime Administration and built in Jacksonville, Florida by Aerojet-General Shipyards.  Fairweather was commissioned in October 1968 and is homeported in Ketchikan, Alaska.  Fairweather’s sister ship is NOAA Ship Rainier which is also part of NOAA’s Pacific Fleet.

NOAA Ship Fairweather has a field season of about 220 days per year.  At 231 feet long, it can house roughly 57 crew and weighs 1591 tons!  While cruising, Fairweather averages 13 knots, and while surveying, the ship travels 6 to 10 knots.

By the way, you might be wondering what exactly is a knot.  As the story goes, ancient mariners used to tell how fast their ship was moving by throwing a piece of wood tied to a rope overboard and measuring how much time it would take the wood to travel from the bow (front) to the stern (back) of the ship.  According to historian Elizabeth Nix, by the 16th century, this method was updated to include knots tied at certain intervals in the rope that was thrown overboard.  Sailors began to count the knots to determine a ship’s speed, and eventually a “knot” became a nautical mile per hour.

Nautical miles, by the way, refer to the Earth’s circumference, and are different from “land miles” which reflect the distance it takes to walk 1,000 steps (according to the Romans) or 5,280 feet (according to Queen Elizabeth).  Today, one nautical mile is understood as 1,852 meters or 1.1508 miles.  Or, more practically, it is one minute of latitude (where 60 minutes of latitude = 1 degree).

A knot, then, is a measure of speed used by ships and planes.  A rate of one knot refers to covering a distance of one nautical mile in one hour.