View from the wet lab 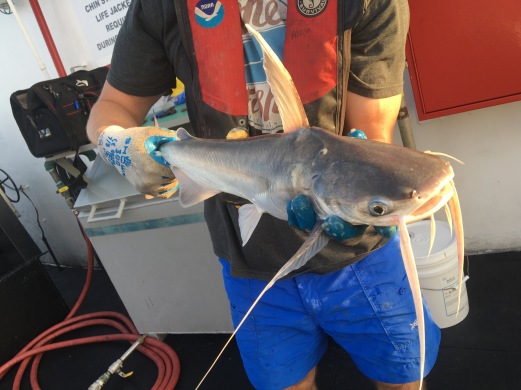 We have been experiencing some rocking and rolling out here due to the hurricanes that are occurring to the east and the west of us as we sit in the relatively calmer waters off the coast of Texas and Louisiana. We have experienced 6 – 8 foot waves so far on our survey and the ship is being maneuvered to try and find the calmest spots so we can continue to do our work.

So what makes a wave a wave?

Check out this link to learn what makes a wave a wave!

Waves are part of the experience. Below is a poem written by the scientists and crew of the Oregon II on an earlier survey. Here are a few vocabulary words that you may not know to help you interpret the poem.

Here is a poem written by some of the scientist and crew of the Oregon II about rough waters on an earlier expedition.

The crew knows he’s on the job,
when the Ship starts to bob.

They know he’s at the wheel,
‘cause on the hip she does heel.
Trough-Man

On the Deck the haul-back team does muster,
while on the Bridge he robs sleep with the bow thruster.

You’ll always wake up in a funk,
‘cause you’ve been rolled out of your bunk.
Trough-Man

Sometimes you may wonder if he can
find the trough in a mug or a coffee can.

On this Ship you can’t even shave,
‘cause you never know when she’ll hit another wave.
Trough-Man

When the boat’s wallowing like a stuck pig,
you know he’s on the Bridge doing a jig.

For the rail you will grab,
when the boat does its crab.
Trough-Man

When you’re eating off your neighbor’s plate,
you know he’s your Shipmate.

If you can’t hold your food down and your stomach is off,
you know your riding in the trough.
Trough-Man

This poem is to all boat drivers, because they are put in the position of going from point A to point B no matter the sea state.

We have had calm days where the water is like glass and other days with wind waves of up to 8 feet! I have come to appreciate the numerous handrails available all around the ship as well as learning to make sure my drawers and cabinets are secured. Nothing like waking up in the middle of the night with your drawers opening and closing! Also taking a shower in these conditions are quite the adventure in itself. The last few nights have felt like I am sleeping in a swinging hammock. There are also some nice features on the ship to keep items in place. 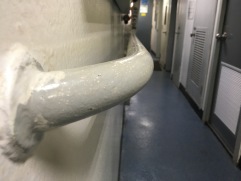 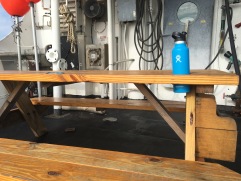 Here are some photos of the things I appreciate when the boat is rocking and rolling —  handrails that are located everywhere, hooks that keep doors open and holes in the picnic table to keep your drink from spilling!

An oceanographic front is an area where two distinct water masses meet. Here is the one that we encountered on this last station. Why are these fronts important to birds and marine life? Extra credit for this bonus question!

Question of the day:

Do waves transmit water or energy?