Although the scientists have not performed any fishing trawls since departing San Diego, there is a survey crew on board that has continuously been monitoring the water column for a variety of factors using acoustics and an instrument called a Conductivity/Temp/Depth (CTD) probe.

Last night I was able to observe the launch and retrieval of a small, handheld CTD probe.  It looks very much like a 2 ft torpedo. The electronics and sensors built into the probe measure such factors as salinity, sound speed, depth, and water temperature.  This smaller probe is launched off the tail of the boat and let out on a line of filament from a reel that appears very similar to a typical fishing reel.  It does not take more than a couple of minutes for the probe to sink to a depth of about 300 meters.  Data is collected from the probe at various depths on the way down.  Once the probe has reached its target depth, it is simple reeled back in using a winch to retrieve it.  This requires quite a bit of energy as the probe is deployed with enough line for it to end up about 3 miles behind the ship.  The data from this probe is then blue-toothed to the program used by those monitoring the water column acoustically.  It help the techs make corrections in their acoustical readings.

The Reuben Lasker also carries a larger version of the CTD probe with the additional capabilities such as water collection at various depths.  However, this version requires the ship to be stationary.  Taking measurements with the unit slows down the work of the day as each stop takes about 30 minutes from launch until retrieval.  The launch of the larger CTD can be seen below. 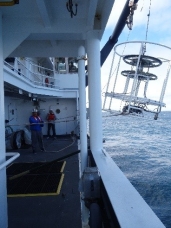 CTD being landed back on deck

The data from the CDT probe is recorded real-time on the survey team’s computers.  Below you can see how this data presents itself on their video screens. 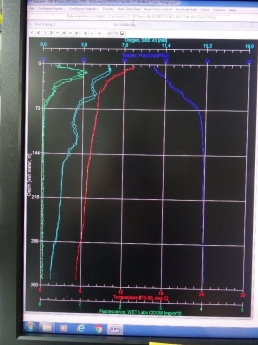 Key for CTD Data: Temperature is in red, Salinity in blue, Fluorescence in green

On the left video display you can see that there are several variables that are plotted against a depth vs. temperature. The green line tracks fluorescence (a measure of the chlorophyll concentration); the light blue line tracks dissolved oxygen; the red line represents temperature; the blue line is for salinity.

Extension question for my students reading this:  What correlations or relationships do you see happening as you observe the change in variables relative to changes in depth?

Here is the route taken by the Reuben Lasker during the past 24 hours or so.  As you can see from the chart, the ship has now reached the northern-most end of Vancouver Island.  This is where the CDT recordings, marine mammal watching, deployment of two sets of plankton nets (to be explained later) and fish trawling will begin along the predetermined transect lines.

Note at the base of the screen the other parameters that are continuously recorded as the ship moves from place to place.

The action on-board is increasing dramatically today.  We have arrived at our outermost destination today, along the northernmost coast of Vancouver Island.  The sights from the bridge are amazing…all this blue water and rugged, pine covered coastline.  I am still waiting for that orca whale sighting!

The waves are up today but I’m holding my own.  Yeay!  Especially as the night fishing will begin in a few hours.

Unique activity of the day – I just finished a load of laundry!  The ship possesses 3 small washer/dryer units so we can redo our towels and whatever else we have used up during the course of this first week.  How serviceable can you get! I’ll retrieve mine as soon as dinner is over.  We have set meal hours and if you miss…it’s leftovers for you!  Best part of this is I am actually ready to eat a normal meal, even with the ship rocking the way it is today.

I have now been assigned deck boots and a heavy duty set of rain gear to cover up with when the fish sorting begins.  I can’t wait to see what all we pull up from these nutrient rich waters!

Much of the data collected by the CTD and acoustic equipment from the Reuben Lasker is entered into a large data set managed by CalCOFI (California Cooperative Oceanic Fisheries Investigation).  Anyone interested in utilizing and analyzing this data can access it via the organization’s website located here.  There is an incredible amount of information regarding the work and research completed by this group found on this site. Check it out!