Science and Technology Log:
As I mentioned in an earlier post, flexibility is key. Things don’t always go according to plan. Originally, we were going to head northeast from Morehead City Port, but the weather did not cooperate with us. We headed south to avoid a large storm, and then moved closer inshore. This forced us to choose some different areas to sample. Most of our sample sites are situated over the continental shelf between Cape Fear and Cape Hatteras. Tomorrow we hope to move to deeper waters beyond the shelf break.

Map of Pisces route so far. Image from Shiptracker.

On July 23, we lost a trap. After one of the deckhands threw the hook out to catch the buoy rope and started the winch, the rope went taut and then snapped. Occasionally this happens because the traps can shift and become wedged under or hooked onto a rocky ledge on the seafloor. We do our best to avoid this, but it happens. This is why it is important to have extra traps, cameras, and camera housings on board. 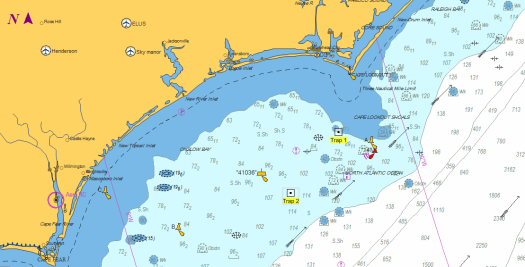 We planned to retrieve our trap the following day, but the storm chased us out of the area. Two days later, we lost a second trap! Unfortunately, this one was too deep to recover on a dive. The traps we deploy have zinc clasps that dissolve after ~24 hours, so fish can eventually exit the traps on the off chance that we are unable to retrieve them. Still, we don’t want to simply abandon traps on the seafloor or run short on gear, so we made plans to retrieve the first trap. We just had to remain patient and hope for calmer seas. Finally, our window of opportunity opened up today.

The small boat is on a davit on the 01 deck.

A small boat is located on 01 deck near the stern of NOAA ship Pisces. The deck chief oversees operations as it is lowered for the divers, the dive master, and deckhands to board. They take an inflatable buoy and rope with them, and then head out to the coordinates of the trap. The divers descended ~20 meters to the shelf where the trap was indeed wedged on a rocky ledge. First, the divers removed the two GoPro cameras that were attached to the trap. Next, they secured a rope attached to a buoy on the trap. The ship will then be able to use this buoy to retrieve the trap as typically done. The divers ascended the line and were picked up with the small boat.

The small boat returns after successfully finding the trap.

The deckhands then attached our standard buoys to the rope, and returned to the Pisces. The divers climbed up a rope ladder on the starboard side of the ship, and the small boat was hoisted up. We then hauled up the missing trap like we would any other. The trap was empty, and all of the bait was gone – not surprising after a 4-day soak!

I make a point to stand near the bow of the ship and watch the sea and sky for a while every day. I usually see some flying fish, which are fun to watch. They zip out of the water, dart across the waves, and then dive back under. One of them landed on deck after a storm, so I had a chance to see one up close. 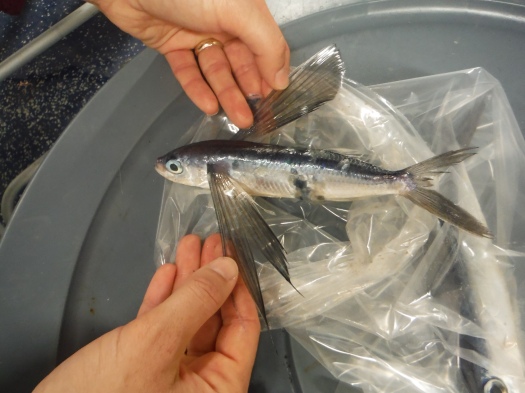 The skies are beautiful, too. I have seen some impressive clouds and gorgeous sunrises and sunsets. The view is completely unobstructed, so I can just take it all in without distraction. I find it all very peaceful.

The skies at sea are stunning.

After otoliths and tissue samples are collected from the fish we keep, the fish are filleted, frozen, and donated to local food banks.

Collecting tissues from a fish.