Our current location and weather can also be seen at NOAA Shiptracker: http://shiptracker.noaa.gov/Home/Map

Much like the the lab reports we do in class, hydrographers have a tremendous amount of work to do prior to going into the field.  As we make the transit from Rainier’s home port of Newport to our charting location of Kodiak Island, hydrographers are working long hours in the plotting room planning their season’s work. Today’s log is about a software program called CARIS that hydrographers use to plan their project and guide data collection through the season.  This morning, Ensign Micki Ream planned her season’s work in the Plot Room on CARIS.  This afternoon, she walked out the plot room door and onto the bridge where she navigated Rainier through the narrow Blackney Passage of the Inside Passage.   Prior to taking over the bridge, I watched as Ensign Ream as she plotted her project area for the season.  She has been assigned Cape Uganik, an area of North Kodiak Island in the vicinity of Raspberry Island.  The area was chosen to survey due to boat traffic and because the last survey completed was in 1908 by lead line.  Here you can see the original survey report and an image of how data was collect at that time (1908 Survey of Ensign Ream’s Survey Area). Ensign Micki Ream explained that the charts were called “sheets,” because originally, they were sheets of paper, sent out with the surveyor into the field.  While we still call them sheets, they are now in electronic form, just like the sheet below representing one of two project areas ENS Ream will most likely work on this summer. 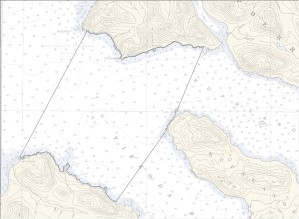 Ensign Ream’s task is to break this large polygon into smaller manageable parts. Challenge:  print a copy of this map and come up with 30 smaller polygons to assign to your team to survey before you scroll down to see Ensign Ream’s plan.

Why make polygons instead of sending several launches out to your work area and tell them to start on opposite ends and meet in the middle? The polygons are a way for hydrographers to break a large amount of work into manageable tasks. Commander Rick Brennan, the Commanding Officer, explains “polygons are designed based upon the depth of the water, the time it will take to complete, and the oceanographic condition, particularly speed of sound through water.  Areas that are suspected to have a higher variability in sound speed will get smaller polygons to manage errors from sound speed.”

Also, imagine sending several launch boats out into a large area to work without telling them where to go. Polygons provide a plan for several boats to work safely in an area without running into each other.  It allows areas to be assigned to people based upon their skills.  The coxswains, boat drivers, with a lot of experience and skill, will take the near shore polygons, and the newer coxswains will take less hazardous, deeper water.

Another reason to break your sheet into polygons is to maintain team moral.  By breaking a large task into small assignments people feel a sense of accomplishment. As she divided her large polygon into 30 smaller polygons, Ensign Micki Ream kept in mind many variables. First, she considers the depth of the water.  The sonar produces a swath of data as the survey vessel proceeds along its course.  As the water gets deeper, the swath gets wider, so you can make a bigger polygon in deeper water. As she drew her polygons, she followed contour lines as much as possible while keeping lines straight.  The more like a quadrilateral a polygon is, the easier it is for a boat to cover the area, just like mowing a rectangular lawn. In her polygons, she cut out areas that are blue (shallow), rocky areas and kelp beds, because those areas are hazardous to boats.  While the hydrographer in charge and coxswain (boat driver), should use best practices and not survey these areas by boat, sometimes they rely on the polygon assignment.

Here is Ensign Ream’s Proposal for how to complete this summer’s work. How does it compare to your proposal?

Once she has drawn up her plan, Ensign Micki Ream roughly measures the average length and width of her polygons and puts that data into a Polygon Time Log form that a co-worker created on Rainier last season.  The form also takes into account the depth and gives an estimate of time it will take to complete the polygon.  This Time Log is just one of the many pieces of technology or equipment that crew invents to make their lives and jobs easier.

Polygon Time Logs estimate how long it will take to complete a sheet.

The fun part of this process is naming your polygons so that hydrographers in the field can report back to you their progress.  Traditional alphabetical and numerical labels are often used, but Ensign Micki Ream is naming some of her polygons after ’90s rock bands this year. Once the polygon is named, the sheet manager, Ensign Ream, develops a boat sheet for a hydrographer in charge (HIC):  this is their assignment for the day. Typically, they send out three to four people on a launch, including the HIC, coxswain and an extra hand. There are always new people aboard Rainier, so there are often other people in the launch being trained.  There are enough immersion suits for 4 people but ideally there are three people to help with launching the boat and completing the day’s work.  Communication between the HIC and coxswain is essential to get data for ocean depths in all areas of their polygon as they determine the direction to collect data in their work area.  Now, at least, the hydrographer and coxswain know where to start and stop, and are confident that their sheet manager has done her best to send them into a safe area to collect the data needed to make new charts.

Since Ensign Ream’s polygon plan is an estimate, the time to complete each polygon may be longer or shorter than estimated.  Variables such as the constantly changing depth of the ocean, weather, experience and equipment of the crew collecting data, and a myriad of other variables, known and unknown, make scheduling and completing surveys a constantly moving target.  There are two guarantees however:  flexibility is required to work on the crew and ultimately winter will force a pause to Rainier’s work.

Spotlight on a Scientist

Although I have been on Rainier for only several days, I am blown away by the incredible skills crew members acquire in short amounts of time.  Ensign Micki Ream is the perfect example:   In January, 2013, she joined the NOAA Corps which provides operational support for NOAA’s scientific missions.  During a six month officer training, she was trained in the basics of navigation. On June 2, 2013, she joined Rainier crew. In February, 2014 NOAA sent her to a one month Basic Hydrography School where she learned hydrography principles and how to use various software programs. Throughout her short time at NOAA, she has had significant and varied on the job training with scientific, managerial and navigational work.The rest of her skills are on the job training with an end goal of Officer of the Deck (similar to a mate in commercial sailing) and Hydrographer in Charge.

Here, Ensign Ream is modifying polygon names from 90’s rock bands to the 12 Days of Christmas. There is plenty of room for creativity!

Ensign Micki Ream does have a background in science which she is putting to use every day.  Originally from Seattle, she started her career with NOAA in June, 2009, after obtaining a Marine Biology degree at Stanford University.  Her first position was with the Office of National Marine Sanctuaries Program, which provided her with an internship and scholarship to acquire a Master’s Degree, also from Stanford, in Communicating Ocean Science. Just a little over one year after coming to NOAA Corps, she is a hydrographer in training and safely navigating a very impressive ship as part of a bridge team, including highly skilled navigational experts such as Ensign J.C. Clark and Commander Brennan.  Where else could you get training, experience and on the job support in so many diverse areas but with NOAA Hydro? 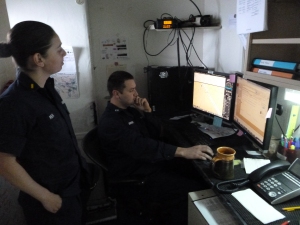 Ensign Ream consults with Lieutenant Russel Quintero, the Field Operations Officer, about the best way to navigate through a narrow passage during her upcoming bridge watch.

The food is absolutely amazing on board.  Tonight’s dinner options were roast prime beef, cut to order, au jus, creamy smoked salmon casserole, farro vegetable casserole, baked potatoes with fixings, asparagus and several different kinds of cake and fruit. In the evenings, snacks are also available.  My biggest challenge has been to pace myself with the the quantity of food I eat, particularly since taking long hikes after dinner is not an option. I feel very well cared for aboard Rainier. 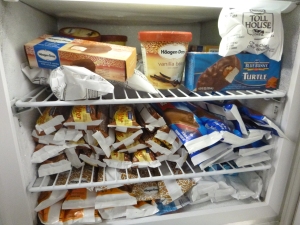 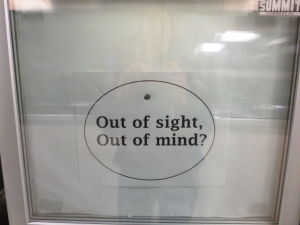 This is the front door to the snack freezer. For me, the answer is clearly “No.”