Today’s lesson is all about the lovely object of FRV (fisheries research vessel) Oscar Dyson’s affection on the summer survey: Theragra chalcogramma, also known as pollock, walleye pollock, Pacific pollock, or Alaska pollock. However, the word pollock could actually refer to the Pollachius genus, which includes Atlantic pollock, but this blog is about the Pacific variety.

DYK? (Did You Know?): biological organisms are classified using a system created by Carolus Linnaeus. Theragra chalcogramma refers to the genus and species classification for Pacific Pollock, just as Homo sapiens is used to classify humans. This is known as binomial nomenclature. You will see this naming throughout the blog. One mnemonic device to remember the order of classification (Kingdom –> Phylum –> Class –> Order –> Family –> Genus –> Species)? King Phillip Called Out For Greasy Spaghetti!

All pollock are part of the cod family Gadidae. They can grow to a maximum of over 3 feet (91 cm) but will be about 12-20 inches (30.5-50.8 cm) in length on average. Their speckled color pattern allows them to blend in with their surroundings to avoid predators.

This is the main area where pollock can be found.

Where do we find them?
Alaska pollock are a semipelagic schooling fish closely related to Atlantic cod, which means they mainly swim together in the middle of the water column. Alaska pollock are found throughout the northern part of the Pacific Ocean, most notably in the Bering Sea, but also can be found in the Gulf of Alaska.

What do they eat?
Juvenile (younger) pollock eat zooplankton and small fish whereas older pollock eat other fish including juvenile pollock. We have seen some very full stomachs when sexing the pollock this week!

Who studies them?
Scientists are constantly conducting various pollock surveys in the Arctic area. The Alaska Fisheries Science Center (AFSC) as well as the Alaska Department of Fish and Game are two places that will use both acoustics and midwater and bottom trawls to determine the relative abundance and more during a pollock survey. You can read more about the AFSC walleye pollock research here. This type of research allows for decisions to be made with respect to how much pollock can be harvested each year.

How are they harvested?

Pollock are harvested by trawlers. This means that the ship has a large net (see my previous blog on trawling) that is towed behind the vessel in midwater. Some vessels (not the scientific ones like the Oscar Dyson) are “catcher-processors”, which means that they will both catch pollock and process them at sea. Other ships are just “catchers” and will then transfer their loot to a shore-based processor or a “tramper” vessel. In Dutch Harbor and Unalaska, there are multiple seafood plants: UniSea, Westward, Alyeska, Icicle, Trident, and Royal Aleutian Seafoods. The “trampers” are most often foreign vessels that are not able to dock in the United States but will instead anchor in a place such as Captains Bay in Dutch Harbor and await a commercial fishing vessel to unload their catch. The tramper can then return back home to somewhere like South Korea with the seafood.

DYK? The two-tone color on the trampers is helpful to know how “full” the ship is – the less red you can see above the water, the more fish that are onboard! 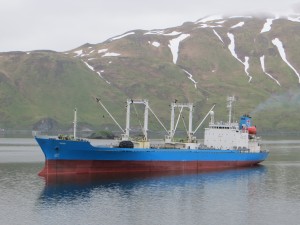 This is a foreign “tramper” vessel, sitting in Captains Bay in Dutch Harbor, Alaska

In the United States, there is a 12-mile boundary from the shore that is marked on nautical charts to allow individual states to determine the fishing rules. They will dictate how many of each species can be kept, what months fishing can occur, and what size fish must be thrown back. Foreign ships can pass through these areas, but are not allowed to fish or look for resources (hence the “trampers”). Outside of this exists the exclusive economic zone, or EEZ, 200 nautical miles off shore. Permits are required to travel or fish through a foreign EEZ. For example, on Leg 3 of the Pollock survey, the Oscar Dyson is set to cross the International Date Line into Russian waters, which requires a permit.

Fun Fishy Facts
* You’ve actually probably eaten Alaska pollock and not even known it! It is used to make imitation crab meat (surimi) and fish sticks, amongst other things.
* Compared to Atlantic pollock, Alaska pollock has a milder taste, whiter color, and lower oil content.
* Alaska pollock is considered to be an eco- and ocean-friendly choice due to abundance and the fact that trawling does not cause significant habitat destruction.
* Alaska pollock is the largest fishery in the U.S. by volume and one of the best managed fisheries in the world.

This photo showing Alaska pollock is from a midwater trawl on the Oscar Dyson on July 6, 2012 using the AWT (Aleutian Wing Trawl) at about 100 meter depth.

I last posted on the Fourth of July, before our big “pyrotechnics demonstration” to celebrate the holiday. What a great ending to a beautiful day filled with blue skies!

I’ve finally gotten my “sea legs”, which I’ve been told isn’t how well you can walk in a straight line on board, but how well you can maintain standing position and move with the rolling, pitching, and yawing of the ship. I may not have mastered the treadmill yet, but I’m quickly learning to enjoy the elliptical again.

During the night shift on the Fourth of July, my wonderful roommate Carwyn came to tell me they were doing a bottom trawl if I wanted to come check it out. The lost hours of sleep were well worth the vast array of new critters and creatures that came up in the net! I plan to do a future blog on what we found, so be sure to look for that.

In adding to the awesome experience I’m having on board, I’ve gotten some great news online in the past few days. First, my amazing AP chemistry class earned all 3s, 4s, and 5s on the AP chemistry exam they took back in May (scores were just posted online for teacher access). Then I received an e-mail with a job offer to teach chemistry and honors biology at La Plata High School in La Plata, Maryland, after having a phone interview from the Anchorage airport the day I was flying out to Dutch Harbor. This helped relieve a little bit of stress from not having a full-time job offer after my big move to Maryland from Tennessee and helped to confirm that teaching high school is what I should be doing with my life!

Animal Love
I have been spending plenty of time on the bridge, up above that on the flying bridge, and looking out my stateroom window for something in the water other than birds. Today was the day I finally saw something (although this was thanks to ENS Kevin Michael coming to get me and show me)!

A Dall’s porpoise swimming next to the Oscar Dyson around 6am on July 6, 2012

They resemble a killer whale in coloring and have a very thick body and smaller head, ranging through much of the northern Pacific Ocean and nearby seas (like the Bering Sea). Lucky for me!