Setting up the lab

There is a lot of unpacking and setup that has to be done on a scientific cruise like this one. Researchers were busy today getting schedules setup, equipment working and orienting themselves to their workspaces. We are now steaming directly to 0o, 23oW to service a buoy in the PIRATA backbone that has not been transmitting data since 21 June 2009.

Yesterday, I wrote about PIRATA (Prediction and Research Moored Array in the Atlantic). Another project that is also going on simultaneously is the Aerosol and Ocean Science Expedition (AEROSE).  Saharan dust storms are estimated to inject three billion metric tons of mineral aerosols a year into the troposphere. The aerosols impact precipitation, fertilize the ocean, and change the air quality and impact ecosystems in the Caribbean and the US eastern seaboard. Red tides, increased rates of asthma and changes in precipitation in the eastern Atlantic and Caribbean have been associated with this dust from the Sahara. The data collected from this cruise will help us understand better the impact of his Saharan dust on the Caribbean and the US eastern seaboard. 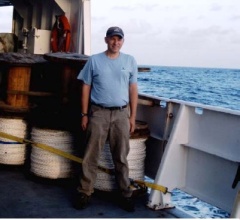 Here I am out on the back deck.

One must be prepared for emergencies at sea and today we had an abandon ship drill and a fire drill. There are 49 people aboard the Ronald H. Brown and it is important to know what do in case of an emergency and make sure everyone is accounted for.

We got underway from Barbados yesterday afternoon and the seas were described as being a bit “lumpy”.  I noticed little by little people seemed to disappear and was wondering what was going on and then it hit me.  Nausea, cold sweats and not being to get comfortable at all.  I got real sleepy and found a spot in the library and crashed for a couple hours. There is really no place to go. I woke up around dinner, took some seasickness medicine and hung out for the rest of the evening. Believe me, I was not the only one trying to get their sea legs.  There were very few people around. It takes time for the body to adjust to the rocking of the boat and some adjust faster than others.  This morning, I feel much better. 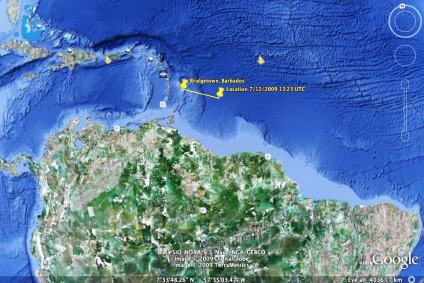 The course we have taken since we departed from Bridgetown

Sunset from the back of the ship