Today we will be interviewing Dan Wolfe, a senior meteorologist for the National Oceanic and Atmospheric Administration—NOAA for short.  Standing an imposing 6’3”, it seemed only fitting that our next scientist should be studying the heavens.  Mr. Wolfe is a 30-year veteran of NOAA and has been a scientist for the past 31 years.  Mr. Wolfe entered the Coast Guard in 1969 immediately after graduating high school.  He was initially assigned to the Coast Guard icebreaker “Glacier” transferring to the oceanographic unit where he staged scientific experiments.  He traveled to the Arctic and it was there that he discovered his soon to be life long passion for the atmosphere and all that is in it. Mr. Wolfe was a trained scuba diver while stationed on the Glacier. After leaving the Coast Guard he attended Metropolitan State College where he earned his degree in meteorology.  He has the distinction of being the first student to graduate in meteorology at this college.  It was while at Metropolitan College that Mr. Wolfe became a coop student working for NOAA. After earning his degree he went to work for NOAA as a meteorologist where for the next 30 years he has become one if its leading atmospheric scientists.  After seven years on the job he decided that he wanted to know more and enrolled at Colorado State University where he earned his masters degree.

Mr. Wolfe is one of the few individuals who has worked in BOTH the Arctic (North) and the Antarctic (South) (not just Antarctica but actually at the South Pole). His work has taken him to the depths of the Grand Canyon and to the Arctic more times than he cares to remember.

One of his more exciting job assignments with NOAA is managing a 1,000-ft research tower just off of I25 north of Denver Co.  When I asked Mr. Wolfe what message he would like to give to upcoming scientists he replied, “Kids should seek out paid/or unpaid internships while in high school. Look for internships within your community in careers that you think you might like.  This gives you the opportunity to try a job before investing money and time in college in a future you may not enjoy. If you try a job and discover you don’t like it, try something else until you find something you do like.  Be sure to give the job a chance though.”

One important scientific instrument used by a meteorologist is the radiosonde (pronounced radio sond). This device measures relative humidity, temperature, barometric pressure, and winds by utilizing the global positioning satellite system.  The radiosonde is battery activated then secured to a large helium balloon.  It is then released where it begins its ascent into the upper atmosphere, measuring humidity, temperature, and pressure sending these data back to the scientist via a digital radio frequency. Depending on the balloon used, these radiosondes can obtain heights in excess of 6 miles. The atmospheric data collected on this cruise will be shared with other scientists to help improve global weather computer models.

There is no experiment as these data are transmitted via satellite link immediately after the flight is finished to the National Center for Environmental Prediction to be fed into their continuously running forecast models.

Ask the students, “What is weather?”  “Why is it important to predict the weather?” Have the students take a piece of drawing paper and divide it into four equal parts.  In each part have the students draw and color four different types of weather common to where they live.  Example could be sunny, rainy, partly cloudy, and snow.

Why do we use calibrated thermometers to measure air temperature?   Ask students to answer on paper whether the classroom is hot, warm, cool, or cold and to estimate the actual temperature of the room.  Then compare the students’ answers to the actual temperature.  Then discuss the importance of a “standard.”  Without this “standard” scientists around the world would have no way of communicating what the atmosphere is doing.

Everyday we hear on the radio, television, or newspaper that it will be sunny, partly cloudy, partly sunny, etc.  How do meteorologist arrive at this? Today we will learn how.

Divide the sky into eight parts.  Examine each part and count how many squares have clouds. There is no hard and fast rule on what to do with partially filled boxes

No squares having clouds-Clear or Sunny

One to two squares having clouds-Mostly Clear or Mostly Sunny

Three or four squares having clouds-Partly Cloudy or Partly Sunny

Eight squares having clouds-Overcast or Cloudy Take the sky photo below and print it out. Draw a grid like the one above on top of the sky photo. Have the students write down what they think the day is.  Then compare the student’s answers. Is this an exact science?

Have your teacher take photos of the weather in your area and do your own. 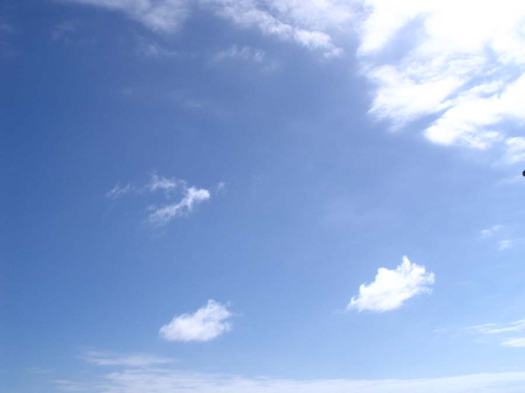