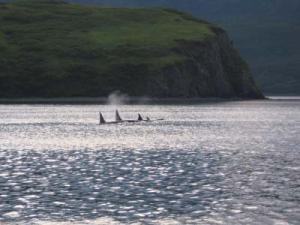 A pod of Orcas (Orcinus orca) seen off the ship

I was out on another survey boat today from 0800 to 1630.  It was a long day since we were running rather long lines using the hull-mounted (on the bottom of the boat) Elac multi-beam echo sounder system, which is used to obtain full-bottom coverage in depths ranging from 40-400 meters. The other day when I was out the sonar used was called a Reson, which used to obtain full-bottom coverage in depths ranging from 4-150 meters. The lines took about 40 minutes each to do due to their lengths as well as the fact that we couldn’t go above 8 knots. The coxswain today, Ken Keys, allowed me to drive the boat for a while which I thoroughly enjoyed. Ken did a great job teaching me how to stay on the lines and turn from one line to another. I was very happy when I completed one line and made the turn to another one successfully with no help.

A minimum of 12 Orcas if you count the fins

At about 2200 I was on the bridge chatting when Lieutenant (LT) Ben Evans opened the door and informed me that there were Orcas off the stern of the ship. Once I retrieved my camera, I joined some other crewmembers for about 20 minutes watching the pod (group) of Orcas swim through the cove which we are anchored in. There were at minimum 15 Orcas, maybe more.  It appeared that the pod was perhaps hunting salmon or some other fish.  Orcas are also known as killer whales, however, they are not really whales.  They are in fact the largest members of the dolphin family (Delphinidae).  They are called killer whales because they attack and consume whales or other large prey, such as sea lions and seals.  They’ve also been known to feed on river otters, squid, and several species of sea birds.  The Orcas we were watching displayed characteristic hunting behavior since they stayed in their pod and a smaller group hung back in shallower waters to possibly chase the fish into the deeper waters where the rest of the pod was. They often feed in this cooperative manner.

Every job on the ship has so many details to it.  Initially one might think they could do the same job easily.  It has been quite an awakening for me to learn just how much goes in to all of the various jobs on the RAINIER. Everyone has been so patient and excellent at demonstrating and explaining things to me.  Many of them would be excellent classroom teachers.  Ken did a great job today getting me relaxed and comfortable with the task of driving the survey boat on the line.  Thank you Ken! •

Seeing the Orcas this evening was one of those moments where I stood back and just lived in the moment.  It was truly amazing.  Everyone on the ship that was watching was silent as we listened and watched the Orcas swim through the water, blow water out of their blowholes, flap their tails (tail lob), and occasionally jump straight up out of the water (called a spy hop).  Spectacular!

Who’s Who on the NOAA ship RAINIER?

Since March 2004, Tonya Watson has been working for NOAA aboard the ship RAINIER. She originally began working in Engineering and in September 2005 she joined the Survey Department.  Currently she is a Hydrographic Junior Survey Technician (HJST). Recently she and her husband relocated their home to Phoenix, AZ, however, Tonya has been on the ship working since her move.

In her previous life, Tonya spent 4.5 years in the Navy working with passive sonar.  She has an A.A. degree from Shasta College in California and has studied biological oceanography at Chico State in California and Auburn University in Alabama.  Her Navy experience definitely helps her with the hydrographic survey work she is now doing with NOAA.

Tonya enjoys her work very much.  She really likes to go on the survey launches, seeing wildlife, being out on the ocean, and traveling to new places.  In her down time she likes to read, watch movies, listen to music, water ski, and bike ride.  Occasionally, Tonya says, the logistics of ship life and following strict schedules can be challenging.

There are some very important skills needed for the type of work Tonya does.  In her opinion, reading and writing skills are imperative.  Individuals need to be able to communicate effectively and fill out various forms.  In addition, keyboarding/computer skills are also needed. Individuals should be able to display self-discipline, be dependable, and have good people skills.  On the ship, many people rely on each other to carry out a task successfully.