Light and sound. LIDAR and RADAR. Both of these are used by scientists to observe the world. RADAR uses radio waves and LIDAR uses light waves. In this case, Brandi and Scott, from ETL in Colorado, use light waves, rather than sound waves, to observe clouds. They have a fully equipped van that was placed on the deck of the BROWN back in Seattle. Their major interest is observing the water vapor and wind velocity below and within stratus clouds. The instruments measure from 300 meters off the surface of the ocean up to about 4000 meters in the atmosphere.

Clouds have different functions. Depending upon how far they are away from the surface and what they are made from, clouds can act as a barrier to heat energy from the sun or as a blanket to keep heat trapped below.

Think of being in a hot desert. You would probably put on a light cloth to keep the burning sun out and keep you cooler. When the temperature drops though, you would want that cloth to keep your body heat in and not let it escape. Clouds are a lot like that. Mother Nature does a good job of keeping the planet at the right temperature. Now scientists want to figure out how she does it.

Brandi and Scott are working to collect lots of data that other scientists will use to make weather predictions. You can imagine that all the data that the ETL groups pull together from this trip could provide atmospheric scientists with lots of information to keep them busy for a long time.

Brandi sits inside the fully-equipped van located on the deck of NOAA Ship RON BROWN.

Brandi from ETL works with the LiDAR equipment mounted on the van. 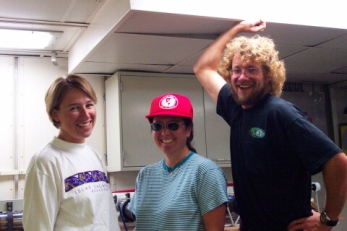 In the evenings many of the scientific members as well as crew members enjoy playing games or cards, reading, or doing needlepoint. However the primary form of entertainment on the BROWN is watching videos. There is a big screen TV in the lounge. Crew member Mike puts out a schedule for the week of the videos that will be shown each night so you can plan ahead. He has hundreds and hundreds to choose from! Crew member Dave opens the ship store for us to buy popcorn or candy. The profits made at the store help to purchase new videos.

Question of the day: Why is it important for all the “portholes” (windows) on the ship to be covered during the night?