What Makes Up an Ecosystem? Part III Zooplankton

The North Gulf of Alaska Long-term Ecological Research Project collects zooplankton in several different ways.  The CalVET Net is dropped vertically over the side of the boat to a depth of 100 meters and then retrieved.  This net gives researchers a vertical profile of what is going on in the water column.  The net has very fine mesh in order to collect very small plankton.  Some of these samples are kept alive for later experiments. Others are preserved in ethanol for later genetic analysis. One of the scientists aboard is interested in the physiological details of what makes copepods thrive or not.  Copepods are so important to the food webs of the Gulf of Alaska, that their success or failure can ultimately determines the success or failure of many other species in the ecosystem.  When “the blob” hit the Gulf of Alaska in 2014-2016, thousands and thousands of sea birds died.  During those same years, copepods were shown to be less successful in their growth and egg production.

The second net used to collect zooplankton is the Multi-net.  We actually use two different Multi-nets.  The first is set up to do a vertical profile.  In the morning, it’s dropped vertically behind the boat.  Four or five times a night, we tow the second Multi-net horizontally while the boat moves slowly forward at two knots.  This allows us to collect a horizontal profile of plankton at specific depths.  If the water depth is beyond 200 meters, we will lower the net to that depth and open the first net.  The first net samples between 200 and 100 meters, above 100 meters we open the second net.  As we go up each net is opened in decreasing depth increments, the last one being very close to the surface.  Once the net is retrieved, we wash organisms down into the cod end, remove the cod end, and preserve the samples in glass jars with formalin. In a busy night, we may put away twenty-five pint-sized samples of preserved zooplankton.  When those samples go back to Fairbanks they have to be hand-sorted by a technician to determine the numbers and relative mass of each species.  We are talking hours and hours of time spend looking through a microscope.  One night of work on the Tiglax may produce one month of work for technicians in the lab.

Underwater footage of a Multi-net triggering.

The last type of net we use is a Bongo net.  Its steel frame looks like the frame of large bongo drums.  Hanging down behind the frame is two fine mesh nets, approximately seven feet long terminating in a hard plastic sieve or cod end.  Different lines use different nets based on the specific questions researchers have for that transect line or the technique used on previous years transects.   To maintain a proper time series comparison from year to year, techniques and tools have to stay consistent.

I’ve spent a little bit of time under the microscope looking at some of the zooplankton samples we have brought in. They are amazingly diverse. The North Gulf of Alaska has two groups of zooplankton that can be found in the greatest abundance: copepods and euphausiids (krill.)    These are food for most other animals in the North Gulf of Alaska.  Fish, seabirds, and baleen whales all eat them.  Beyond these two, I was able to observe the beating cilia of ctenophores and the graceful flight of pteropods or sea angels, the ghost-like arrow worms, giant-eyed amphipods, and dozens of others. 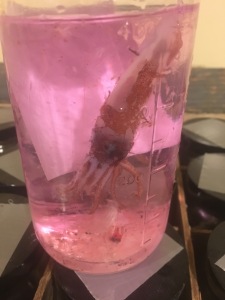 Deep sea squid, an example of a vertical migrator caught in our plankton trawls

By far my favorite zooplankton to watch under the microscope was the larvae of the goose neck barnacle.  Most sessile marine organisms spend the early, larval stage of their lives swimming amongst the throngs of migrating zooplankton.  Barnacles are arthropods, which are defined by their exoskeletons and segmented appendages.  Most people would recognize barnacles encrusting the rocks of their favorite coastline, but when I show my students videos of barnacles feeding most are surprised to see the delicate feeding structures and graceful movements of this most durable intertidal creature.  When submerged, barnacles open their shells and scratch at particles in the water with elongated combs that are really analogous to legs. The larva of the goose neck barnacle has profusely long feeding appendages and a particularly beautiful motion as it feeds.

We have to “fish” for zooplankton at night for two reasons.  The first is logistical.  Some work needs to get done at night when the winch is not being used by the CTD team.  The second is biological.  Most of the zooplankton in this system are vertical migrators.  They rise each night to feed on phytoplankton near the surface and then descend back down to depth to avoid being seen in the daylight by their predators.  This vertical migration was first discovered by sonar operators in World War II.  While looking for German U-boats, it was observed that the ocean floor itself seemed to “rise up” each night.  After the war, better techniques were developed to sample zooplankton, and scientists realized that the largest animal migration on Earth takes place each night and each morning over the entirety of the ocean basins.


One of my favorite videos on plankton.

The color of water

This far offshore, the water we are traveling through is almost perfectly clear, yet the color of the ocean seems continuously in flux.  Today the sky turned gray and so did the ocean.  As the waves come up, the texture of the ocean thickens and the diversity of reflection and refraction increases.   Look three times in three directions, and you will see three hundred different shades of grey or blue.  If the sun or clouds change slightly, so does the ocean.

The sea is anything but consistent. Rips or streaks of current can periodically be seen separating the ocean into distinct bodies.  So far in our trip, calm afternoons have turned into windy and choppy evenings. Still, the crew tells me that by Gulf of Alaska standards, we are having amazing weather.

Variations in water texture created by currents in the Gulf of Alaska.