(Actually from weather.gov, the program in the bridge is off)

If you enjoy a good seafood steam pot or boil—overflowing with shrimp, crabs, clams and corn and potatoes mixed in, rounded out with fish filets blackened/broiled/fried to your preference—then you have to thank hardworking scientists like Taniya Wallace. Taniya is a fisheries biologist and is the Chief Scientist aboard Oregon II for this leg of the 2018 SEAMAP Summer Groundfish Survey. On top of assessing the health of the Gulf fisheries that feeds Americans across the country, she is busy coordinating the group of scientists that form the research party on the boat. The specifics of the research will follow in upcoming posts, but today, I’d like you to meet a scientist. 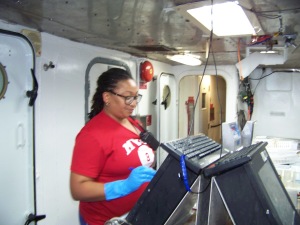 Taniya entering data into the computer.

Taniya was certain of becoming a nurse. Her high school offered vocational coursework in nursing to give students an early start into college degree programs. She was on track, until it came to clinicals. Nursing clinicals are the part of the program where students begin their training in real work settings to apply what is learned in the classroom. More importantly, clinicals introduces students to the realities of the job.

Nurses are among the ranks of hard working, underappreciated sectors of the health field because much of what they do goes unseen. For many in pre-nursing and nursing programs, clinicals ensures that students are experiencing what they are signing up for. For Taniya Wallace, her experience during this class compelled her to make the difficult decision to pursue a different program of study.

Taniya was accepted in Mississippi Valley State University, a historically black university, where she earned her bachelor’s degree in biology with a minor in chemistry. She began a position as a laboratory scientist until the 2010 explosion on the Deepwater Horizon oil drilling rig that caused 11 deaths and the largest oil spill in history. Four million barrels of oil flowed into the Gulf of Mexico over three months before the underwater well was finally capped.

Taniya has always loved the water, and had previously shadowed her cousin who is also a marine scientist. Her aunt builds boats for Austal Shipyard in Alabama and her father works at Ingalls Shipbuilding in Pascagoula, MS, the very company that built Oregon II. With an urgent need to study the critical impacts of crude petroleum oil on the Gulf ecosystems, an opportunity on Oregon II was a natural fit. Taniya signed a three month contract–she’s been here ever since.

What has kept her going for eight years? As a scientist on a ship, she sees “something new every day” on the boat and on land when they stop at different ports. With a love of water, working in a lab at sea is a win-win.

The Teacher at Sea Program emphasizes to applicants that “flexibility and the ability to cope with the uncertain is crucial to the character of those who go to sea.” Taniya Wallace demonstrates this quality by shifting to a research program in college, joining NOAA Ship Oregon II, and by working at sea.

It is no exaggeration that flexibility is a requirement for working on a boat. In fact, I was scheduled to participate in the second leg of the SEAMAP summer groundfish survey on June 21, departing from Galveston, TX on the 22nd. Unfortunately, the trawl winch broke during the first leg (the first time ever for Oregon II which has been sailing for 50 years!), cutting their trip short. To try to make up the time, it was decided that the second leg would get an early start from Mississippi as soon as repairs were completed in Pascagoula, MS.

What originally was a week to get packed, find a plant sitter and cuddle with my cats became a last minute scramble to find rain boots and mow the lawn in the middle of a heat wave—I boarded a plane to Gulfport, MS on June 18 instead. (It was explained that this was not the typical direction in scheduling shifts.) I got to meet some of the fantastic crew members of Oregon II, as well as from neighboring Gordon Gunter, who invited me to play corn hole for the first time. This is the game where you are trying to throw bean bags through a hole cut in a plywood board that’s set on an incline.  I spent the night on the boat in port.

I meet Oregon II for the first time.

The boat bustled the next morning as everyone arrived: crew, scientists and a couple of interns. [Find your internship here! https://coastalscience.noaa.gov/about/internship/  ] At 1400, we were off!

There’s the requisite training and safety information for the ship in general. Taniya took over the interns and me for science brief. I learn that I’m assigned to the day shift which begins at 1200 noon the next day. Night shift starts at 2400 midnight that same day. The operations of the ship are 24 hours. It’s a long wait to get started and I’m looking forward to it.

We spend a night out at sea and I’m up and ready to sort some fish and shrimp. When I get to the galley, I find out that we are in fact, returning to Pascagoula because the trawl winch wasn’t fully repaired.

While issues like this are rare on Oregon II, a vessel that is widely regarded as extremely reliable, the process of science frequently hits stumbling blocks. TV shows like CSI and Bones and movies like Jurassic Park feature futuristic laboratories with state-of-the-art, if wildly impractical, equipment with colorful liquids, holograms, and scientists in lab coats and goggles who complete experiments in mere minutes. In reality, science is a lot messier and SLOWER. While wiling away the time today, I learned about a new hashtag for scientists full of internet examples: #badstockphotosofmyjob.

Real labs tend to have old equipment, space is limited so rooms are often crowded with large machines and many computers, and most liquids are colorless, stored in small, like the size of your pinky, tubes in a refrigerator or freezer. Particularly if you work outside, aka “the field”, and even if you don’t, a lot of equipment might be jerry-rigged from things picked up at Wal-Mart or Home Depot. Not to say that science is unreliable or not credible, but that projects are unique and a lot of times, you have to be creative and build what you specifically need. Then modify it until it works. 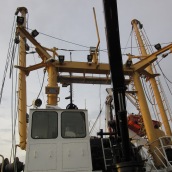 Part of the trawling equipment on Oregon II. 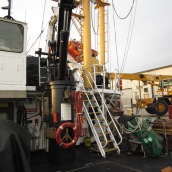 Trawling machinery on the deck of Oregon II

“Deck lab”, Fish from the trawl nets are dumped before moving into the wet lab

So here we are in a typical day of a scientist. A piece of equipment isn’t working, we’re losing data collection by the minute, but remember, we’re going to be flexible.

The National Oceanic and Atmospheric Administration (NOAA) is operated by the U.S. Department of Commerce, which is tasked with promoting job creation and economic growth by providing tools and programs for the scientific collection and analysis of data. NOAA is one of these scientific research agencies employing scientists to study the atmosphere to provide us with weather and climate data, and the oceans, providing information for the operation of fisheries, for example. Good policies are informed by basic research, making the work of these agencies invaluable to the US economy.