Geographic Area of Cruise: Pacific Ocean off the California Coast

After our quick stop into port, we were back to the sorting last night.

Sorting tables ready for the night

I will take you though a step-by-step account of the sort.

An Argonaut – basically an octopus with a shell

A Pyrosome under the microscope. This is really a COLONIAL organism, not truly multicellular.

We arrived in port today, so nothing on the science end to report. As we conducted the trawls the night before, I was still on the night schedule and missed out on a chance to explore San Diego. However, we did go to dinner with the other science personnel that work the daytime shifts, which was nice.

The repairs went well and we returned to the ocean. We arrived at a station just after midnight and worked on 3 trawls. Waves started picking up during the shift. It is supposed to be windy again, which means the waves action will increase too.

Did I mention the winds were going to pick up? Wow. They were right – and tomorrow won’t be any better. I put the patch back on, which is unfortunate because my major side effect is that it really makes me tired. Or it could be that I have a tendency to visit the Flying Bridge to watch the sun come up.

View of sunrise from the Flying Bridge

Tonight we caught adult anchovies – and a lot of them. We ended saving a lot of the catch for other labs and for bait. 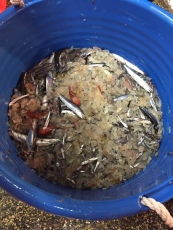 Starting the sort – check out those adult anchovies!

Adult anchovies vs YOY or Young of the Year

At night, the officers piloting the ship keep all the lights off on the bridge. All displays are illuminated with red lights. In this way, the people on the bridge will keep their eyes adjusted to the dark and they will be better prepared to spot potential problems on the water.

At night, bridge displays are illuminated with only red light, which keeps officers’ eyes better adjusted to the dark.