Yesterday, I was in the crew lounge, working on my next blog, when Eric Hoffmayer, Research Fishery Biologist, called me out to the fantail to see a large deceased female blacktip shark (Carcharhinus limbatus) brought in that morning.

If there is a mortality, the science team uses the opportunity to dissect the fish, collecting additional information otherwise unavailable.  When we catch a shark, we release it as quickly as possible. The urgency of getting shark back in the water keeps me from carefully studying its detailed characteristics.

While I understand the loss of this particular shark touches many of us on board, understanding the species better through the loss is a practical, necessary approach to  managing the marine environment.  Without an in depth understanding of sharks, their populations, life cycle, and reproduction, there is no way we can sustainably manage fish populations.  Some may find dissection unappealing, and for those folks you may want to skip this blog, but not without first thanking the biologists who do this work compassionately. They keep our fisheries sustainable.

I rubbed my hand from the head to the tail.  It was smooth. Rubbing from the tail to the head felt just the opposite, rough like sandpaper.  Tiny dermal denticles allow sharks to move quickly through the water, an adaptation so amazing, it was put to use by designers of swimsuits in the Olympics and engineers of Navy ships.

Eric, Adam, and Chrissy, placed the shark on the table.  Eric cut the shark and pulled out a long sack that looked like empty sausage casing. At the end of the casing was a tiny shark pup. Trey joined the crew as they took data on each of the six pups.  The shark was pregnant.

The golden colored egg envelope is still about six times the size of the pup, giving it plenty of room to grow.

Here, Fisheries Biologist Eric Hoffmayer stretches out the egg envelope demonstrating the significant amount of room left for the pup to grow. In the background you can see the egg envelop of another pup stretching across the table.

From the number of pups in a brood, to the possibility of immaculate shark conception, the reproduction of blacktip sharks is of interest to fishery biologists.  Without knowing all about shark reproduction, how many, and where sharks reproduce, we cannot sustainably manage this species, or fisheries in general.

Trey takes me through each stage of reproduction. The blacktip shark is viviparous, like humans. They are born alive, “vivi,” and develop within the mother getting nutrients through a placenta. 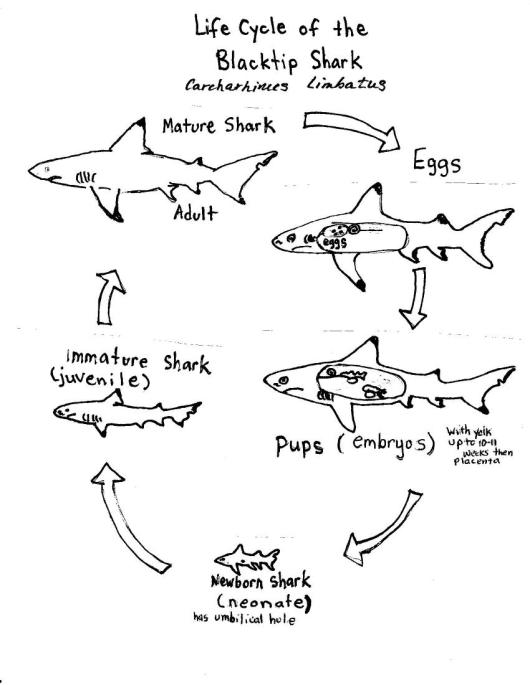 The shark life cycle begins in the female shark’s ovary with an egg.   Trey hands me an ovary that holds the eggs.  It is a large sack of many small red pinpoint size spheres with about 6 larger marble like balls from the high in the body cavity. These eggs wait to mature until the conditions are ideal for reproduction. At that time, the follicle ruptures, and the egg comes out.

I measure the ostium, on the right side of the calipers. 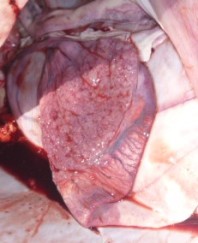 This is one of two ovaries, holding hundreds of follicles.

Shark eggs are fertilized inside the female’s body.  The male fills his siphon sacs with seawater, and then flexes his abdomen to shoot the seawater and semen into the female shark through his clasper. 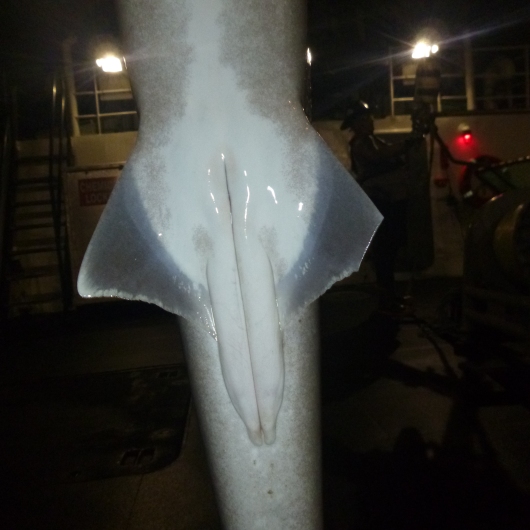 Now I understand why we spin the clasper of a male shark to determine its maturity.  I was able to rotate this male Gulf smoothhound shark (Mustellus sinusmexicanus) clasper 180 degrees and reported it as an adult male.

The male blacktip shark is often ready to mate in April to May but the females are often not ready to reproduce until June or July.  With many sharks, blacktip sharks included, the sperm can remain inside the female until she is ready to reproduce.  When that moment arrives, the egg slips through the ostium, down the anterior oviduct, and into the oviducal gland where it is fertilized by the sperm. For the blacktip shark, usually 4-6 eggs will be fertilized and develop into shark pups.  Females usually reproduce every other year.

Here, I am holding one pup and its yolk with two other pups in their separate egg casing alongside it.

You can see the umbilical cord coming from between the pectoral fins. This pup is in transition, getting less nutrients from the yolk and more from the mother. 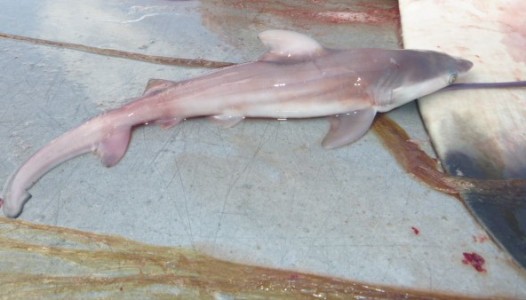 The golden colored egg casing is still about six times the size of the pup, giving it plenty of room to grow. Many features are formed, others still developing.

Note that different sharks have different modes of reproduction.  For example, Cuban dogfish (Squalus cubensis) reproduce through aplacental viviparity or ovoviviparity. The tiny pups you see here nourish themselves with the yolk “ovo” and have no placental connection to their mother.  They are born live “vivi,” and able to feed and protect themselves. Some sharks are oviparous, which means they lay eggs  that hatch later.

Initially,  the blacktip shark embryo uses the nutrients from a yolk sac for about 10-11 weeks. For the remaining time inside the mother, the pup increasingly gets nutrients from the mother through a placenta.  They are viviparous and remain inside the mother for approximately 10 months until they can survive on their own.  I held a pup, still connected to its mother by the umbilical cord. The similarities between human reproduction and blacktip shark reproduction surprised me so much I began to question the classification of viviparous sharks as fish.

I held a pup, still connected to its mother by the umbilical cord.

For approximately two months after it is born, the immature shark has an umbilicus (like a bellybutton) that is still open.  During this phase of the life cycle it is called a neonate, or newborn.  It is otherwise just like a miniature adult blacktip shark.  It can hunt and hide from predators (including its mother).

Individual sharks even within a species mature at different rates, just like humans.  Generally, a male blacktip shark matures between 4-5 years of age, and females between 7-8 years.

This 1385 mm male mature blacktip shark was brought in our second day of the survey.

How does the shark’s life cycle affect fisheries?

Evolutionarily speaking, placental viviparity gave the blacktip shark and others like it an advantage; the shark is born able to survive independently.  But this adaptation has also has a downside:  the females only produce a small brood, unlike other fish that use broadcast fertilization.

During gestation, the female shark we caught most likely migrated to our current location just off the coast of the Mississippi from deeper waters.  Called the Fertile Fisheries Crescent, the Mississippi Sound is one the most productive seafood areas in the nation.  Another risk to this species is pollution and over-fishing in the fragile estuarine habitat, the juvenile shark’s nursery.

There is demand for the high quality blacktip shark meat, the fins, and even the carcasses for fishmeal. The work NOAA Fisheries does to collect information about shark populations over time and over a wide geographic area not only helps keep blacktip shark populations sustainable, it also gives us valuable information about the ocean’s health in general.

Today I reached the half way point in my time on the longline crew.  I finally feel like I am getting into the groove, finding my way around the ship, and meeting people beyond my fishing buddies.  Valerie  McCaskill, Chief Steward, and her cousin, Ava Speights cook amazing seafood, grilled veggies, and au gratin everything. Ava showed me a great piece of exercise equipment, Jacob’s Ladder, to allow me to enjoy the great food guilt free. 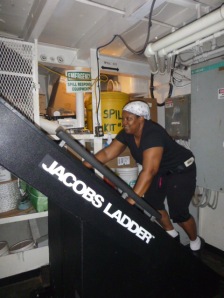 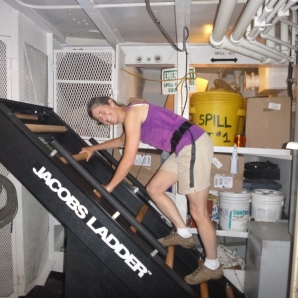 It’s not easy, but helps me justify snack time.

Each station, each day, a new adventure.

2 responses to “Denise Harrington: Spotlight on a Blacktip Shark, September 24, 2016”