Weather Data is not available for this post because I am writing from the Biloxi/Gulfport Airport.

WHAT ARE WE CATCHING?

This is a long-line survey.  That means we go to an assigned GPS point, deploy hi-flyer buoys, add weights to hold the line down, add 100 baited hooks, leave it in place for an hour, and retrieve everything.

As the equipment is pulled in we identify, measure and record everything we catch.  Sometimes, like in the case of a really large, feisty shark that struggles enough to straighten or break a hook or the lines, we try to identify and record the one that got away.  We tag each shark so that it can be identified if it is ever caught again.  We tally each hook as it is deployed and retrieved, and the computer records a GPS position for each retrieval so scientists can form a picture of how the catch was distributed along the section we were fishing.  The target catch for this particular survey was listed as sharks and red snapper.  The reality is that we caught a much wider variety of marine life.

We list our catch in two categories: Bony fish, and Sharks.  The major difference is in the skeletons.  Bony fish have just that: a skeleton made of hard bone like a salmon or halibut.  Sharks, on the other hand, have a cartilaginous skeleton, rigid fins, and 5 to 7 gill openings on each side.  Sharks have multiple rows of sharp teeth arranged around both upper and lower jaws.  Since they have no bones, those teeth are embedded in the gums and are easily dislodged.  This is not a problem because they are easily replaced as well.  There are other wonderful differences that separate sharks from bony fish.

The most common of the bony fish that we caught were Red Groupers (Epinephelus morio), distinguished by of their brownish to red-orange color, large eyes and very large mouths.  Their dorsal fins, especially, have pointed spikes.

We also caught Black Sea Bass (Centropristus striata) which resemble the groupers in that they also have large mouths and prominent eyes.

A third fish that resembles these two is the Speckled Hind (Epinephelus drummondhayi).  It has a broad body, large mouth and undershot jaw giving the face a different look.  Yes, we did catch several Red Snapper (Lutjanus campechanus), although not as many as I expected.  Snappers are a brighter color than the Red Groupers, and have a more triangular shaped head, large mouth and prominent canine teeth.

The most exciting bony fish we caught was barracuda (Sphyraena barracuda).  We caught several of these and each time I was impressed with their sleek shape and very sharp teeth!

Most of the bony fish we caught were in fairly deep water. 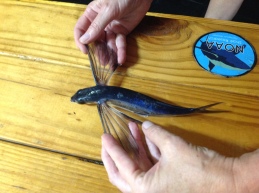 We were fortunate to catch a variety of sharks ranging from fairly small to impressively big!

The most commonly caught were Sandbar Sharks (Carcharhinus plumbeus): large, dark-gray to brown on top and white on the bottom.

Unless you really know your sharks, it is difficult for the amateur to distinguish between some of the various types.  Experts look at color, nose shape, fin shape and placement, and distinguishing characteristics like the hammer-shaped head of the Great Hammerhead (Sphyrna mokarran) and Scalloped Hammerhead (Sphyrna lewini) sharks that were caught on this trip.

The beautifully patterned coloring of the Tiger Shark (Galeocerdo cuvier) is fairly easy to recognize and so is the yellowish cast to the sides of the Lemon Shark (Negaprion brevirostris).

Several of the sharks we caught were large, very close to 3 meters long, very heavy and very strong!  Small sharks and bony fish were brought aboard on the hooks to be measured against a scaled board on the deck then weighed by holding them up on a spring scale before tagging and releasing them.  Any shark larger than about 1.5 meters was usually heavy and strong enough that it was guided into a net cradle that was lifted by crane to deck level where it could be measured, weighed and tagged with the least possibility of harm to either the shark or the crew members.  Large powerful sharks do not feel the force of gravity when in the water, but once out of it, the power of their weight works against them so getting them back into the water quickly is important.  Large powerful sharks are also pretty upset about being caught and use their strength to thrash around trying to escape.  The power in a swat from a shark tail or the abrasion from their rough skin can be painful and unpleasant for those handling them.

I am standing alone on the well deck; my head is buzzing with the melodies of the Eagles and England Dan.  A warm breeze brushes over me as I tune out the hum of the ship’s engines and focus on the rhythm of the bow waves rushing past below me.  It is dark! Dark enough and clear enough that I can see stars above me from horizon to horizon: the soft cloudy glow of the Milky Way, the distinctive patterns of familiar favorites like the Big Dipper and the Little Dipper with its signature bright point, the North Star.  Cassiopeia appears as a huge “W” and even the tiny cluster of the “Seven Sisters” is distinct in the black bowl of the night sky over the Gulf of Mexico.  The longer I look the more stars I see.

This is one of the first really cloudless nights of this cruise so far.  Mike Conway, a member of the deck crew came looking for me to be sure I didn’t miss out on an opportunity to witness this amazingly beautiful show.  As I first exited the dry lab and stumbled toward the bow all I could pick out were three faint stars in the bowl of the Big Dipper.  The longer I looked, the more my eyes grew accustomed to the dark, and the more spectacular the show became.  Soon there were too many stars for me to pick out any but the most familiar constellations.

As a child I spent many summer nighttime hours on a blanket in our yard as my father patiently guided my eyes toward constellation after constellation, telling me the myths that explained each one. Many years have passed since then.  I have gotten busy seeing other sights and hearing other stories.  I had not thought about those long ago summer nights for many years.  Tonight, looking up in wonder, I felt very close to Pop again and to those great times we shared.