The Thomas Jefferson is in port at the naval base at Newport so the small launch boats are being used for hydrographic survey training.

On my two trips out, I have absorbed an enormous amount of information about how to set up all the computer equipment so each part “talks” to the other, how to know if the underwater multi-beam sonar is set correctly, how to lengthen or shorten the swath of the beams so the “pings” travel the correct distance/speed and how to examine the survey data and discuss what is seen (for example, is that disturbance we see the wake from a passing ship? Are we running the lines too close to the jetty? Is that an underwater cable? Do you see that large school of fish moving?).

Doug Wood, a senior hydrographic survey technician, explained how to start the generator on the launch, turn on all the surveying and charting technology and created different scenarios so that we could set various lines to survey. Once we had our location, the Coxswain (the person in charge of steering and navigating the boat) could guide the launch along that line and we could begin logging data. As the sonar began delivering data to the screen, we were able to see rocks, buoys and even large fish that appeared along with their shadows. The multi-beam sonar was capable of picking up lots of information about what was on the sea floor.

If you are interested in finding out more about how NOAA maps with sound, take a look at this article by clicking on this link: 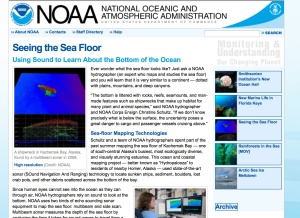 Look at how detailed NOAA’s nautical charts must be:

One of the most interesting parts of being on the Thomas Jefferson has been having conversations with everyone onboard. It seems that every officer, engineer, seaman or steward has a remarkable story about the path that brought him or her to serve on NOAA’s TJ.

Yesterday, I had a chance to ask three Junior Officers and a Lieutenant J.G. some questions about their work. Ensign Katie Seberger, Ensign Marybeth Head and Ensign Max Andersen were kind enough to let me chat with them as they worked in the chartroom updating checklists and working to improve safety routines. LTJG Matthew Forrest took a minute to talk with me in the mess. When I asked what the best thing about their job was, each answered that they really enjoyed their work.

Ensign Seberger explained that she had loved the ocean and wanted to study marine science her whole life and the best part of her job is being out on the water. Ensign Head said that doing something for the big picture is the best and it is easy to get really excited about her work. Ensign Andersen said the best part of his job has been getting a chance work with the Z boats; the newest surveying tool the crew of the TJ will begin using soon. LT.JG Forrest said that it was the opportunity to be a part of something much bigger than you, and contribute every day to something important. He also said an enjoyable part of his job is working with a great team.

Each of the officers had to think about what the worst part of their job was. Ensign Seberger said that while it is exciting to travel, it is sometimes hard not knowing where you are going next. Ensign Head said that for her, it is difficult to be disconnected from the water, and that even though she is sailing on a ship, she grew up on small boats with the salt spray on her face, and she misses that. Ensign Andersen said the worst thing is the uncertainty of the ship’s schedule and not knowing where you will be next. LTJG Forrest said the worst thing is the lack of sleep because it is not unusual for them to be up working for 16 hours sometimes. He also said it was hard to be so far from his family and disconnected from everything going on at home.

Each of the officers had great advice for young students who would like to one day do the type of work they do. Ensign Seberger suggested that its important to volunteer doing what you think you would like to work at so you can find out if it is for you. Ensign Head’s advice to students was to be “persistent and memorable.” She explained that you need to keep at whatever you are doing and not give up. The people that quit will be forgotten. The people that keep working will not. Ensign Andersen’s advice to young students is to make your own path and don’t settle for the status quo. He thinks you might have to work harder to make your way, but it’s worth it. LTJG Forrest felt that kids should understand that all the work done on the Thomas Jefferson is built on a foundation of the fundamentals of math and science so all kids should try to soak up as much math and science as they can. He also said to always be ready to work hard.

Each of the officers said they enjoy their work very much and could not imagine doing anything else!

In my last blog entry the Question of the Day was:

Why is surveying the ocean floor so important?

The ocean floor is covered with all sorts of things including natural things, like rocks, reefs, hills and valleys, and manmade objects, such as cables, docks, shipwrecks and debris. If ships don’t know where things are it can be very dangerous. Storms often change the position of things underwater so it is very important that charts are accurate and updated. Hydrographers capture the data from the seafloor using sonar, process the data and utilize the information to create precise and informative ocean charts.

In my last entry, The Picture of the Day showed an anchor ball. An anchor ball is a round, black shape that is hoisted in the forepart of a vessel to show that it is anchored. It must be taken down when the ship is underway.

Today’s Question of the Day is:

How was the ocean floor mapped before sonar was invented?

Today’s Picture of the Day: What is Ensign Gleichauf lowering into the water?

Thanks for reading this entry!