Mission: Northern Right Whale Survey
Geographical are of the cruise: Atlantic Ocean out of Woods Hole. MA
Date: May 15, 2012

Winds out of the south about 10-15 knots. Partly cloudy with mid-level clouds.

We left Woods Hole, MA, yesterday afternoon around 2:00PM. All night we traveled until we reached Georges Bank this morning. George’s Bank is a rich feeding area that many cetaceans utilize especially those that eat small crustaceans called copepods. On May 12th a previous right whale survey located a group of 15 right whales. We headed out to that point. We started our watch sessions at 7AM and rotated through three stations.

One person used a mounted binocular which has 25X125 magnification. It is called “Big Eye.” Big Eye is used to scan the horizon from the bow to the port side. It is also used to help identify a whale when it is seen by someone else. The second person has binoculars and looks on the starboard side and the third person records information when any whale is seen and watches for the whales closest to the ship.

I learned a lot today about identifying whales. First off, if helps if you know what species you might be dealing with. In this location, the main species one might see are right whales, fin whales, sei whales and humpback whales.

So, here is the scoop on whale identification. Typically the first thing you see that indicates a whale is present is the spout. Whales are mammals and have lungs. Therefore, they need to inhale and exhale air. Whales have evolved to have their nostrils on their back, called “blowholes.” Baleen whales have two blowholes. The spout that you see is exhaled moist air.

Anyway, back to identifying whales. Whales have somewhat different spray patterns giving an indication of the type of whale. Right whales and humpbacks have v-shaped blows, if you see them head on, or they look like puffy clouds from the side. Sei whales and fin whales have tall columnar spouts.

The second indication is to look for a dorsal fin, a fin on the whale’s backside. Right whales don’t have dorsal fins, but the other three whales do. You can also tell the difference between a sei and a fin whale by how close the spout and the dorsal fin appear. If you see the fin about the same time as the spout, you have a sei whale and if you don’t see the dorsal fin for a while you have a fin whale. (slow to the finish – fin whale, seys I’m here – sei whale. Method of memorizing – compliments of me!)

A third thing to look for is the fluke. Some whales, such as the right and humpback whales, raise their flukes when they dive down into the water. The humpbacks fluke is very broad and more horizontal, whereas the right whales fluke is more upright. In addition, the right whale fluke is more smooth on the inner portion of the fluke and the humpbacks is jagged.  Humpbacks also have white patterns on the back of their fluke, which is used to identify them whereas, right whales are just dark. So when you are looking for right whales it is exciting when you see a more rigid, dark colored fluke go down.

Now there is one more thing to look for in a right whale. Right whales often skim along the surface. They open their mouths and let the water run through hoping to catch small crustaceans with their baleen. This gives them a characteristic sloping shape where their head is up higher in the water.

They also have callosities which are used to identify individuals. Callosities are rough patches of skin and each right whale has a different pattern of this skin.

At the location of the previous 15 whales we found 5 right whales. A small boat was lowered into the water in order to get closer to the whales. While whales are identified up in the flying tower of the Delaware II, the mission of this research cruise, however, is not just to identify whales. It is important to individually identify each right whale. Therefore, when right whales are seen, the biologists need to determine if it is one that has already been identified. To this purpose they take pictures of the whales head, remember that’s where the callosities are located. If it turns out to be a whale that scientists haven’t identified, or a new calf, a biopsy is taken of the whale (more to come on this). The biologists took pictures of the right whales, but it was very difficult to get close, as they were feeding below the surface and staying down for long periods of time. Right whales may remain below the surface for up to twenty minutes.

The gray boat heading out to get closer to right whales

After the time it took chasing the 5 whales, we made our way to a previous sighting of nine right whales. We saw 6 whales on the way and tagged the locations, but did not lower the boat. Our time was cut short because the weather is supposed to turn for the worse this evening and we need to get back near land. Therefore, we are heading back to the cape tonight, near Provincetown, as the weather forecast calls for rain, high winds and rough seas. We may be staying closer to land the next day or so.

I arrived in Woods Hole, MA, Sunday evening and made my way to the Delaware II. When I came on board I was told that this may be the Delaware’s last NOAA research trip. It was first deployed in 1968 by the Bureau of Commercial Fisheries. The Bureau was reorganized when NOAA was formed in 1972.  The Delaware II is the smallest ship in the NOAA fleet. Doesn’t seem to small to me. In June, the Delaware II will be taken down to the Marine Operations Center – Atlantic in Norfolk for layup. Hopefully it will end up with some other organization, such as a university, and sail the seas again.

I know many of you are probably curious as to where I am staying on board the ship. Check this out! 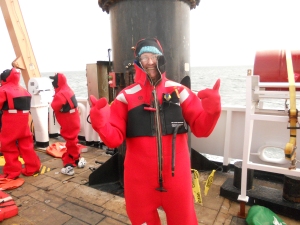 Me with my emergency suit on!

Safety is very important aboard a ship. When the Delaware took off from port we had two important drills to go through. The first was in case of a fire and the second was in case we would need to abandon ship. We all bring survival suits to the back of the ship and need to try them on to make sure we can get them on ourselves. This could be the difference between life and death.

I also have had to learn a new language while aboard the Delaware. Some words I knew and some I didn’t. Lucky for me my Dad drilled me on many nautical words back in the time when we had a small family sailboat. I can remember sitting around the kitchen table being asked to give the definitions. So lets see how you do. How many do you know? Write me back and let me know how many of the words you knew. Be honest! Also let me know if you have any other questions.

Can you think of others?