With the last dive of the cruise over, the group has completed 175 dives, which equates to 7.5 days underwater! Most of the planned coral reef sites have been surveyed even with our lack of a third small boat. The weather has stayed relatively calm and has been surprisingly supportive of our cruise. The mad rush is now to input all the remaining data before we disembark the ship later today.

An area that I have only briefly referred to in previous logs, are the types of coral diseases present and being studied. Chief Scientist, Scott Donahue, commented to me that there has been a trend over the last decade of decreasing coral coverage. This is believed to be related to anthropogenic stresses such as water quality and climate change. By comparing spatial and temporal patterns against trends in coral reef disease, over different geographic regions and reef types, it is hoped that a greater understanding of how these patterns are related to different environmental conditions. The team was specifically looking at ten disease conditions affecting 16 species of Scleractinian corals and Gorgonian sea fans. Although I tried to identify some of the diseases, it was actually quite difficult to distinguish between individual diseases and also other causes of coral mortality.

Black-band Disease is a crescent shaped or circular band of blackish material that separates living material from white exposed skeleton. It is caused by a cyanobacteria in combination with a sulfide oxidizing bacteria and a sulfur reducing bacteria. White-band Disease displays a margin of white tissue decay. It can start at the base of a colony or in the middle. It affects branching corals and its cause is currently unknown. Corals have a pretty tough time living out in the ocean and have many problems to overcome. If its not a boat’s anchor crushing it could be any number of the following; a parrot fish (predator) eating it; deterioration of the water quality; a hurricane; an increase in major competitors like algae or tunicates, and to nicely top it all, it can always get a disease too!

Most of the scientists on the Nancy Foster are volunteers, giving up their own free time to be part of the trip. Kathy Morrow is a Ph.D. student who has extensively studied the ecology of cnidarians for the past 9 years. She is currently researching her dissertation on the community structure and stability of coral-algal-microbial associations based on studies conducted off the coast of Summerland Key, Florida and St. Thomas, U.S. Virgin Islands. On one of the last dives of the trip Kathy takes time to collect mucus samples (she refers to this fondly as coral “snot”), from a site she has previously visited numerous times over the last few years. The objective is to collect mucus samples so that they can be studied later for their bacteria composition. 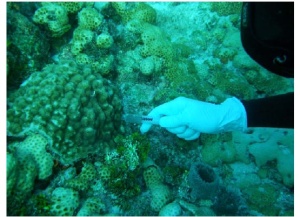 Once Kathy has collected these samples she must process them so that they can be stored until she has the opportunity back in the lab, to analyze them. Although I was not present when Kathy was collecting the samples, I did help her in the wet lab with the final stages of storing her collection of samples. Having collected multiple mucus samples from each of the preselected coral species in syringes, the samples were then placed into a centrifuge to extract the bacteria present. This material is denser, so sinks to the bottom ad forms a darker colored pellet. My job is then to remove the excess liquid, but preserve the bacteria pellet so that it can be frozen and stored for later analysis. Back in the lab at Auburn University, Kathy will chemically breakdown the bacteria to release their DNA. This DNA is then replicated and amplified allowing for Kathy to perform analysis on the bacteria to identify the types present in the corals. Kathy will spend the next year studying these bacteria samples and many more she has collected. 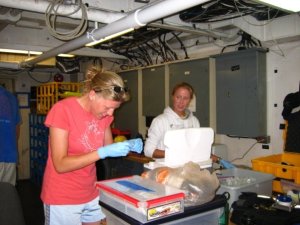 So here we are back in port after an amazing time on the Nancy Foster. I was initially concerned about being out at sea with people I did not know, studying an area of science I really knew very little about, in an environment I knew would probably make me sick, but didn’t thank goodness! But everything turned out to be a thousand times better than I could have imagined. I have had seen so much and learnt an amazing amount that my head is spinning with all the ideas I have to use with my classes back at school. Yet, there are things that I just rang out of time to look more closely at and part of me wishes we had been out at sea longer. My second time as a Teacher At Sea, has left me with some wonderful memories of the most professional and dedicated scientists and crew you could wish for, but also of how amazing corals are and how much we still have to learn. Thank you everyone who was involved in making this a truly remarkable and memorable experience.

The 2009 coral research team and Teacher At Sea, Clare Wagstaff on board the Nancy Foster