One of the RAINIER’s boat launches going off on a beautiful day in SE Alaska.

Today I was invited to ride along to Sitka to pick up four crew members and the mail.  The day was beautiful and the boat ride was terrific.  Sitka has been a part of Alaskan history for a long time. The Russians were the 1st Europeans to settle at Sitka.  It was also where Russia turned over Alaska to the U.S. after the purchase by Secretary of State Seward. It was an early capital of Alaska before moving to Juneau. The harbor and city were spectacular, off in the distant background was Mt. Edgecumbe.

Three of the crew we picked up will be returning to the RAINIER after leave. The other passenger has just finished NOAA Corps officer basic training and will be boarding the RAINIER for the first time.  ENS Tim Smith will begin his career with NOAA aboard the RAINIER. Tim is a native of Rhode Island.

Today was a spectacular day in SE Alaska full of warm sunshine, calm winds, and calm water. Later in the day it began to cloud up but the winds remained calm.  On the way to Sitka I was able to observe dozens of sea otter, a sea lion, and a porpoise.  Sitka looks like a picturesque town and popular tourist location for large cruise ships.  There was a large cruise ship in the bay when we arrived.  The surrounding mountains and the backdrop of Mt. Edgecumbe makes for beautiful landscape photos.

Questions of the Day 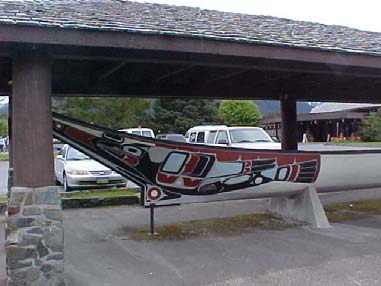 After a dip at the Hot Springs, back to the RAINIER paddling a kayak in calm waters.