While aboard the NOAA Ship Oregon II, I was able to create some art, which is my absolute passion in life. I was able use my time before and after most shifts to draw and paint the fish and sharks with watercolor paint and water from the ocean. It was tricky to paint with the constant movement of the ship, but I was able to paint over 20 paintings of sharks, fish, and the Oregon II over the 16 days on board the ship. 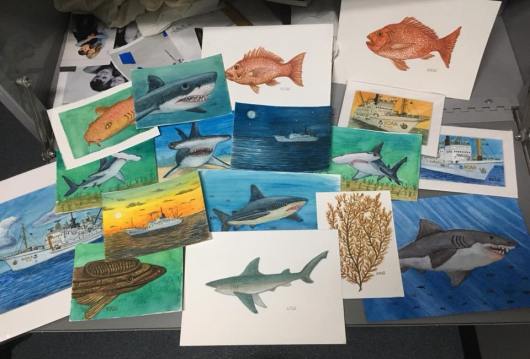 Now that I’ve been home for a month, I’ve had some time to reflect on my NOAA Teacher at Sea experience. If I told you my NOAA Teacher At Sea experience was incredible, I would be understating it quite a bit. I knew the excitement of working on the mighty NOAA Ship Oregon II and participating in the shark survey would be a highlight of my lifetime for sure. The opportunity to work with NOAA scientists, fishermen, and the rest of the crew was the best learning experience a teacher and artist could ask for. But just a week after returning, it was back to school and I needed to find ways to convey what I learned to my students. I began by creating a digital infographic about Longline Fishing so they would have a visual to go along with my explanation.

I wanted to inform my students to create awareness about the species of shark and other ocean inhabitants that are threatened and endangered. I also wanted them to learn science about the animals and incorporate some of that data into their art to make their images more impactful to those that see them. We want to compile related projects together until later in the year for our annual Night of the Arts- NOAA Edition. 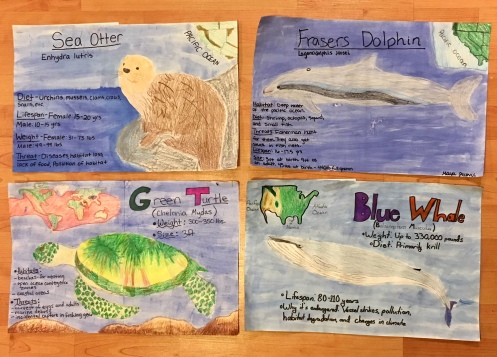 We also created three life size Art Shark paintings and posted them in the hallways of our school to advocate for sharks through art and work to give sharks a more positive community image, and not the sensational, fearful media portrayal of sharks. 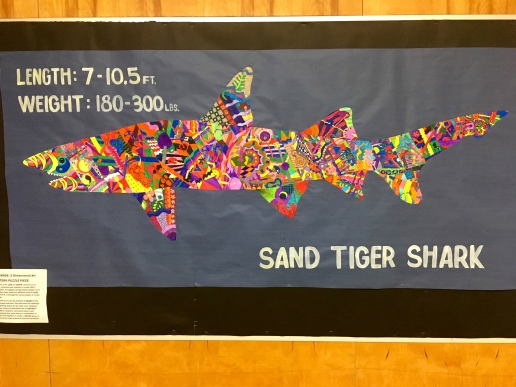 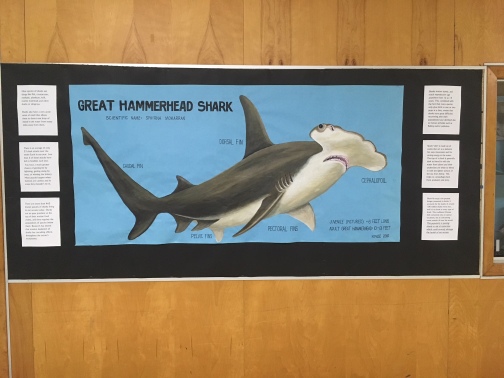 As a fine artist painter, the Teacher At Sea experience has helped to make my artwork much more accurate for several reasons. Primarily the reason was proximity. I was able to see the sharks and fish first hand everyday, and take many reference photos of our catch each day. I could now see the beautiful colors of different sharks while out of the water, which I never had seen before. I was also able to speak to the fishermen and scientists each day about the behaviors and biology of the fish and I gained insight from listening to their vast experiences in the oceans all around the globe.

Since being home, I’ve begun to paint a series of scientifically accurate side views of my favorite sharks, and eventually I will digitally compile them into one poster after I get 15 to 18 completed. After that, I’ll begin a series of paintings with sharks swimming in their natural environment to bring more color and visual dynamics onto the canvas. This has been the most inspiring adventure of my life, and I will continue to advocate for my favorite ocean animals by using art to bring the respect and admiration that these beautiful sharks deserve to continue to thrive long into Earth’s distant future.