CLICKING ON THE SMALL PHOTOS WILL ENLARGE THEM & REVEAL HIDDEN TEXT.

We did not have great success with the shrimp bait.  Guess these fish prefer their shrimp au naturel where as we gave them cooked, peeled and deveined shrimp.  This morning we set out again in the small boats so the divers could re-bait the traps with squid instead.

Look up the word coxswain if you don’t know what it means. Here we pronounce it “COXS-UN”. Before each dive, we run through a safety assessment, called the GAR (shown here by Nick) It stands for Green, Amber, Red. We rank the following categories and if our numbers are low enough to fall into the Green category, divers are allowed to dive: Supervision, Planning, Crew Selection, Crew Fitness, Environment, Event Complexity. If we come up with an Amber, we know we need to dive with caution and Red means we won’t be diving that launch. The Commanding Officer (CO) has the ultimate authority to say if divers go out or not.

This was left over from the last science trip and we were glad to have it since our shrimp didn’t lure the fish into our traps.

FWC diver. Taken with my underwater camera from the small boat.

Finally Ariel looks much more like a scientist now that she has a pen in her pocket!

Safety on the ship

Safety always comes first on the Nancy Foster.  We have had briefings on safety, we wear hard hats while the cranes are moving, we wear closed toe shoes (except when in the shower) and we have had fire drills & first aid emergency drills.  Today we had an abandon ship drill.  First we each arrived at our muster stations (our assigned place to meet), then we climbed into our Survival Suits (nicknamed the Gumby suit.)  This is made of very thick neoprene, probably 7-9 millimeters thick, and covers you from head to toe to fingertips.  It is meant to keep you safe from hypothermia if you were overboard for a long period of time.

Getting into this full body, super heavy neoprene suit is a real chore! I discovered the best way is to jump up and down. Photo by ENS Conor Magnin

It is confirmed. I am not as tall as the average adult. This suit hangs so low that I look like I am kneeling down. Oh well, I would most certainly still be warm in open seas. Photo by ENS Conor Magnin

This is Gumby. Can you see the resemblance? Photo credit: Stock Photo

After wriggling back out, we went to find our assigned life raft.  There are 6 rafts which each hold 25 people.  There is enough bunk space on the ship for 37 people, so there are plenty of life rafts for all.  Three rafts sit on each side of the ship so even if the ship was under water listing to one side, we could still access enough rafts for all.

Inside this capsule is the life raft. It opens upon hitting the water and has a cool tent for shade. Still, I prefer the Nancy Foster and have full faith in our crew to keep her upright.

In addition to the Survival Suit, Nick thought he would be safer being more visible so he wore a few extra items to ensure his safety! 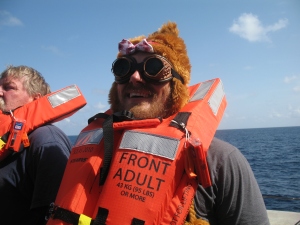 Nick has a horde of awesome hats. Keep your eyes peeled for more.

Dancing with the Remotely Operated Vehicle

Lance Horn and Jason White are geniuses with the Remotely Operated Vehicle. There are lots of very highly technical parts to this equipment and they do it all – and they do it well.

I will be sharing lots more information about the ROV in an upcoming post.  Today I wanted you to see who else besides scientists are curious about the ROV (the large instrument with the yellow top you see in the video here)

We checked traps again this morning and had success with the squid.  The dive teams will perform surgery today!  The surgery only takes about 10 minutes, which may seem quick, but since they are underwater at a depth of about 100 feet, they must work quickly so as to not run out of their air supply.  One scientist (usually Paul Barbera, FWC Associate Scientist – who they call the Fish Whisperer) will hold the fish steady while another will make the incision, insert the acoustic transmitter and then stitch up the incision. The stitches will dissolve in about a week or two.  The acoustic transmitter (fish tag) will last 2-5 years.  Life span of the tag is determined by it’s battery life.  The smaller tags (for smaller fish) can last 2 years and the larger tags (for larger fish) will work for about 5 years.  This allows the scientists to gather information on the same fish for multiple years, giving them a really good idea of their seasonality – or the fish’s movements between different areas, both protected an unprotected.

Acoustic Transmitters – Fish Tags which will be surgically placed in the fish at a depth of about 100 feet. Here you can see the smaller ones are about 4 cm and the larger 6.5 cm

Placing the fish tag is just one part of the process of collecting the data the scientists are hoping to gather.  The second part is to place an instrument which can read the acoustic transmitter as it swims past (within the fish of course!)  Danielle Morley, FWC Assistant Research Scientist, and I worked to prepare some previously used acoustic receivers.  Each of the 90 receivers the FWC have placed in the waters off the Florida Keys costs about $2500.  Therefore, used receivers are reprogrammed, repainted with anti-fouling paint and used again.  Anti-fouling paint makes it very difficult for animals like barnacles to build their calcium carbonate skeletons on the receiver’s exposed top.  The receivers are made up of a hydrophone, a circuit board and a battery.  I replaced the batteries and cleaned up the O rings.  The O rings are extremely important as they ensure the capsule is completely water-proof and can be submerged in ocean water for a year at a time.

Here I am cleaning and lubricating the O rings to ensure a water-tight seal. I tried really hard to find at least one photo of me without a HUGE grin on my face so you can see that we truly are serious about science around here (we are just having a REALLY good time doing it!) Photo by Danielle Morley.

These are the receiver stands, which are allowed under a special permit from the Florida Keys National Marine Sanctuary, will sit on the ocean floor. They have a concrete block on the bottom to weigh them down and then a series of PVC pipes to hold the receiver. If you are wondering why these are sitting on dry land, I snapped this shot during my tour of Scott’s office before we left for sea.

After a year, the batteries need replaced and the data needs retrieved.  Today, the divers will retrieve 6 acoustic receivers on Riley’s Hump and replace them with those we reprogrammed.  This is footage of our divers (Jeff, Sean and Colin) making the swap.  Thanks to Cammy Clark, the Miami Herald reporter, who dived down about 100 feet to capture the action.

Over the last 5 days, there have been 65 dives and 3 surgeries performed.  The scientists deem this as very successful trip.  Additionally, all divers returned safely to the ship after each dive!  This morning the divers are retrieving the traps, which like the receiver stands are allowed by a special permit from the FKNMS.  Even if conditions did not allow us to get the traps and they needed to stay at the bottom, no fish would be caught for very long.  Each trap is closed with a zinc clip that will dissolve after a week or two.

Zinc clips keep the traps closed, but only temporarily. They dissolve after a week or two allowing any fish to escape if a trap has to be abandoned due to weather or other conditions.

The large fish we are trapping can easily stay down in a trap that long.  But today, the weather allowed us to retrieve the traps.

Along with the traps, Ben and Ariel brought five Lion Fish Pterois volitans back up.

I was told that if I held the fish way out in front of my body, it would look bigger – but since this was a whopping 42 cm, I didn’t need to hold it out far to make it look large. Photo credit: Florida Fish and Wildlife Conservation Commission

Notice the large, wide mouth. This is a voracious predator which is part of the problem with them moving in to the area. Photo by Amy Orchard

Lion Fish are not naturally found here.  They are native to the Indo-Pacific.  It has not been determined exactly how they got to the area but they are very popular for home aquariums.  However, since they are voracious predators, after eating all their other aquarium fish, people have been dumping them in the Atlantic Ocean for decades.  It was decided that efforts to eradicate the species would be futile since they are prolific breeders, have no natural predators and have been found in extremely deep waters where it would be unfeasible to reach them.  Instead, there are large efforts to manage their populations in certain areas.

All these teeth are not used for chewing. A Lion Fish swallows it’s prey whole. It uses a striking method to capture its prey, but these teeth help to hold it in once it is caught.

I found out they are SUPER tasty!  Especially since Bob Burroughs, 2nd Cook and Lito LLena, Chief Steward prepared them as ceviche – my favorite.

I have been eating SO WELL! Usually when there is a large group eating together, the cooks cringe when the vegetarians come by, but Bob & Lito are always happy to see me and have made me some DELICIOUS dishes. Thanks Bob & Lito!

In the afternoon we got a special treat.  We left the waters of the Florida Keys National Marine Sanctuary and ferried over to Fort Jefferson at the Dry Tortugas National Park for a tour and some snorkeling.  One can only reach the fort by boat or sea plane.  It was built between the years 1846 and 1875 as a way to claim the main shipping channel between the Gulf of Mexico, the western Caribbean and the Atlantic Ocean.  It never saw battle, mostly because it’s fire power was so massive that no one wanted to go up against it!

This huge cannon was on the top tier of the fort and was one of many that protected the fort.. It was brought up by man power. Quite a feat. You can see that it was able to rotate 360 degrees in order to protect the fort from ships coming in any direction.

Lots of restoration work is being done to bring it back to its original state.

Even though I have been able to travel out into the open ocean on the small boats each day, it was SO GOOD to actually get into the water and snorkel around.  So many amazing things to see and take photos of.

There were many jelly fish (mostly Moon Jellies) and we all got stung a lot, but the underwater scenery was well worth it.

Bonus Points – make a COMMENT and tell me how the LION FISH and the GILA MONSTER are similar!

Answer to my last post:  It was a DOLPHIN.  The Common Bottlenose Tursiops truncatus

Also, the definition of RECIPROCITY is the practice of exchanging things with others for mutual benefit.

I have been so impressed with the seamless collaboration between the crew & science team as well as the different agencies within the science team.  Everyone gives of themselves so freely for the main goal of the scientific mission.