Finally, as we near the end of the cruise, I’m ready to write about one of the major parts of the survey we are doing.  Until now, I’ve been trying to take it all in and learn about the science behind our surveys and observe the variety of organisms that we have been catching. In my last few entries, I explained the bongo net tow that we do at each station.  Immediately after we finish pulling in the bongo nets and preparing the samples, the boat repositions on the station and we begin a tow using an anchovy net.  It gets its name from the size of fish it is intended to capture, but it is not limited to catching anchovies and as you will see in the entry below, we catch much more than fish.

Why are we collecting juvenile pollock?

We are interested in measuring the abundance of juvenile pollock off of East Kodiak Island and in the Semidi Bank vicinity.  We are not only focusing on the walleye pollock, we are also interested in the community structure and biomass of organisms that live with the pollock.  Other species that we are measuring include: capelin, eulachon, Pacific cod, arrowtooth flounder, sablefish, and rockfish.  As I described in the bongo entries, we catch zooplankton because those are prey for the juvenile pollock.

The Gulf of Alaska juvenile walleye pollock study used to be conducted every year, using the same survey grid.  Now the Gulf of Alaska survey is conducted every other year with the Bering Sea surveyed in alternating years.  That way, scientists can understand how abundant the fish are and where they are located within the grid or study area.  With the data being collected every year (or every other year), scientists can establish a time series and are able to track changes in the population from year to year. The number of age 0 pollock that survive the winter ( to become age 1) are a good indicator of how many fish will be available for commercial fisheries. NOAA’s National Marine Fisheries Service (NMFS) will provide this data to the fisheries industry so that fishermen can predict how many fish will be available in years to come.  The abundance of age one pollock is a good estimate of fish that will survive and be available to be caught by fishermen later, when they reach age 3 and beyond, and can be legally fished.

The other part of our study concerns how the community as a whole responds to changes in the ecosystem (from climate, fishing, etc.).  That is why we also measure and record the zooplankton, jellyfish, shrimp, squids, and other fish that we catch.

How does it work?

The anchovy net (this particular design is also called a Stauffer trawl) is pretty small compared to those that are used by commercial fishermen.  The mesh is 5 millimeters compared to the 500 micrometer mesh that we used for the bongo.  The smallest organisms we get in the anchovy net are typically krill.

Typically, we don’t catch large fish in the net, but there have been some exceptions.  You might wonder why larger fish do not get caught in the net. It’s because the mesh is smaller and it’s towed through the water very slowly.  Fish have a lateral line system where they can feel a change in pressure in the water.  The bow wave from the boat creates a large pressure differential that the fish can detect.  Larger fish are usually fast enough to avoid the net as it moves through the water, but small fish can’t get out of the way in time.  One night we caught several Pacific Ocean Perch, which are larger fish, but very slow moving.  They are equipped with large spines on their fins and are better adapted to hunkering down and defending themselves as opposed to other fish that are fast swimmers and great at maneuvering.

When we pull in the trawl net, it is emptied into buckets and then the haul is sorted by species and age class.  The catch is then measured, weighed, and recorded on a data sheet.  After that, we return most of the fish to the sea and save 25 of the juvenile pollock, capelin, and eulachon to take back to Seattle for further investigation.  We also save some of the smaller flatfish and sablefish to send back to Seattle. Check out the gallery below to see the process from beginning to end.

Where are the pollock in the food web?

Eulachon and capelin are zooplanktivores and compete with the juvenile pollock for food. Larger eulachon and capelin are not competitors (those over 150 mm).  Arrowtooth flounder and Pacific Cod are predators of the juvenile walleye pollock.  Cyanea and Chrysaora jellyfish are also zooplanktivores and could potentially compete with juvenile walleye pollock, so that is why we focus on these particular jellyfish in our study. 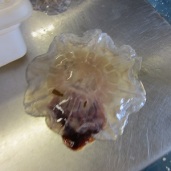 One of the most common jellies that we see, Cyanea or Lion’s Mane Jelly.

What’s in that net?

When we pull in the trawl, we sort it into piles of different species and different age classes.  If we get a lot of juvenile pollock (age 0), we measure and weigh 100 and freeze 25 to take back to the lab so their stomach contents can be examined.  We do the same procedure for young capelin, eulachon, and flatfish.  Other organisms like jellyfish are counted and weighed and put back in the ocean.

Below is a list of different organisms we have found in the anchovy net during this cruise:

Every once in a while we find Pacific Cod juveniles, which look very similar to juvenile pollock.

A pink salmon that made its way into our net.

Sometimes all we catch in the net are jellies!

The top two arrowhead flounders are facing up and the bottom one is upside down. Notice the color variation. In flounders, both of the eyes have migrated to the top of the head.

A small pile of krill that was in our anchovy net.

These are the larval stage of a fish belonging to the family Osmeridae. They are likely Capelin or Eulachon.

Here I am holding a large arrowtooth flounder that was in our trawl.

The sharp teeth of an arrowtooth flounder.

The top fish is a Eulachon, the next is a Capelin, followed by a larval osmerid (could be a Capelin) and lastly, an age zero pollock.

As we wind down the cruise, I’m feeling a little sad that it’s ending.  I’m looking forward to going home and seeing my husband and our dog, but I’ll miss the friends I’ve made on the ship and I’ll certainly miss collecting data.  Even though it can be quite repetitive after awhile, I can’t think of a more beautiful place to do this work than the Gulf of Alaska.  The last few days we have had a couple of stations near the coastline around Seward, Alaska and we have ventured into both Harris Bay and Resurrection Bay.  There we caught sight of some amazing glaciers and small islands.  There was even an island that had bunkers from WWII on it.  Yesterday, 3 Dall’s Porpoises played in our bow wake as I stood on the bridge and watched.  It’s moments like this that all of the discomforts of being at sea fall away and I can reflect on what an incredible experience this has been!

Spiny lumpsuckers are tiny, cute, almost spherical fish that have a suction disk on their ventral (bottom) side.  The suction disk is actually a modified pelvic fin.  They use the suction disk to stick to kelp or rocks on the bottom of the ocean.

Their family name is Cyclopteridae (like the word Cyclops!).  It is Greek in origin.  “Kyklos” in Greek mean circle and “pteryx” means wing or fin.  This name is in reference to the circle-shaped pectoral fins that are possessed by fish in this family.

These lumpsuckers are well camouflaged from their predators and their suction disk helps them overcome their lack of an air bladder (this helps fish move up and down in the water).  Because lumpsuckers don’t have an air bladder, they are not great swimmers.

Spiny lumpsuckers are on average about 3 cm in length, but there are larger lumpsuckers that we have found, like the toad lumpsucker that you can see in the photo below.

You can read more about the spiny lumpsucker on the Aquarium of the Pacific’s website. 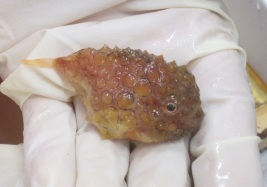 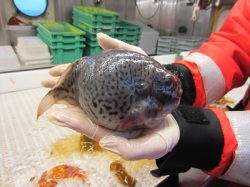