Giacomo Giorli explains the DIDSON deployment process to the team.

The DIDSON sonar in a protective case.

We are well into the second week of our cruise and I want to tell you all about a new pilot project that NOAA is working with through the Marine Mammal Research program at the Univ. of Hawaii that is using a DIDSON sonar. A DIDSON (Dual frequency IDentification SONar) is an advanced type of sonar that has many advantages over a traditional sonar for finding fishes and other marine life.

The first advantage of a DIDSON is that it gives us a very highly detailed image of what types of marine life are present in the water. When our shipboard acoustics team “sees” that there is a layer of creatures in the water column it appears as very small dots on a computer screen.

Here you can see the DIDSON going down to record the scattering layer (the very thin line near the finger).

This is great because it tells us the depth and location, but it does not tell us what it is. When we see something of interest, we can deploy the DIDSON to give us an actual “picture” of that creature or even a video of its behavior. The reason I am describing the “imaging” properties of this tool in quotes is that it is not a camera and it does not use light to see at all. Rather, it uses high frequency sound waves to produce an image much like a sonogram gives us a picture of a baby in a mother’s uterus.

Comparison of different types of sonar.

This leads us to another major advantage of the DIDSON over traditional technologies such as beam sonar or videos. This thing can go very deep into the ocean to explore the life that is there. If you recall back to my previous post you will remember that mesopelagic fish hang out much deeper in the water column during the day than at night. Trawling that deep is challenging and requires more effort and resources than using the DIDSON. If we want to see what is down there we can deploy the DIDSON into the scattering layer and get a sense of the marine life in the deeper parts of the ocean. Also, because it uses sound it can give us data about behaviors that are occurring in the dark regions of the ocean. 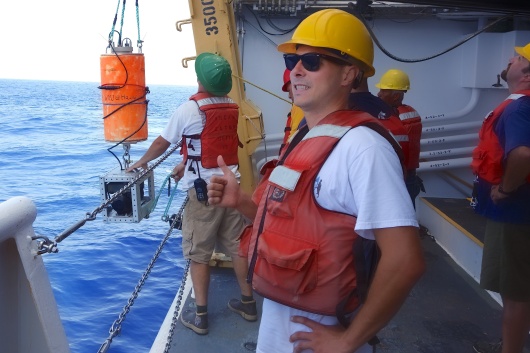 Mr. Giorli wishing luck to the DIDSON equipment as it is deployed.

Giacomo Giorli and others that are leading this project on the cruise are still going through the data they’ve collected with the DIDSON.  So far, they have seen a lot of success and have a identified a few squids – but they won’t tell us more than that until they go back to the lab to fully analyze their data.  “We don’t exactly know what is down there right now, but with emerging technology, one day we will,” says Mr. Giorli. See a video clip of the DIDSON data here.

The ever-useful duct tape makes its debut on this cruise.