Radar is an acronym for radio detection and ranging. Radar was developed just before World War II for military use but now serves a variety of purposes including weather forecasting. Radar is an electronic device which transmits an electromagnetic signal, receives back an echo from the target and determines various characteristics of the target from the received signal. Doppler radar adds the capability of measuring direction and speed of a target by measuring the Doppler Effect, or the component of the wind going either toward or away from the radar.

The NASA TOGA C-Band radar has a range of 300 km. In addition to the TOGA C-band radar, the ship has both S and X band radar. These three systems allow large and small-scale forecasting capabilities. 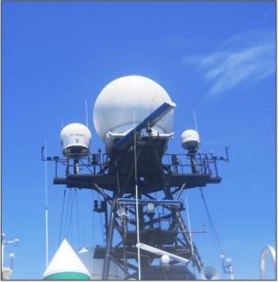 During Leg 3 of Project DYNAMO, TOGA radar scans are performed in the following intervals:

Below are examples of radar scan images of a single storm cell and rainfall provided courtesy of Owen Shieh.

The TOGA Radar image on the left is a horizontal image looking down on the rain. The ship is in the center. North is straight up toward the top of the image. The radar range is 150 km. The arrow indicates a single storm cell that is located 40 km from the ship. Towards the east (right side of the diagram) are large areas of light rain, indicated by white arrows. Radar image on the right is a vertical cross-section through the storm cell (indicated by the black arrow). The top of the storm extends up to 5 km and contains moderate rain indicated by the yellow color.

TOGA Radar image on the left is the same as above, except taken 10 minutes later. Notice that the storm cell (indicated by the black arrow) is closer to the ship, approximately 37 km away.

The TOGA radar image above is taken from a range of 300 km. These images are taken every 30 minutes. There are four areas of light to moderate rain surrounding the ship (indicated by white arrows). Notice the scale of the storm cell (indicated by black arrow) looks considerably smaller. The large-scale TOGA Radar image allows a wider view of the aerial distribution of rain.

The day after Thanksgiving, the Ocean Mixing Group decided to pull the T Chain out of the water after discovering a couple of damaged cables. The Chief Scientist ultimately decided to move the ship to another location on the other side of the buoy. It was extremely windy that day and the team was trying to perform this task in hard hats which constantly blew off in the wind. I am sure we looked extremely comical to those who were watching. In addition, we had to juggle large pieces of foam used to protect the T Chain which promptly blew away. There were at least seven of us and I thought we probably looked like a scene from a Marx Brothers movie.

We are experiencing squalls on almost a daily basis that are separated by quiet calm periods and occasional sunshine. Weather data indicates that we may be in the active phase of the MJO. I managed to get some interesting sunset photographs with the cloud formations.

This photograph was taken at sunset on the Indian Ocean between squalls. Image credits: Jacquelyn Hams

This photograph was taken at sunset on the Indian Ocean between squalls. Image credits: Jacquelyn Hams

My students want to know how I am adapting to the lack of privacy. This is not my first time on a ship and I own a sailboat so being at sea is not an uncommon experience for me. However, being at sea this long with so much to accomplish in a short time has caused the lack of privacy to become a big issue for me. In addition to covering the 7 science groups for this blog, I am teaching the last 5 weeks of my classes via distance education and posting assignments for my students based on data obtained on this cruise.

There are little things on the ship that make the lack of privacy more tolerable. There are steak Sundays that include a tasty non-alcoholic ginger beer – a weekly treat. There is also Yoga everyday from 1:00 p.m.to 2:00 p.m. I brought one of my yoga DVDs from home as did others so we have a variety of programs and do not get bored. The standing poses are difficult on a moving ship, but I manage to get through it.

I am beginning to realize that I enjoy my time on the winch with Chameleon because that is the only time I am physically alone. I am thinking to myself how crazy and scary it is that my idea of spending quality alone time involves a noisy sampling instrument! But alas, even Chameleon cannot make up for the fact that I miss my own private bathroom.

One morning while waiting for the sunrise on the bow, I was treated to quite a show of jumping fish. The fish are tuna and are jumping to avoid predators. I have seen jumping fish many times while on the winch, but never so many and for such an extended period of time. They continued their performance until well after breakfast. I shot this video shortly after breakfast.