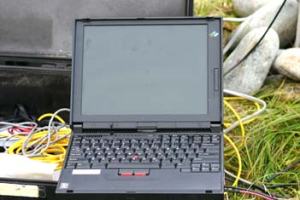 I got the day off from the launches so I could catch up on my paper work and study up on onboard life. I slept in an extra hour, but as I emerged from my cabin for a late breakfast, Lt. Ben Evans asked me to accompany him over to the radio transmitter site.

I grabbed my backpack and within three minutes I sped across Cushing Bay in an open Zodiac pushed by a 115 horse motor.  The wind had strengthened over night and we had more waves on our side of Mitrofania Island. We bounced over the waves and quickly reached the landing site. Our coxswain carefully eased the Zodiac towards shore and as a swell moved away from the beach we jumped out into ankle deep surf.  The coxswain quickly backed up the Zodiac before the next swell could push it on to the beach.

Lt. Evans and I walked up to the transmitter site located in a grassy meadow about 150 feet from the water’s edge.  Lt. Evans pulled out a volt meter and soon determined that the transmitter computer failed to turn off last night and drained the batteries.  The station had stopped transmitting yesterday afternoon due to a software problem.  Normally a set of solar panels recharge the transmitter station’s four batteries when the computer operates correctly. The following pictures show the troublesome computer and the solar panels: Lt. Evans decided to take the computer back to the RAINIER to reload the software and figure out the system problem.  A crew plans to return tonight with the computer and a fresh set of 12 volt batteries. Just as we had landed at the site, we quickly boarded the Zodiac in between swells to prevent the boat from beaching or knocking against us. We returned to the RAINIER just in time to catch her set sail for a new work location.

Around 11:30 am, the RAINIER weighed anchor and sailed 7 miles north to Fish Ranch Bay adjacent to the southwestern Alaskan peninsula.  The new location will protect us from the strong north east winds that started to rock the ship yesterday.  As we crossed over to the new location, the RAINIER rocked side to side as 2-foot waves blown in from the Gulf of Alaska hit our starboard side. We entered the calm waters of Fish Ranch Bay and saw a large, pyramid shaped peak to the north, green colored mountains on the east and west, and a view of Mitrofania Island 7 miles to the south across open water.  The survey launches crossed earlier and passed us while mapping the harbor we’ve entered. I spent the rest of the afternoon looking at our new surroundings and finishing up my paper work. In the evening, Mike Laird and I went out with four other crew members in a skiff to try out the fishing.

I had a relaxed day and felt good about completing my paper work.  I enjoyed seeing how the transmitter site had change since my last visit.  The crew had added a battery bank, solar panels and electronics to the site that I had not seen before.

Our biggest adventure of the day started after supper with a fishing expedition.  Carl Verplank and Mike Riley took Mike Laird, Matt Boles and Josh Riley (Mike R.’s cousin) out in the R8 open boat to teach us how to fish Alaskan waters.  We drifted over by a small bank and soon caught fish.  I caught my second “keeper” halibut just on an 8 pound test line and a cheap $ 30 pole. My line broke just as Carl netted my halibut. Both Mike R. and Carl reeled in decent halibuts and then Mike L. surprised everyone when he landed a salmon off the bottom using halibut gear.

After a couple hours, we motored over to a steep embankment below the old town site of Mitrofania. Drifting along, we suddenly had fish on three lines and started hauling in sea bass. Sea bass tend to school and go into a feeding frenzy when one fish finds food.  The bass weighed from 1 to 3 pounds and measured 6 inches to one foot in length. We saw sea bass rise up from under our skiff and watched two or three fish go after one lure. We released the smaller fish and kept the larger ones.

We headed back to the RAINIER at 10:15 pm in the evening light with sunset still a half an hour away. On the back of the RAINIER we cleaned and cut up our fish with guidance from Mike Riley while Carl carefully cleaned R8 and the deck as the dusk became night.  I clean and cut up my first halibut and helped Mike Laird with his fish.  We finally finished the last fish and stored our catch in the reefer (boat language for refrigerator) at 1:00 am.  It will be tough to get up in the morning, but I won’t forget this evening for a long time.

Question of the Day

Why do sea bass school? Is this an advantage or disadvantage to their survival as a species?