Since the Okeanos Explorer is known as “America’s Ship for Ocean Exploration,” it is equipped with two important vehicles that allow scientists to study normally inaccessible ocean depths. Deep Discoverer (D2) is a remotely operated vehicle (ROV) that is mechanically designed with software and video engineering programs that generate precise images and videos. A total of nine cameras, including a Zeus Plus camera with impressive zoom capabilities, produce high-definition images that give scientists and those on shore insights about deep-sea ecosystems. The 9,000 pound ROV contains approximately 2,400 feet of intricate wiring as well as specially designed Kraft predator hand that can hold up to 200 pounds. The hand is especially useful for deep-sea sampling and allows scientists to bring certain organisms to the surface for further analysis. D2 can dive up to 30 meters per minute and is designed to withstand pressures almost 600 times that at sea level. 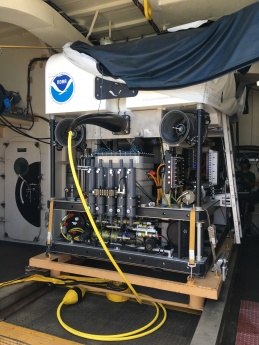 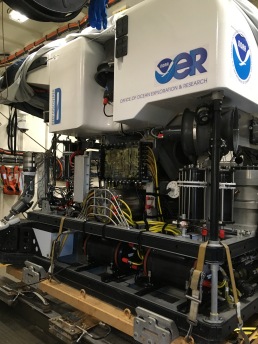 Side view of D2 (Check out the intricate wiring and size of the circuit board!)

D2 does not operate alone during the eight-hour dives. Instead, it relies on assistance from Seirios, another 4,000-pound machine known as a camera sled. This device is powered and controlled by the Okeanos Explorer and offers the pilots and scientists a wide-angle perspective as they navigate the ocean floor. Seirios is tethered to the Okeanos Explorer and illuminates D2 from above to allow for increased visibility. The frame of this machine is relatively open which increases the distance cameras can be separated from the mounted lighting. This design reduces the light that reflects off particles in the water (optical backscatter) and results in high-quality images.

All of the deep ocean images and video collected by D2, Seirios, and the Okeanos, can be transmitted to the rest of the world by satellite. The Okeanos is fitted with telepresence technology that enables everyone involved in the operation to provide scientific context to the public. The ability to broadcast this exciting information requires effective collaboration between the Engineering Team, NOAA ship crew, and scientists both onboard and onshore. It is amazing that anyone with Internet connection can be involved the expedition and science in real time.

In order to make it back to Norfolk on time for dry dock, we will have to finish our mapping our survey area on the 27th. In the meantime, we have been continuing to process data, collect sunphotometer readings, launch XBTs, and play cribbage. Our cribbage tournament will conclude on Friday night! Everyone aboard is excited about the data we’ve collected and looking forward to a successful end of the expedition.

The first fully developed ROV, POODLE, was created by Dimitri Rebikoff in 1953. However, it was not until the US Navy took an interest in ROVs that this unique technology became very popular. In 1961, the US Navy created the Cable-Controlled Underwater Research Vehicle (CURV).