It is fitting to add a section on weather because tonight we are seeing a lightning storm! I can even hear the fog horn. During Bridge Watch, weather data is logged every hour around the clock. Every four hours, it is entered into a computer system. On most days, we are fortunate to get a weather report in various character voices over the intercom from ENS Krabiel.

My favorite tools are the wind wheel, alidade, and relative humidity thermometers.

I have also sat in on a number of data processing evenings with the Survey Team. In one evening, roughly 50 GB of data from multibeam sonar only was processed. It is estimated that a total of 11 TB has been processed since April. Data processing begins around 7:30 pm and the survey team analyzes all information collected during the hours of 7am- 7pm. Staying on top of processing is important because of the massive amounts that accumulate, especially from side scan sonar.

Julia Wallace, physical scientist, showed me one aspect of processing multibeam sonar. She takes a file of data and runs a “flier finder” with a parameter of 0.5 meters (appropriate for the depth of sonar.) Essentially, the flier finder is marking any outliers that fall outside of this range. Julia then manually goes through and “hides” these points so that they do not contribute to the data set. This is important because when this data is used to mark bathymetry (sea floor depth) on nautical charts, it will somewhat randomly “grab” these false sounding set numbers and could land on one of the outliers, resulting in a false depth.

From what I have witnessed and gathered through multiple conversations with the team, the data collected by the Thomas Jefferson for NOAA charts is extremely accurate. For example, every pixel (or node) on the multibeam sonar grid represents no coarser than 1 square meter of the sea floor. This has changed from about 30 years ago where the ratio was 1 nodel: 5 square meters. In addition, many processes are doubled-up as a check for validity. This includes crosslines for checking main scheme data and operating two multibeam frequencies at the same time.

The use of this technology paid off! All eight sites sampled varied in texture and sediment size. Using this process of selectively choosing sites of interest based on “multispectral” backscatter intensity has replaced taking numerous random bottom samples using a grid. Again, this is a highly accurate and time-saving process. It was also interesting seeing the actual sea floor that we are mapping.

A GoPro is located in a cage on the bottom sample claw. Video footage of the sea floor enables hydrographers to view the substrate and current ripples in the sand. ENS Krabiel wears the control on his wrist to activate the camera.

I have enjoyed hearing the back-stories of the crew. For example, Allison Stone, Chief Survey Technician knew she wanted to be a part of NOAA when she was in 6th grade- the same age as my students. She remembers going to a parent career night at school and speaking with a presenter from NOAA. The presenter was enthusiastic about their job which inspired Allison to pursue a placement with NOAA. Although she envisioned counting marine animals and snorkeling daily, she is still passionate about her work in hydrography geoscience and speaks highly of NOAA outreach.

Field Operations Officer, Lt. Anthony Klemm started out wanting to do a public service and became a teacher. Later, he joined the NOAA Corps and after completing basic training got a job at the Marine Chart Division in Washington DC. It was during this time that he was given a lot of flexibility and time to create and test his own ideas and experiments. In his words, some of them flopped. However, one idea that has recently captured attention is the idea of “crowdsourcing” bathymetry. Collecting, processing, and submitting data for the official approval and update of NOAA nautical charts is a long process. It can take months for charts to be updated and available to the public. Crowdsourcing bathymetry is a way for the general public to gather and submit sonar data using simple devices like a “fish finder” that one might find on a recreational boat. These could serve as interim bathymetry data until the areas can officially be surveyed and charted. It’s also simple (users select a setting), and free.

You can read more about this program at: 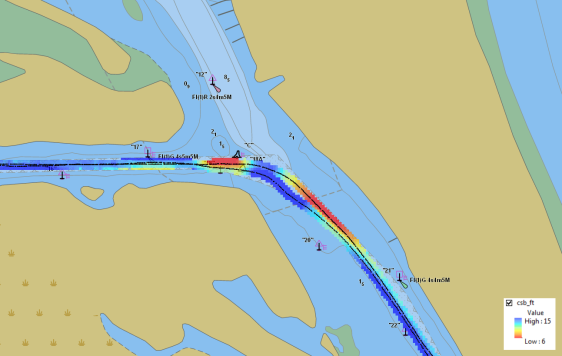 + Participated in a simultaneous medical/fire drill.