Everything about working in the Arctic is a lesson in patience and flexibility; one must learn to “go with the floe”. 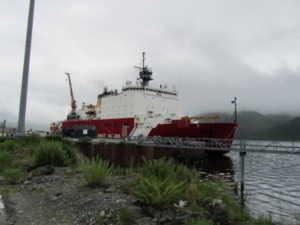 Bow of the USCGS Healy 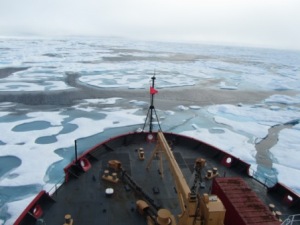 View of Ice Breaking from the Bridge

Since our primary objective is to collect bathymetric data, the locations of transect lines were determined before the mission to best meet the objective. Some lines provide data about previously unmapped areas; others fill in gaps between existing data tracks. We are able to follow the plan when we are in open water, but once we are in the ice, sometimes plans change. This became immediately apparent when I went on watch on the night of 7 August. We were heading north in the Beaufort Sea into thicker ice. There was a flurry of activity in the geophysics computer lab. The scientists were studying the ship’s track and the latest satellite images of the ice. We were on course to encounter some very large floes. I was about to get my first real taste of what an ice breaker does.

An ice breaker is designed differently from other ships. It is double-hulled with extra thick steel at the bow, stern and water line. It has a flat hull with a rounded bow that slopes gradually upward to allow it to ride up over the ice. (I am told that same feature makes it roll considerably in rough seas, though thankfully the Healy’s design is somewhat modified from the earlier Coast Guard ice breakers, so it does not roll as much as it could!) There are numerous mechanical modifications that allow ice breakers to work in an environment that would crush other ships. (See Cool Antarctica for a good summary of the characteristics of ice breakers.) The ship weighs over 11 tons, and the basic principle of ice breaking is to ride up over the ice and allow gravity to do the work, using the ship’s weight to fracture the ice. Healy’s typical cruising speed is 12 knots, with a maximum of 17 knots; depending on ice conditions, Healy’s speed typically decreases to 7 knots, and it is often necessary to go even slower through large floes, particularly if the multibeam is not recording good data. In the thickest ice, the ship uses a technique called “backing and ramming” which is pretty much exactly as it sounds – the ship is driven on the ice, then backed up and driven back onto the ice again. But while Healy is a powerful ship, a large tabular floe of multiyear ice has a lot of inertia, and it takes an incredible force to move it. More often than not, it is a better idea to try to find a way around the large floes instead of breaking through them.

The next few photos show what happens when Healy breaks through ice. Cracks radiate out in all directions as the weight of the ship is forced into the floe. The deep blue color indicates that much of the ice is “multiyear ice” – ice that has lasted through at least one summer melting season.

Things got tricky after that. Notice the change in scale on the second map, which shows the ship’s progress over the next 3 hours until point “11” at 4:00 a.m. (12:00 UTC) on the 8th. In that time, we covered 15.48 nm and had to deviate off a straight line course and change direction several times to maneuver around ice. Our average speed continued to be about 5 knots, but there were times during that stretch when the speed was a low as 1 or 2 knots. Relative to the original planned straight line course, the distance covered in that period was 6.7 nm.

Map 3 shows the remaining course we followed for that transect (the right hand track line) – note again the different map scale. We covered the remaining distance along the line between points 11 and 12, about 91 nm, over the next 3 hours. The trackline on the left shows our subsequent course, about a day later.

It takes a special ship to do what Healy does, and it takes a crew and science team who are capable, flexible, and cooperative to get the job done.

A lot happened in the last few days. If you pay attention to the location information at the beginning of some posts, you will notice that we have traveled north and south, east and west through the Beaufort Sea between the Mackenzie Delta region on the Canadian coast and the Prudhoe Bay area of the Alaska coast. We had the long-awaited rendezvous with Canadian Coast Guard Cutter Louis S. St. Laurent on Tuesday 10 August. Three members of our science team (two marine mammal observers and one ice analyst) went to the Louis and three members of their team joined us on the Healy. It was exciting to watch the helicopter exchange of personnel. I was not prepared for how fast the helicopter moved, and I was not quick enough to capture any close-ups. 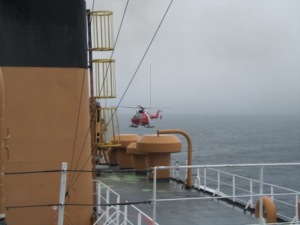 Here’s a look at the helicopter approaching the helo pad aft on Healy and flying back to the Louis.

Here’s a look at the helicopter approaching the helo pad aft on Louis and flying back to the Healy.

We took some cores of the seafloor on Wednesday and Thursday – more on that exciting change in routine in another post. We were out of the ice for several days, and I missed it, but we are moving north again now, farther north than we have been so far and we have started the cooperative part of the mission, in which Healy will lead and break ice forLouis.

Tomorrow, it seems, is Saturday. It is extremely hard to keep track of the days at sea, especially when there is not much darkness at night. Saturday is cleaning day, so we have to make sure everything is “ship-shape” in our staterooms and the science work areas. Stay tuned for some photos of my room after it’s neat and tidy!