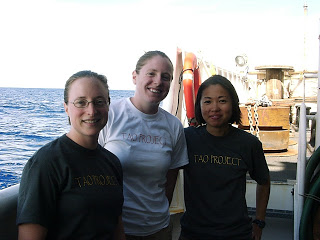 You might notice that it looks like Rick is in a fog, well he is. The difference between the inside of the ship and the outside of the ship in regards to temperature and humidity is huge. The ship is generally around 21 degrees c or close to 70 degrees F with low humidity and outside has been close to 31 degrees c or about 87 degrees F with high humidity. When you bring something like a camera outside from the cooler interior of the ship the moisture in the humid outside air condenses on the camera and instant fog.

We painted the international yellow on the top half of the four tolroids and now all the buoys will be the new color scheme, no more orange and white top half’s anymore.

You may have noticed that the sky is gray and the sea is fairly calm. We are in the Doldrums, an area of low pressure and often very little wind. This area is also known as the “Horse Latitudes”. Do you know why?

While we were waiting for the paint to dry we watched Alen refresh the sonic releases that connect the anchor to the nylon anchor line. Each of these releases costs about $12,000 and it is essential to use them over and over so replacing the battery, the rubber “O” rings and filling them with argon is a must after they are recovered with the anchor line Nilspin and nylon, pretty much ever thing that can be re-used is reused in order to minimize the cost of the project. Because we are able to use the acoustical releases only the iron anchor and some chain are left on the bottom of the ocean where they rust away eventually. It is hard to see but just before the releases are approved for re-deployment Argon is put into the body of the refreshed unit to provide and inert environment for the electronics. By removing the air, the risk of oxidation to the components is reduced.

Cleaning up the lab

After lunch the paint was dry enough that we taped in prep for painting the black waterline and we put the TAO on the donuts.Now these are ready for deployment on the next two legs of the cruise. We also had some time today to interview some of the crew on the KA. Today we chatted with three of the four young Ensign’s who are stationed on this ship. We asked them a variety of questions about life in NOAA and the types of degrees that they have and their interests. We discovered that one of the Ensign Rose (white shirt) is from Wyoming and that Rick went to school with one of her uncles and that she is distantly related to his wife through a cousin. Weird how small the world really is.

Two days ago, on 1/16/10, we conducted the last deep CTD at about 3,000 meters (about 2 miles). Rick had about 130 cups to send down and Art ran an experiment with control for Rossiter School in Helena. Just to review, this operation sends down a large, round instrument with tubes that collect water samples at different depths up to 3,000 meters. The intent of this procedure is to measure the salinity, Temperature and Pressure at different depths of the Ocean. As the depth of the ocean increases, so does the pressure of the water. An experiment that we can do to see the strength of the pressure is to attach a bag of Styrofoam cups to the CTD instrument. As the instrument sinks, what do you think would happen to the Styrofoam cups? Look at the picture of the cups before being sunk into the ocean depths and after. How would you describe the pressure of the ocean waters at 3,000 meters?

The batch of cups, back from the depths