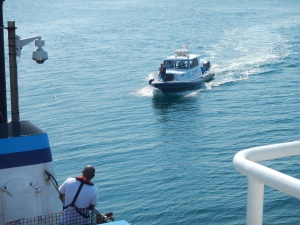 Members on the Nancy Foster await the arrival of the dive team.

Last night the dive team arrived.  The team consists of Jared Halonen, Hampton Harbin, Lauren Heesemann, Richard LaPalme, Katie Mahaffey, Randy Rudd, Sarah Webb and of course Chief Scientist Sarah Fangman.  The divers quickly settled into the ship.  We then had a science meeting where diving safety and the diving tasks were discussed.  The divers than had to have their gear checked and it was loaded into the dive boats.

The dive operations began this morning.  The beautiful, calm waters from the past 2 days changed into choppy water with up to 3 foot waves.  The divers reported strong currents and a relatively large thermocline as they descend.  A thermocline is where there is a change in the temperature.  The divers reported a noticeable change in the temperature of the water as they descended.  These conditions gave the divers a bit of a challenge.

The two dive teams set off to complete their morning dives

The divers were very successful today.  They completed 2 fish acoustics surveys.  Lauren and Randy dove to two different sites.  At each site, Lauren had to identify and count all the different species of fish.  Randy had the task of filming the site and capturing images of the different fish, especially any predator-prey relationships.  They were able to see many different species of fish.  The data gathered by Lauren and Randy will be used to compare to the acoustic data that is being recorded from the ship at this location.

The other dive group was tasked with replacing the Telemetry Receivers.  In the morning this group consisted of Sarah Fangman, Randy, and Hampton.  In the afternoon, Hampton and Jared completed this task.  Together, the different dive teams were able to replace 5 receivers.

The receivers were brought on the ship and the data was downloaded to a computer.  Every time a microchipped fish swam past these receivers, the receiver recorded the information.  When the data is downloaded, you are able to see the number of the microchip from those fish and the date and time that they swam by the receiver.  Using a database of microchip numbers generated by a group of scientists along the East Coast of the United States, we are able to identify the fish that have been in the area.  From today’s data, we learned that Gray’s Reef had two visitors, an Atlantic Sturgeon in early March and Sand Tiger Shark in early April.  Both were originally tagged in Delaware. 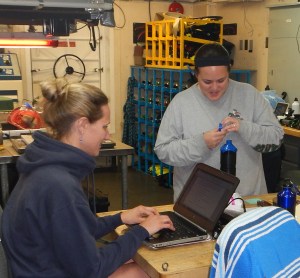 While the dive teams were out I kept busy on the Nancy Foster.  In the morning I helped prepare logs for the Acoustics dive team.  I also spent time at the bridge learning about the ship’s systems.  Operations Officer, Lieutenant Colin Kliewer, and Junior Officer, Ensign Conor Maginn showed me the different systems in the bridge and explained how they are able to keep the ship in a precise location using the two thrusters on the ship. 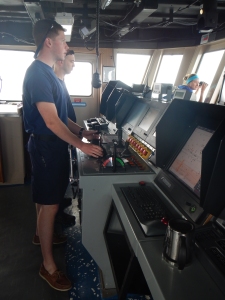 In the afternoon I assisted Chief Scientist Sarah Fangman with the receivers that were brought on board.  Using Bluetooth, she was able to download the data from the receivers to her computer.  We then used the Microchip Data table and identified the tagged fish.  We finished the project by cleaning the receiver and preparing them to be placed back into the ocean tomorrow.  We prepared them by wrapping them in electrical tape and then placing them in nylon stockings.  This is to protect the receiver from the organisms that will grow on them.  Please see the “Before” and “After” photos below.

The Receiver Before it is placed in the water. It is wrapped with electrical tape and then placed inside nylon stockings.

This receiver was in the water for 4 months. It is covered in tunicates, tube worms, and small crabs

We finished our day with a science meeting.  We discussed the dives that occurred today.  Issues, tips, and advice were shared.  We also shared the data that was discovered on the receivers as well as the animals that were seen.  Additional tasks for the diving teams were discussed including the sea turtle identification, the removal of the lionfish, and fish surveys.  After the meeting concluded the group prepared for tomorrow’s dives by filing the SCUBA tanks, programming the GPS in the boats, and finishing preparing the receivers and logs.

The divers prepare for the dives by programming the GPS, checking the gear, and loading the gear into the boat.

There is a fish called the guitarfish.  This fish is a cartilaginous fish closely related to sharks and rays.  One was spotted today at GRNMS.

As of 5 pm tonight, I have been a board the Nancy Foster for one week.  I cannot believe how quickly the time has flown by.  It feels like it was just yesterday that I boarded in the pouring rain, afraid to move around the ship.  It took me a while to become comfortable walking on the ship.  I am doing pretty well now, but every once in a while we hit a swell and I go flying toward the wall.  Luckily the ship has railings all over allowing you to catch yourself.  There is the rule on the ship to always have one free hand.  I completely understand this rule and use it all the time.  The most difficult places to move are going up or down in the ship.  The stairs are a combination of stairs and a ladder.   They are incredibly steep.  The most difficult part is descending.  I am getting much better at them.  I am having a wonderful experience aboard the Nancy Foster.  I have met many great people and am constantly learning.  I cannot wait to see what this next week brings.

Lowering the dive boats in the water is a team effort.

The crane lifts the boat, 4 members use guide ropes, and the boatswain directs the movement.