A panoramic view from Yaquina Point, gray whales can often be seen from the Point on their migration route, one of the longest in the animal kingdom.

From my time onboard I have learned it takes a lot of people to run a ship this size, which helps explain why, due to a staffing issue, we have been delayed until tomorrow, Friday, at 1000. All scientists and crew are being asked to assemble on deck at 0800 for a briefing where I imagine we will go over responsibilities and safety precautions before heading out to sea.

Our run has changed its course slightly since cutting down to 13 DAS (days at sea); we will now cruise between Southern Oregon and Gray’s Harbor, WA, with all the same mission objectives. While we haven’t gone anywhere yet, this time in port is affording me the opportunity to explore Newport and assist in and observe research that is being done by the scientists on land.

Newport has a considerable number of marine science facilities and most of the scientists I will be working with have or will have labs here in which they process the data they collect while in the field—the field can either be the sea or the land, depending on the study—and while the various organizations at the Hatfield cooperate and share research findings (as all good scientists do), there are distinctions in terms of what each scientist studies and, essentially, who pays them to do it. 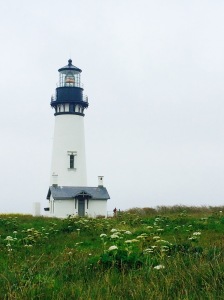 The lighthouse at Yaquina Head.

Let’s start at the beginning. Most of the scientists going on this cruise of the Shimada are biologists. Biologists are scientists who study living things (bio-life, ology-study of) and so far I have met two kinds. Amanda’s specific field of biology is ornithology (making her an ornithologist), which specializes in the study of birds. Will Fennie, among others who you will hear more about, is an ichthyologist, a scientist who studies fish. For both, they will work at sea and on land to first collect and then process the information or samples (known as data in the scientific community). As I mentioned before, Amanda works with the Seabird Oceanography Lab at Oregon State University and starting in the fall semester, Will will begin his Ph.D. studies there as well. Other scientists on board are affiliated with other schools, like University of Oregon and Yale University, and some NOAA employs directly. You’ll meet some of them later on.

So, while I may not be at sea, I’m taking every opportunity I can to learn about how these scientists work, what their lives are like on and off the ship and what the significance of their research is. Yesterday, I rode with Amanda up to the Yaquina Head Outstanding Natural Area (it’s a beautiful name, really, but hereafter I will refer to it as Yaquina Head). Yaquina Head is home to Oregon’s tallest and second oldest lighthouse, one of a series that were built along the coast to guide fisherman home. It also happens to be home to a unique nesting site, also known as a colony, for many species of seabird, including the western gull and common murre.

Common murres return to their nesting sites once the eagles are out of sight.

We were there to try and adjust an antenna that was meant to pick up VHF signal (very high frequency, just one of several different radio signals that can be used) for a common murre she and her lab mates had previously tagged. Scientists use trackers (or “tags”) for a variety of reasons because they allow them to collect information on the birds’ location. This information will be put into a computer program that can then organize it so scientists can look for trends. Trends are patterns in data, which scientists analyze to gain new understanding or develop theories (ways to explain why these trends exist). For example, maybe the data will show a trend of no pings at the colony for several hours and scientists might theorize that eagles came to hunt during that time, scaring the murres away.

All of that was just hypothetical, but in fact, eagles had been hunting at Yaquina Head earlier that morning so thousands of murres were off the colony and sitting in the water. If you click on the first image in this post and zoom in you can see what look like black dots in the water. Each one is a seabird. As Amanda and her lab technician, Ian, worked to try and get the signal to come in clear without static, I wandered and watched for birds. I was also hoping to spot a spout, the tell tale sign of a whale or dolphin, but, alas, no luck.

In the end, the antenna issue was not resolved. Amanda said another member of her lab would be able to come out and take a look at it, another upside of being able to work in collaboration with others. At sea, she will mostly work solo, keeping a careful watch for various seabird and marine mammal species, but she’s already recruited me for data entry so that while she watches, I can help keep track of which species are spotted, what they were doing when they were spotted, and which direction they were traveling. All of this will be GPS stamped and stored to create a database of information, which will be shared among labs and researchers at different universities and institutions. When it’s operating at its best, science is a collaborative endeavor with the end goal being better understanding of our world. 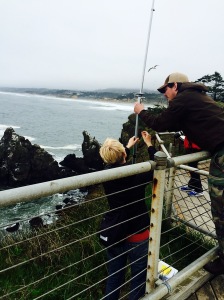 Amanda and Ian adjust the VHF antenna to try and catch 24-hour GPS data for a tagged common murre.

Today, I wanted to hike on the South Jetty to get a bit of exercise so I caught a ride with Will who was heading out to surf. If you choose to be an oceanographer or marine biologist, odds are you’ll end up living most of your life by the ocean, so if, like Will, you enjoy being in the water, it’s certainly something to consider.

A panoramic view of the South Jetty and the beaches of Newport.

Hiking out on the South Jetty, the path is easy-going for the first 150 feet or so, after that the distances between the rocks require a more careful eye and take up a bit more of your attention. Every now and then I would stop and try to catch a decent close-up picture of some of the seabirds that were constantly flying overhead.

A cormorant flies by me.

The sheer number of animals that live off the Oregon coast can keep your head turning for hours, which is good because I was trying to split my time between watching the horizon for spouts and snapping photos of the gulls, cormorants and murres. My eyes may have been playing on tricks on me—I really, really want to see a whale—but I swore I saw a spout. A big part of me wanted to take off running down the jetty to get a closer look, but that was a near impossibility unless I wanted to run the risk of jumping from rock to slippery, yellow-lichen covered rock. I did however manage to get a few of the types of photos I was hoping to get.

A flock of what appear to be cormorants.

After a quick coffee run, Will and I decided to check out the Oregon Coast Aquarium. While it can boast being a member of the top-10 best aquariums in the country, I think its real claim to fame is its former celebrity resident, Keiko the orca (killer whale), star of Free Willy, the 90s film that launched a generation of children who wanted to grow up and become marine biologists.

The aquarium focuses on education about the different marine life native to the Oregon coast, with exhibits on sea otters, harbor seals and California sea lions as well as the mysterious giant Pacific octopus. We were lucky to catch the rotating exhibition on shipwrecks, which focused both on the process by which archaeologists discover, unearth and study artifacts from shipwrecks in order to learn the story of their demise and how they become teeming centers of life, functioning as artificial habitat, once they make their way to the ocean floor.

For our last night in port, Ric wanted to bring together as many of the scientists and crew as he could to give everyone an opportunity to get to know each other a bit before we made way. I met Tyler Jackson, a marine biologist from Oregon State University who is studying crab populations and Emily Boring, an undergraduate from Yale University. She’s just finished her freshman year, and she’s taking advantage of her summer to learn a bit more about a career she’s been interested in since she was in fourth grade. I would say that Emily is making a great choice to learn more and she’s definitely getting a head start if a life of research is what she ends up wanting.

In darkness, we drove across the Yaquina Bay Bridge for the last time, the lights from restaurants and homes outlined the coast and traced down the docks, drawing our eyes to the Shimada, illuminated and waiting for us to take to the sea. 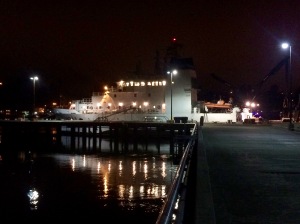 Giant Pacific octopus are highly intelligent and have such sophisticated camouflage that they can mimic color and texture of their surroundings, allowing them to hide and then pounce on their prey.