The oceanographic work on the boat can be divided into three categories: physical, chemical, and biological. In this log, I will explain a little bit about the part of the research related to the physics of light. Upcoming 5th graders – pay attention! We will be learning a lot about light in January/February and it all relates to this research project.

Brian and Maria are two PhD students who are working with the physical components. They are using several optical instruments: the SPECTRIX, the GER 1500, the Profiling Reflectance Radiometer (PRR), and the Profiling Ultraviolet Radiometer (PUV). 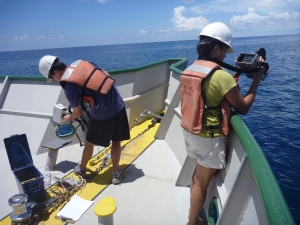 The SPECTRIX is a type of spectroradiometer that measures the light coming out of the water in order to understand what is in the water. For example, we can measure the amount of green light that is reflected and red and blue light that is absorbed in order to get an idea about the amount of chlorophyll in the water. This is important because chlorophyll is the biggest part of phytoplankton and phytoplankton are tiny plant-like algae that form the base of the food chain on Earth.

Brian lowers PRR into the water

The PRR and the PUV measure light at different depths to also understand what is in the water and at what depth you will find each thing in the water. The light becomes less bright the further down you go in the water. Most of light is between 0-200 meters of depth. The light that hits the water also becomes less bright based upon what is in the water. For example, you might find that chlorophyll live at 10 meters below the surface. It is important to understand at what depth each thing is in the water because that tells you where the life is within the ocean. Most of the ocean is pitch-black because it is so deep that light cannot penetrate it. Anything that lives below the light level has to be able to either swim up to get food, or survive on “extras” that fall below to them.

These few days have been very fun and action-packed! I arrived on the ship on Sunday afternoon and helped Nelson and the crew get organized and set-up the stations for the cruise. Several other people had also arrived early – two graduate students who are studying the optics of the water as part of their PhD program, one college student and one observer from the Dominican Republic who are like me – trying to learn about what NOAA does and how scientists conduct experiments related to oceanography.

On Monday morning, we gathered for a team meeting to discuss the mission of the cruise, introduce ourselves, and get an updated report on the status of the Mississippi River water. It turns out that the water is going in a bit of a different direction than previously projected, so we will be changing the cruise path of the ship in order to try to intersect it and collect water samples.

I am helping lower the CTD into the water

Monday we all learned how to use the CTD (a machine that we use to collect samples of water from different depths of the ocean) and other stations at the first several stops. It was a bit confusing at the beginning because there is so much to learn and so many things to keep in mind in order to stay safe! We then ate lunch (delicious!) and had a long 4-hour ride to the next section of stops. When we arrived, it was low tide (only 2 ft. of water in some places) so we could not do the sampling that we wanted to do. We continued on to the next section of stops (another 3 hour ride away!), watched a safety presentation and ate another delicious meal. By this time, it was time for the night shift to start working and for the day shift to go to bed. Since I am in the day shift, I was able to sleep while the night shift worked all night long.

Today I woke up, took a shower in the very small shower and ate breakfast just as we arrived at another section of stops. I immediately started working with the CTD and on the water chemistry sampling. We drove through some sea grass and the optics team was excited to take optical measurements of the sea grass because it has a very similar optical profile to oil. The satellites from space see either oil or sea grass and report it as being the same thing. So scientists are working to better differentiate between the two so that we can tell sea grass from oil on the satellite images. The images that Maria and Brian took today are maybe some of the first images to be recorded! Everyone on the ship is very excited!

Several hours later, we came to a part of the open ocean within the Florida Current near Key West where we believe water from the Mississippi River has reached. Nelson and the scientific team believe this because the salinity (the amount of dissolved salt) of the surface water is much lower than it normally is at this time of year in these waters. Normally the salinity is about 36-36.5 PSUs in the first 20 meters and today we found it at 35.7 PSUs in the first 20 meters. This may not seem like a big difference, but it is.

Additionally, the water from the Mississippi River contains a lot of nutrients – for example, fertilizers that run off from farms and lawns into gutters and streams and rivers – and those nutrients also impact the sea life and the water in the area. Nelson says that this type of activity (fresh water from the Mississippi River entering the Florida Current) occurs so infrequently (only about ever 6 years), scientists are interested in documenting it so they can be prepared for any changes in the marine biology of the area.

For all of these reasons and more, we took a lot of extra samples at this station. And it took almost 2 hours to process them!

In the evening, we stopped outside of Key West and the director of this program for NOAA, Michelle Wood, took a small boat into the harbor because she cannot be with us for the entire cruise.

Sunset over Key West - a beautiful way to end the day

She asked me if I’d like to go along with the small boat to see Key West, since I have never been there before, and of course I agreed! I got some great pictures of the R/V Walton Smith from the water and we saw a great sunset on the way back to the ship after dropping her off with Jimmy Buffet blasting from the tourist boats on their own sunset cruises.

We will be in the Mississippi River plume for most of tonight. Everyone is very excited and things are pretty crazy with the CTD sampling because we are doing extra special tests while we are in the Mississippi River plume. We might not get much sleep tonight. I will explain in my next blog all about the chemistry sampling that we are doing with the CTD instrument and why it is so important.

On a ship, they call the kitchen the “galley,” the bathroom is the “head,” and the bedrooms are called “staterooms.”

One interesting thing about the ship is that it does not have regular toilets. The ship has a special marine toilet system that functions with a vacuum and very thin pipes. If one of the vacuums on one of the toilets is not closed, none of the toilets work!

Hola! My name is Caitlin Fine and I teach science at Escuela Key (Francis Scott Key School), a dual-language immersion elementary school in Arlington, VA. I am a Virginia native and my heart is constantly torn between the lively activities of the Washington, D.C. area and the peaceful beauty of the Shenandoah Valley. I left Virginia for college and graduate school, but returned 4 years ago to begin my teaching career for Arlington County Public Schools.

On top of Aspen Mountain during a recent trip to Colorado

Although I majored in Political Science and Spanish Literature and I have graduate degrees in Spanish Literature and Multicultural Education, I have always been interested in science. During college, I worked on an organic farm in Andalucia, Spain that practiced permaculture (this is a way of using the land that is sustainable so that the soil does not use-up all of its nutrients). I also traveled around the Southern Cone of South America (Chile, Argentina, Peru, Bolivia, Brazil) studying the geology of the region. As you can see, I have some experience with farming and the mountains. But I have never really spent an extended time at sea — I have never slept on a boat or studied the marine ecosystems up close and personal over a period of time. I hope that I am not seasick!

My interest in science mixed with my love of cooking has created a current obsession — the health of our national and global food and water supplies. Did you know that every time we take medicine or use pesticides on our plants, a small amount of it enters the water supply and some of it ends up in the rivers and oceans nearby where fish and water plants are trying to live?

The science program at Key is a bit different from traditional elementary schools in that there are three science teachers who teach all 630 students. For the past two years, I have taught the Kindergarteners, the 2nd graders and half of the 5th graders. Key kids are amazing scientists — they are full of questions about how the world works and they are not afraid to get busy trying to figure things out on their own through hands-on inquiry and cooperative learning. I cannot wait to return to Key with new knowledge of oceanography, ocean-related careers and ways to monitor the health of the ocean to share with my students and colleagues!

I am so excited to be a Teacher at Sea for the National Oceanic and Atmospheric Administration‘s 2011 Field Season! Teacher at Sea is a program that provides allows Kindergarten through college-level teachers to live and work alongside scientists on research and survey ships. The goal of the program is to help teachers understand our ocean planet, environmental literacy, and maritime work so that they can return to the classroom and share information with their students about what it is like to be a real scientist who studies the ocean.

I will be on a 5-day cruise on the R/V Walton Smith in south Florida.

This is the R/V Walton Smith

From what I understand, we will be taking measurements across the south Florida coastal marine ecosystem (the southwest Florida shelf, Biscayne and Florida Bays, and the Florida Keys reef tract). The program is important because the research has helped scientists keep an eye on the sensitive marine habitats, especially when the ecosystem has had to deal with extreme events, such as hurricanes, harmful algal blooms or potential oil spill contaminants. We will test the circulation, salinity, water quality and biology of the ecosystem.

During this cruise, I have been told that we might be able to measure Mississippi River water because it might enter our survey track.

Scientists are also going to be trying out new optical measurement tools! It sounds as though I will have a lot to report back to you about!

Please leave me a comment or any questions you have about the cruise.

Please take a moment to take my poll: