Temperature and salinity are two main variables when determining the density of water. The density of water or any acoustic medium is a very important factor in determining the speed of sound in water. Therefore, temperature data collected by Expendable Bathythermograph (XBT) probes, as well as historical salinity profiles from the World Ocean Atlas, are used to create sound velocity profiles to use to correct for sound speed changes in the water column.

Expendable Bathythermograph (XBT) probes are devices that are used to measure water temperature as a function of depth. Small copper wires transmit the temperature data back to the ship where it is recorded and analyzed. At first, I was surprised to learn that temperature data is such an important component of multibeam mapping operations; however, I learned that scientists need to know how fast the sound waves emitted from the sonar unit travel through seawater. Since these probes are designed to fall at a determined rate, the depth of the probe can be inferred from the time it was launched. By plotting temperature as a function of depth, the scientists can get a picture of the temperature profile of the water.

On our expedition, we have been deploying XBTs on a schedule as the ship is making its way to the survey area. The XBT Launcher is connected to a deck box, which translates information to computer systems onboard so the data can be logged when the probes are deployed into the water. Aboard the Okeanos Explorer, up to 8 tubes can be loaded at one time and launched by scientists. 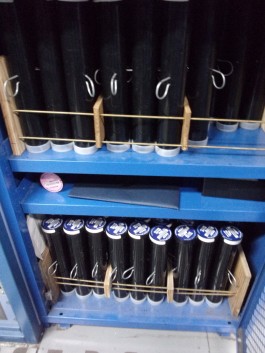 XBT closet in the Dry Lab

XBT Launcher on the Okeanos

Savannah and I after a successful XBT load 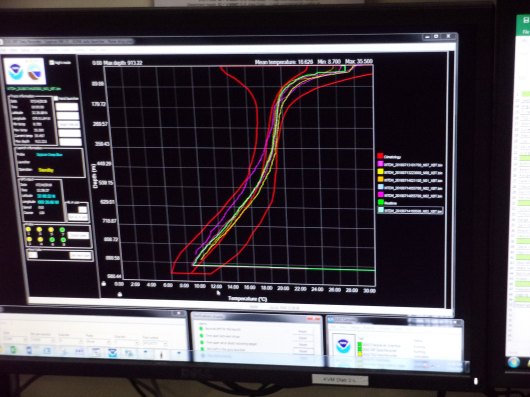 XBT Data from a launch aboard the Okeanos Explorer. The colors on the graph indicate the XBT number and the data is plotted on a temperature and depth scale.

In addition to launching XBTs and collecting data, we completed a Daily Product so that we can communicate the data we have collected to anyone on shore. The Daily Products are completed not only to ensure that the hydrographic software systems are working correctly but to also inform the public our current location, where we have collected data, and if we are meeting the objectives of the mission. Once onshore, NOAA uses this information to analyze the quality of the data and use it for analysis for dive planning. In order to generate the Daily Field Products, we use hydrographic computer systems such as QPS Qimera for advanced multibeam bathymetry processing, Fledermaus for 4D geo-spatial processing, and Geocap Seafloor for digital terrain modeling. In addition, the Daily Field Products allow us to double check the quality of the data and search for any noise interferences due to the speed of the ship or the type of seafloor bottom (hard vs soft).

One of the coolest parts of learning aboard the Okeanos Explorer is the fact that I am a part of scientific exploration and discovery in real time.  Known as “America’s Ship for Ocean Exploration,” the Okeanos Explorer is the only federally funded U.S. ship assigned to systematically explore our largely unknown ocean for the sole purpose of discovery and the advancement of knowledge. This is the first U.S.-led mapping effort in support of the Galway Statement on Atlantic Ocean Cooperation and all of this information is going to be available for public use. Not only do I get the opportunity to be involved with “real-time” research, but I am also responsible for communicating this information to a variety of different parties on shore.

Being immersed in the “hands-on” science, learning from the survey techs and watch leads, and observing all of the work that is being done to collect, process, and analyze the data is a really exciting experience. I am definitely out of my element when it comes to the content since I do not have any prior experience with seafloor mapping, sonars, etc., but I am really enjoying playing the role as the “student” in this situation. There is definitely a lot to learn and I am trying to soak it all in!

XBTs contain approximately 1,500 meters of copper wire that is as thin as a strand of hair!

How do scientists use acoustics to locate pollock and other organisms?

Scientists aboard the NOAA Research Vessel Oscar Dyson use acoustics, to locate schools of fish before trawling.  The Oscar Dyson has powerful, extremely sensitive, carefully calibrated, scientific acoustic instruments or “fish finders” including the five SIMRAD EK60 transducers located on the bottom of the centerboard.

Scientists are using the EK60 to listen to the fish.

This “fish-finder” technology works when transducers emit a sound wave at a particular frequency and detect the sound wave bouncing back (the echo) at the same frequency.  When the sound waves return from a school of fish, the strength of the returning echo helps determine how many fish are at that particular site.

Sound waves bounce or reflect off of fish and other creatures in the sea differently.  Most fish reflect sound energy sent from the transducers because of their swim bladder<s, organs that fish use to stay buoyant in the water column.

The above picture shows the location of the swim bladder. (Photo courtesy of greatneck.k12.ny.us)

Click on this picture to see how sound travels from various ocean creatures through water. (Photo from sciencelearn.org)

These reflections of sound (echoes) are sent to computers which display the information in echograms.  The reflections showing up on the computer screen are called backscatter.  The backscatter is how we determine how dense the fish are in a particular school.  Scientists take the backscatter that we measure from the transducers and divide that by the target strength for an individual and that gives the number of individuals that must be there to produce that amount of backscatter.  For example, a hundred fish produce 100x more echo than a single fish.  This information can be used to estimate the pollock population in the Gulf of Alaska.

These are the echograms that are produced by the EK60.  Five frequencies are used to help identify the type of fish.

The trawl data provide a sample from each school and allow the NOAA scientists to take a closer look by age, gender and species distribution.  Basically, the trawl data verifies and validates the acoustics data.  The acoustics data, combined with the validating biological data from the numerous individual trawls give scientists a very good estimate for the entire walleye pollock population in this location. 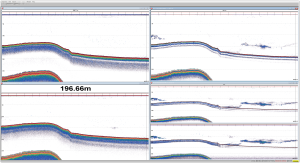 These echograms are similar to the ones produced when we trawled for krill. Krill have a significant backscatter with the higher frequencies (bottom right screens)

How I spent my shift on Saturday, July 27th?

When I arrived at work at 4 pm, a decision was made to trawl for krill.  A methot trawl is used to collect krill.

Then we set to work processing the catch.  First we have to suit up in slime gear because the lab will get messy.  My previous blog mentioned not wanting to count all of the krill in the Gulf of Alaska.  But in this case we needed to count the krill and other species that were collected by the methot trawl.

I needed my reading glasses to count these small krill.

How many krill do you think we collected?

This is the total krill from the first methot trawl of the night.
How many are here?

Patrick, the lead scientist, put a few specimens under the microscope so we could see the different types of krill. 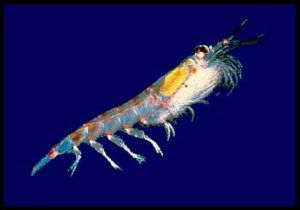 The collection of krill was preserved in formaldehyde and sea water.  It will be sent to Poland for further species diagnosis.

Scientist Darin Jones preserves the krill for shipment to Poland.

As the ship continued back on transect, I wandered in to see what Jodi and Darin were doing with the data collected last night.   Jodi was processing data from the multibeam sonar and Darin was surveying the images from the drop camera.  Jodi was very patient explaining what the data means.  I will write more about that later.  But I did feel quite accomplished as I realized my understanding was increasing. 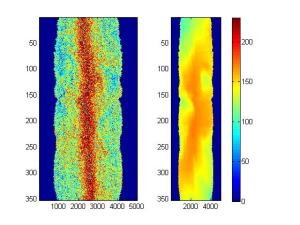 These images are what Jodi was processing.

A decision was made to do another methot trawl.  This time we had a huge sample.

In an approximately 50 gram sample we counted 602 individual krill.  Compare this to the 1728 individuals in a 50 gram sample from the first trawl.  They were much bigger this time.  The total weight of the entire sample of krill was 3.584 kilograms.

This was the haul from the second methot trawl.

How many individuals were collected in the second trawl?  (Check your answer at the end of the blog)

Around midnight, Paul decided to verify an echogram by trawling.

Emptying out the trawl net right next to the fish lab.

We collected data from the trawl net and the pocket net.

This trawl had a variety of specimen including Pacific Ocean perch, salmon, squid, eulachon, shrimp and pollock.

The pocket net catches the smaller organisms that escape through the trawl net. 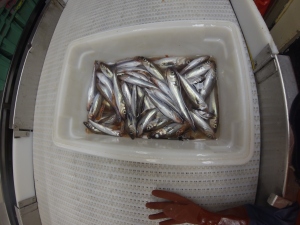 These were caught in the pocket net.

It was after 2 am by the time we had processed catch and washed down the lab.  The internet was not available for the rest of my shift due to the ship’s position so I organized my growing collection of videos and pictures.

I wasn’t sure how I would handle my night shift (4 pm to 4 am) after I dozed off during the first night.  Now that I have adjusted, I really enjoy the night shift.  The night science team of Paul, Darin and Jodi are awesome.

People who are on the Oscar Dyson live throughout the United States.  They fly to meet the boat when they are assigned a cruise.  Jodi is from Juneau, Alaska.  Paul is from Seattle, Washington.  And Darin is from Seattle/North Carolina.  There are a number who are based out of Newport, Oregon.

Something to Think About:

When we are fishing, a number of birds gather behind the boat.  What different sea birds are observable this time of the year in our survey area?

Many sea birds follow the ship hoping for some of our catch.