Mission: Shark/Red Snapper Longline Survey
Geographical Area of Cruise: Gulf of Mexico
You can view the geographical location of the cruise here at any time: http://shiptracker.noaa.gov/
Date: Tuesday, August 12, 2014

There is no fishing for the next couple days so I thought I could use this update to talk a little about one of the unique science career opportunities aboard the ship.

The NOAA Commissioned Officer Corps is one of the Nation’s seven uniformed services (the others being Army, Navy, Marine Corps, Air Force, Coast Guard, and Public Health Service). The NOAA Corps basically ensure that everything is safe and running smoothly with the ship. NOAA Corps officers have a solid background in science, math, or engineering. There are four Corps officers aboard the Oregon II, and many more in locations all around the world, such as Guam and Antarctica.

While visiting the bridge today I spoke briefly with ENS Laura Dwyer who spoke to me about her history with NOAA and her duties onboard the Oregon II. Laura grew up as a “water baby” as she phrased it. She originally has a degree in International Business but after a few years of traveling and diving decided to go into the NOAA Corps. Her duties onboard the ship are to basically make sure the ship and passengers onboard are safe. Some of this has to do with using charts to maneuver through traffic in the sea.

The charts are in fathoms which show water depth. The Oregon II tries generally to stay out of water that is more shallow than 60 feet.

When it rains, it pours. That’s Florida weather anyways. Yesterday we left port in the pouring rain. There is something calming about the rain pounding outside the ship, like a persistent reminder of the awesomeness of mother nature. Although there are thirty one of us on board, the ship can be surprisingly quiet. Today in the moments after we left port I found some time to soak up the experience with Tom Waits in my ears. Perfect.

We don’t start fishing for another day or two, and I am eager to get out the longlines to survey fish, take data, and learn new things. But for now, I am content to be around a passionate crew of men and women (scientists, engineers, chefs, crew hands, IT support, medics, ship officers, students, etc…) who love what they do. I am going to try to quickly highlight somebody different for each blog post to recognize some of the talented people aboard.

How did you get involved with NOAA: Steve joined the Army after high school and found that he was good at cooking. He got married young and didn’t want to leave the military so he could support his family. He found his comfort zone in the culinary field. He served in the First Persian Gulf Conflict and left the Army in 1992 to work in Pennsylvania as a Kitchen Manager for the Department of Public Welfare. He continued his education while working in the Pennsylvania Department of Corrections and also teaching a class called Restaurant Professions in the prison system. For many years he taught in the prison and also furthered his education in the process. At age 50 he had 25 years of service and retired with full benefits before starting on the Oregon II in 2014.

What is your favorite part of the job: Steve enjoys the “closeness of the crew”. It feels like family, since it is a much smaller operation. He calls it a fun, cool job, and a unique opportunity that many people never have a chance to experience.

The food onboard the Oregon II is excellent. There are three hot meals served every day, and everything is delicious. Steve is a pro.

Steve works with the second cook Mark Potter. Mark’s been working on many different ships and rigs (besides just NOAA ships) since 2011 and really enjoys it. Mark is actually my roommate! He went to school at the Great Lakes Culinary Institute, in Michigan. Mark is a funny guy who constantly cracks jokes with a friendly demeanor. He will not let me take a photo for fear that he will “break the camera” (his words).

Did you know? In 1972, NOAA Corps became the first uniformed service to recruit women on the same basis as men (http://www.history.noaa.gov/legacy/time1900_2.html). Also LCDR Eric Johnson told me today that NOAA Corps at last tally has approximately 25% female officers. This is more than any other!

The weather has been rather difficult here over the past day or so. Yesterday, the winds were so bad that we had to cancel fishing from our bandit reels. We had winds up to 23 knots, or about 26 miles per hour! So far today’s weather seems to be much the same, so no fishing today either. 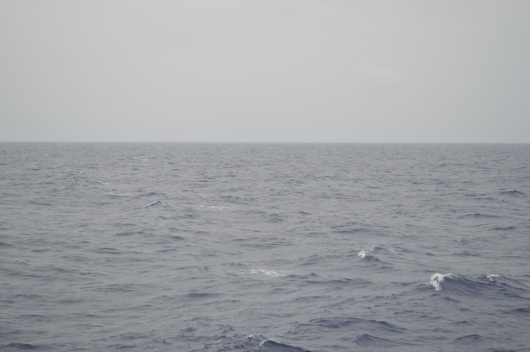 It’s been a very wet and gray couple of days at sea.

We keep putting the camera array in the water, even though we can’t fish. But with the winds, waves, and current as strong as they are, the team has to be much more careful about getting the camera in the water and getting it back out again. The cameras are very expensive, so they have to take care that nothing happens to them. It’s been taking a couple of tries to get the boat lined up enough to get the camera array out of the water. Thus, the whole process takes much longer in the rougher weather. 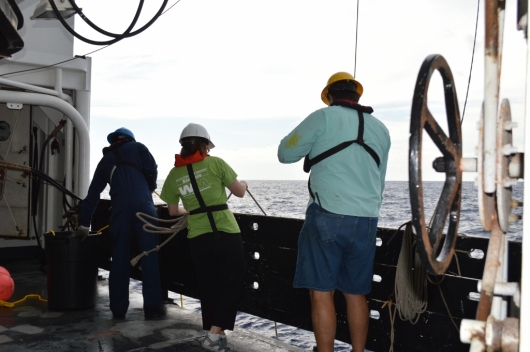 This is me helping to deploy the camera array in better weather.

Since the science has been a little slower than usual, I figured that I would use today’s post to talk a little bit more about the crew in command of the Pisces, and how the ship gets to these sometimes remote places to conduct our scientific research. 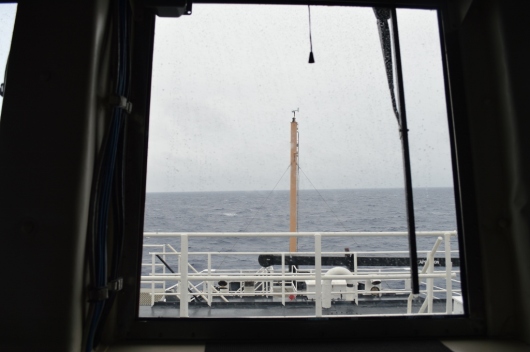 The view from the bridge. Forecast: rain.

The ship’s officers come from the NOAA Corps. NOAA has its own commissioned officers, 321 in total, spread across 19 ships and 12 airplanes. I’d never known that NOAA had its own officers, so I’ve been fascinated to learn how the process works. In some ways, it’s similar to any other uniformed branch of service, with basic eligibility requirements – US citizenship, pass a medical exam, etc. There are also some that are a little more specialized to NOAA, though. For example, you need a bachelor’s degree, with at least 42 credit hours in “science, math, or engineering course work pertaining to NOAA’s missions.”

Applications are competitive, with those for the next cycle being accepted until August of this year. You have to be able to get and maintain a Secret level clearance to be a NOAA Officer, so they’re selective for a reason.

The officers have to be aware and involved with the scientific work on board. They’re responsible for putting the ship into position for the operations to occur. The scientific team selects sites for survey out here in the Gulf, but it’s the ship’s officers that put us in position to drop the camera and/or go fishing, when the weather allows. They also have to be aware of what’s going on with the science team, to make sure that our fishing lines don’t catch on the bottom of the boat, or that the cameras aren’t damaged when the deck crew raises and lowers the array.

The science only happens when everyone works together.

Life on a boat is different. There’s the obvious, with it taking a while to learn to walk again or with seasickness, if you’re so inclined. (I’ve been spared that misfortune so far, even with the bad weather!)

One thing unique to boats is the amount of different doors.

There are a series of watertight doors, designed to protect the rest of the ship if a portion floods. These doors would hopefully contain any problems that occurred and keep the ship afloat. All of the doors that open to the outside are watertight. 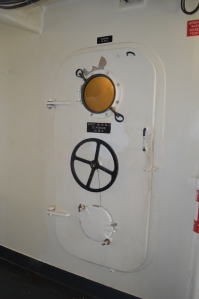 These doors can be very loud when you open them, so you have to be careful. The ship has crew working 24 hours a day, which means there’s always someone sleeping.

In addition to the watertight doors, some of the interior doors act as fire boundaries. They’re very, very heavy – I can turn the handle and lean into them and they don’t move. It’s heavy for a reason, though. We have A60 doors on the Pisces, which have been designed to withstand an open flame for up to an hour.

Not all interior doors are fire boundaries though, just as not all doors were meant to be watertight. For example, in the hallway that leads to my bunk, the stairwell to my deck has a fireproof door but my room itself only has a “normal” door. The other end of the hallway opens up to the outside, so it has a watertight door.

I’m definitely getting a workout every time I go in and out of a room!

The United Nations has a specialized agency devoted to maintaining safety in maritime shipping called the International Maritime Organization, or IMO. The IMO regulates everything from pollution from ships to the design of the ships themselves.