One thing that I have learned on this trip (don’t worry, I have learned more than one thing) is that the government, and scientists, like to use abbreviations for equipment, procedures, and groups of people.  For example,  did you know that MACE stands for Midwater Assessment Conservation Engineering?   Well, now you do. The NOAA scientists that are aboard the Oscar Dyson work for the Alaska Fisheries Science Center, which is part of MACE.  Three of the abbreviations that I have become familiar with are:  CTD (conductivity, temperature and depth), XBT (expendable bathythermograph), and Drop (Drop camera).  These are devices or procedures that the NOAA scientists use on board the Oscar Dyson to gather information that will help in determining the biomass of Pollock. 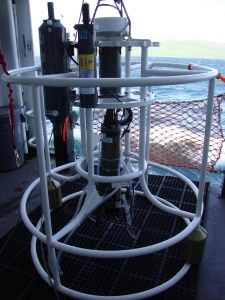 The CTD measures conductivity, temperature and depth of sea water.

When I say “the CTD”, I am referring to a device, but the letters actually come from the procedures that the device performs.  It is lowered into the water on a cable, and its instruments measure the conductivity (how much electricity will pass through – an indirect way of measuring salinity) and  temperature of the sea water, and depth.  Niskin bottles may be attached to the CTD frame to collect sea water at selected depths.  This information gives scientists knowledge about sea water properties, and over time, will indicate changes in the environment.

Watch this video to see the data as it is being collected. 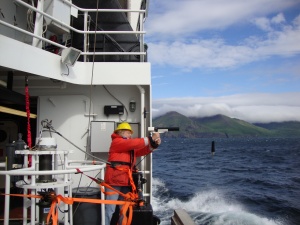 A hard hat and flotation device are required on the weather deck (any deck open to the weather), even to launch the XBT.

Launching the XBT has been one of my jobs on the Oscar Dyson, at least during my shift.  This device measures temperature and depth of sea water.  It is basically thrown overboard out of a handheld launcher, which looks like a giant pistol thing, and remains attached to a very thin wire.  Data is sent through this thin wire until it reaches the ocean floor, then the wire is broken.  The device is not retrieved – hence the name – expendable.

The data is graphed, and a beautiful thermocline is produced.  An XBT is launched 3 – 4 times a day, in different locations.

The Drop Camera is attached to a frame to protect it. The light is at the bottom of the frame.

The Drop Camera is an underwater camera that is lowered to the ocean floor.  The camera is pressure activated, so it starts recording at a certain depth.  It has a bright light that comes on when the camera is operating.  Extra line is fed out, because the ship is still moving, and the scientists do not want the camera to drag across the bottom.  It records for a few minutes, then it is hauled back to the boat, the memory card is retrieved, and the video is examined.  This information about the ocean floor is valuable to commercial fishermen, and future scientific missions.

The ocean floor close to Alaska's coast is home to a variety of sea stars, including brittle stars, as well as flat fish such as sole, flounder, and halibut. (NOAA Ocean Explorer) 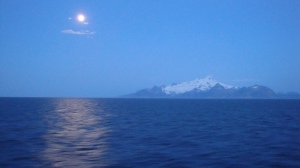 Today was a fantastic day for wildlife and scenery viewing, as the sun was shining, the winds were calm, and it stays light until midnight here in the Shelikof Strait, west of Kodiak Island.  I started the day by going to the bridge around 4:30 am, and was delighted to see a bright full moon, and volcanoes of the Alaskan Peninsula.  The day only got better, as the sun rose around 5:30 am. 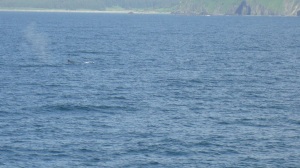 I have new respect for whale photographers, they are very hard to capture in a photo, here is my amateur attempt.

I spent a lot of time on the flying bridge, looking for whales, and finally took a photo of a spout and fin.  I was so excited!  You have to be looking at the right spot, at the right time.  Our transects take us close to Kodiak Island and its rocky cliffs, as well as the Alaskan Peninsula with its impressive glacier covered volcanoes. 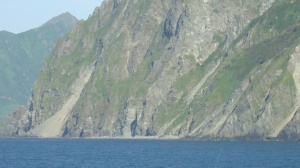 The cliffs of Kodiak rise straight up out of the sea, bold and stunning.

We had a successful trawl today, and I spent several hours in the fish lab.  My head was kept warm by this pink knit hat that my sister made for me.  Thanks, Jan!

Thanks, Jan, for making this hat for me, I was nice and warm while processing fish today!