Sometimes kittiwakes follow the ship. I caught this one as it passed by the Healy.

Part of NOAA’s mission is to conserve and manage marine resources. To this end, the Healy has a Marine Mammal Observer (MMO) on board. Our MMO is Justin Pudenz. He collects data on any interactions we might have with marine mammals during our voyage.  Both the Louis and the Healy have observers on board.

Using a field guide to identify the Yellow Wagtail

Justin spends his time on the bridge of the Healy, binoculars in hand, notebook near by, always on the lookout for life on the ice or in the air. He lives in southern Minnesota when he is not on a ship. Justin tries to spend 6 months at sea and 6 months at home. He has been a fisheries or marine mammal observer since 2001. The company he works for is MRAG Americas.  NOAA hires observers from this company when they are needed. While on board the Healy, Justin spends hours each day watching for marine mammals and recording his observations.  The data he collects goes back to NOAA.

Justin has traveled to many bodies of water as an observer including the Pacific near Hawaii and the Bering Sea for fisheries observation.  His next mission will be on a crabbing vessel in mid-October. If you can picture the television show “DEADLIEST CATCH” – that is the type of vessel he will sail on. On a fisheries trip Justin will collect data on the species of fish caught, their sex, weight, length and other information NOAA needs, to understand the health of ocean ecosystems.  Justin grew up enjoying the outdoors and always knew a desk job was not for him.  He has a degree in Wildlife and Fisheries Science and has been lucky enough to find a job that gets him outdoors and is ever changing.

A yellow wagtail has been seen from the ship in the past few days. I wonder what this bird is doing so far out to sea – ideas?

FOR MY STUDENTS: How are your observation skills?  Would a job at sea be a good match for you?

I asked Justin what he has seen from the Healy. Our “trip list” follows. The farther away from land we get, the fewer species of birds we see. Most of these bird species were spotted before we hit the heavy ice.

Many people have asked about the living spaces inside this ship.  It is an amazing vessel when you think about all that happens here.  The Healy is truly a floating city with 120 people on board.  Any function that your town does – this ship needs to do.  A city needs to clean water, sewage treatment, trash pick up, recycling, electrical power, food, shelter, and recreation.  All of these are provided for on the Healy. I have attached a few pictures of life on the Healy below.

Our bunk beds have curtains to keep out the 24-We each have our own desk and filing cabinet and hour sun. Note the stuffed polar bear. This was most important a porthole window! Notice the color a gift from Mrs. Campbell and Mrs. Taylor. outside – we are getting a few hours of twilight in the early morning hours.

This is the place where the science party relaxes, plays cards, and watches movies. 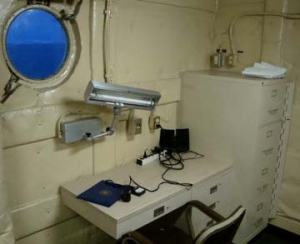 We each have our own desk and filing cabinet and most important a porthole window! Notice the color outside – we are getting a few hours of twilight in the early morning hours.

The main library has computers for the crew to email friends and family and plenty of reading material.

The Rainier’s a heavy ship!

Finally we are underway, having pushed off of the dock in Seward around 1500 on Monday, July 6. The cruise time to the area where RAINIER and her crew will be conducting hydrographic surveys is approximately 40 hours.  The distance is 519 nautical miles.  (One mile on land = 0.869 nautical miles, so 1nautical mile = 1.15 statute miles).  Thus far, we have traveled approximately 240 nautical miles in a time of 19 hours—just about ready to finish passing Kodiak Island to the port (left) side.

In the meantime, there is plenty to do aboard— learning about the many aspects of safety aboard a working vessel being the most important.  NOAA personnel new to the ship and guests watched a variety of safety videos as well as received our safety gear. My closet, which was fairly empty yesterday morning, is now stuffed with a survival suit (a.k.a. The Gumby Suit); a Float Coat (a warm orange coat that provides both buoyancy and warmth if you “go into the drink”, or fall overboard) and an inflatable safety vest that I will wear whenever I am working inside the cabin on one of the launches once the surveys begin.  We also had our abandon ship and fire drills. It’s very similar to the fire and safety drills we do in school.  Everyone has a specific place to meet (muster) and some have specific jobs to do or items to bring.  Like the sign on the fantail of the ship says: TEAMWORK SAFETY FIRST! 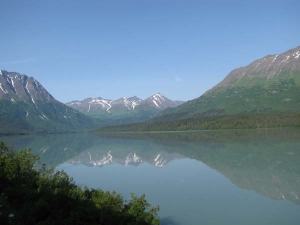 Alaska has many jagged volcanic mountains.

I’ve also had time to begin speaking to different members of the crew—their responsibilities, how they arrived on RAINIER, and what the hydrographic surveys will be like.  One of the most interesting conversations was with Steve Foye, a Seaman Surveyor.  Steve told me that RAINIER is scheduled for a complete mid-life repair after this year’s survey season is completed in September.  RAINIER will then go into dry dock and the repairs and changes will begin.  The entire inside of the ship will be gutted and remodeled.  While all of that is going on, a decision has to be made—where will RAINIER’s homeport be?  Steve brought up quite an interesting point: a port that has brackish (part salt/part fresh) water is better for the ship.  Why? When a ship is at sea for long periods of time, creatures such as barnacles cement themselves to the hull.  It’s essential to remove them; however, the process is costly—both in time and money. Having moving fresh water along the ship’s hull while docked for the “off season” will eliminate the barnacles. But there’s another problem—after a winter docked in fresher water, algae and plant material starts to grow where the barnacles once were.  Solution? Begin a new survey season and sail the ship in salt water.  The plant material is then eliminated, but guess what starts to come back?  An interesting example of a cycle.

It’s great to finally be a Teacher at Sea!  Not a Teacher on a Plane, or Teacher on a Train, or Teacher at Port.  I’ve been waiting a long time for this to get underway.  Thus far, the entire experience has been new.  I’ve had the opportunity to see some amazing scenery—the landscape is so different from that of Cape Cod, Massachusetts! Jagged volcanic mountains literally rise up from the water.  I’ve also seen some wildlife including bald eagles, otter, Dahl sheep, Arctic terns and a moose on the Alaska Railroad train that I took from Anchorage to Seward. We also passed three glaciers. The glacial melt off causes nearby lakes and streams to take on a milky light green color.

As far as being on the ship, this is my first at sea experience. I’m finding that it really reminds of my first days of college—living in close quarters; trying to get into a routine with a roommate; learning where things are and how schedules operate; figuring out the hierarchy of individuals. The constant movement is also something new.  I actually had a couple of fun rides in my bunk during the night!  I wonder if that’s what a Nantucket sleigh ride felt like. (A Nantucket sleigh ride, for those who don’t know, is a term from whaling days.  After a whale was harpooned, it would often take off, pulling the small boat of men behind it until the whale tired.)