The haul back is definitely the most exciting part of each station.  Bringing the line back in gives you the chance to see what you caught!  Usually there is at least something on the line but my shift has had two totally empty lines which can be pretty disappointing.  An empty line is called a water haul since all you are hauling back is water!

After the line has been in the water for one hour, everyone on the shift assembles on the bow to help with the haul back.  One crew member operates the large winch used to wind the main line back up so it can be reused. 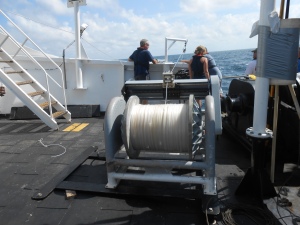 The crew member operating the winch unhooks each gangion from the main line  and hands it to another crew member.  That crew member passes it to a member of our shift who unhooks the number from the gangion.  The gangions are carefully placed back in the barrels so they are ready for the next station.  When something is on the line, the person handling the gangions will say “Fish on”. 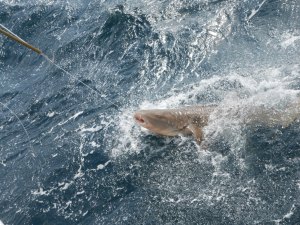 Nurse Shark on the line

Everyone gets ready to work when we hear that call.  Every fish that comes on board is measured. Usually fish are measured on their sides as that makes it easy to read the markings on the measuring board. 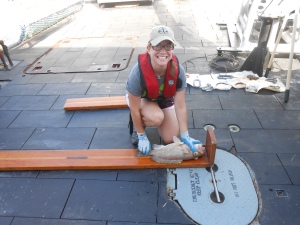 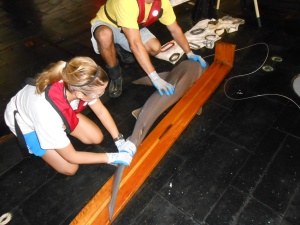 Each shark is examined to determine its gender. 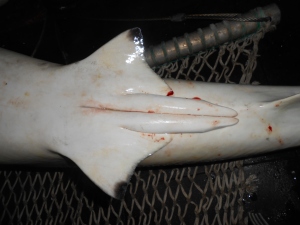 Claspers on a Blacktip

Fin clips, small pieces of the fin, are taken from all species of sharks.  The fin clips are used to examine the genetics of the sharks for confirmation of identification and population structure, both of which are important for management decisions. 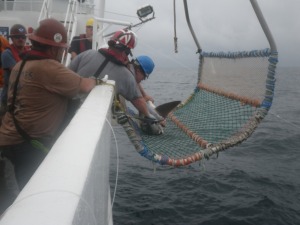 Skin biopsies are taken from any dogfish sharks  in order to differentiate between the species.  Tags are applied to all sharks. Tags are useful in tracing the movement of sharks.  When a shark, or any fish with a tag, is recaptured there is a phone number on the tag to call and report the location where the shark was recaptured.

Some sharks are small and relatively easy to handle. 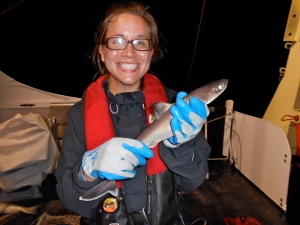 Other sharks are large and need to be hauled out of the water using the cradle.  The cradle enables the larger sharks to be processed quickly and then returned to the water.  A scale on the cradle provides a weight on the shark.  Today was the first time my shift caught anything big enough to need the cradle.  We used the cradle today for one Sandbar and two Silky Sharks.  Everyone on deck has to put a hardhat on when the cradle is used since the cradle is operated using a crane. 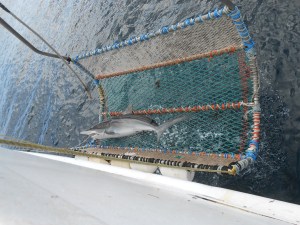 Silky shark coming up in the cradle 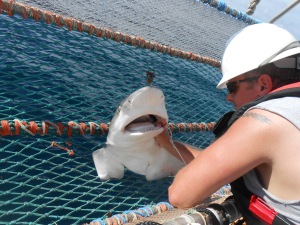 Sandbar Shark in the cradle

I continue to have such a good time on the Oregon II.  My shift has had some successful stations which is always exciting.  We have had less downtime in between our stations than we did the first few days so we are usually able to do more than one station in our shifts.  The weather in the Gulf forced us to make a few small detours and gave us some rain yesterday but otherwise the seas have been calm and the weather has been beautiful.  It is hard to believe my first week is already over.  I am hopeful that we will continue our good luck with the stations this week!  The rocking of the boat makes it very easy for me to sleep at night when my shift is over.  I sleep very soundly!  The food in the galley is delicious and there are plenty of options at each meal.  I feel right at home on the Oregon II!

Flying fish are active around the boat, especially when the spotlights are on during a haul back at night.  Flying fish are able to “fly” using their modified pectoral fins that they spread out.  This flying fish flew right onto the boat! 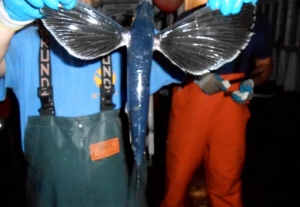 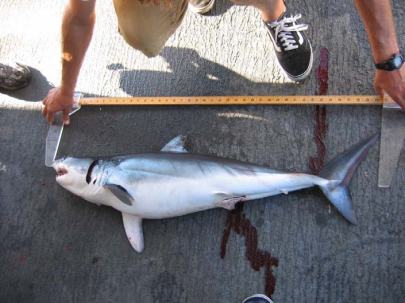 The mako sharks we catch are one to two years old and are between 70 cm and 140 cm (around 3 feet) long.

Our first full day of setting and hauling netted 68 sharks. In the morning we caught 21 blues and 5 makos, and in the afternoon 39 blues and 3 makos.  Unfortunately, one mako and one blue did not survive and were brought aboard for sample collections.  Though everyone involved understands that the work being done here is ultimately about helping these sharks survive and thrive in the wild even when an animal dies, there is, among everyone, a definite sense of loss and regret when an animal is lost. The data collection process involves a great deal of care for that reason.

Studies have been done to look at the stress related hormone levels of sharks caught on long lines, and the length of “soak times” used in this project follow those recommended guidelines—three to four hours from the start time of setting the line to the start of hauling it in. The design of long line helps to maximize survival, too. The gangions, which are the lead and hook assembly that attach to the long line, are about three meters long which gives these sharks room to swim while hooked.  This is important for blues and makos as they, like many other sharks, need to keep in constant motion so fresh, oxygen-rich water is always moving through their gills.

Another challenge is that, on occasion, a shark will swallow the hook, so whenever possible a “circle hook” is used that will not hook in the stomach or esophagus, but only on a “corner” of some kind.  If a circle hook is swallowed it will get pulled out by the shark’s movement away from the line but when the animal turns away, the circle hook will catch in its mouth.  Even if a hook, like a J-hook, cannot be removed from an animal because it was swallowed, this does not necessarily mean it will die.  Sharks with hooks in them have been released and recaught years later. When a shark does die, its body is utilized to understand sharks better.  This is especially true for the mako sharks.  Dr. Jeff Graham and two of his students, Dovi Kacev and Noah Ben-Aderet, as well as Miguel Olvera, another graduate student, are collecting a number of tissue samples for themselves and others at their home universities.

The gills of the mako sharks are of interest because makos are a high-performance, speedy, shark. A comparative anatomy study is being done to compare the design of their gills to that of tunas, another high-performance fish, though tunas are in the class of bony fishes, Osteichthyes, and sharks are cartilaginous being members of Class Chondrichthyes.  For this reason, the gills of available specimens are being collected.

Shortfin makos (and, incidentally, common thresher sharks which also might be seen on this trip) are among the very few warm-blooded species of shark.  Higher temperatures facilitate their higher energy usage as the fastest sharks in the ocean.  Makos achieve higher body temperatures, in part, because their “red muscle” tissue is located close to the spinal column and not, as in most other sharks, close to the skin.  This red muscle is responsible for maintaining prolonged periods of powerful movement.  This muscle works in tandem with the circulatory system to create a heat exchange system called countercurrent circulation. The internal location of the red muscle and the countercurrent circulation work to preserve heat and even warm the blood before it reaches the heart.  For these reasons, studies are being conducted on the red muscle versus white muscle are being sampled for later examination.

Because of the mako’s high performance, and the relation of that performance to the circulatory system, heart tissue is also being collected. The vertebrae of the makos is being collected, too, for the purposes of trying to determine the ages of the animals.  This was discussed some yesterday in the discussion of oxytetracycline injections.

Finally, a cutting from a fin is also being collected to later extract DNA.  Relatively little is known about the movement of makos (hence our tagging of them).  By examining the genetic relationship of makos sampled, researchers will be able to determine if makos off the California coast are related to makos in other parts of the Pacific, including the southern hemisphere.

Aside from the critters at hand, there have been lots of other activity to feed our curiosities. We’ve been seeing whale spouts, probably fin or blue whales, and Risso dolphins. Ann Coleman, an aquarist with Monterey Bay Aquarium and another member of the science team, suggested we might even see some molas!  Molas are the largest bony fish in the world reaching 1500 pounds and a record of 14 feet in total length!  We can hope!

Thankfully, I’ve had zero issues with seasickness.  In fact, I’ve rather enjoyed being rocked to sleep at night. And, thankfully, the food has been plentiful and quite yummy!  That’s all for now…