Everyday on the ship there are many other research projects that are occurring, in addition to the pollock survey. Other scientists (currently not on this leg) are collecting data from a multiple beam system to look at the characteristics of the ocean floor, such as roughness or sound reflectivity, using 30 sound beams (of various frequencies between 100 and 115kHz) in a fan-shaped configuration. For this project, the researchers use several devices. First, they need updated temperature and depth data, which allows them to calculate the speed of sound and the attenuation coefficient (how easily a fish is penetrated by a beam – a large attenuation coefficient means that the beam is quickly weakened as it goes through the fish), which vary as a function of temperature and salinity. To do this, they have chosen select locations to release an expendable bathythermograph, or “XBT.”

This chart shows locations for XBT drops. The yellow and blue stars show where on the transect the XBT should be released.

This torpedo-shaped device is launched overboard with a gun-like dispenser. It has a long coil of fine, copper wire that begins spinning out when it’s released and the wire transmits temperature data back to the ship through the cable in the launch dispenser, and then to the database in the lab. The depth is calculated based on the assumed descent rate of the torpedo.

Getting Ready to Launch

Link to Graph of XBT data

In order to confirm the suspected bottom composition from the multi-beam measurements, a drop camera is deployed at specific locations. The drop camera is usually performed off the side of the ship at night, so it doesn’t interfere with operations that can only happen during the day.  The deck crew will deploy the drop-camera using a hydraulic winch, where it is lowered to the bottom. The camera then records for 5 minutes of time at the bottom. Several camera drops are usually completed in an area.


Another operation that happens mostly at night, is using the “Drop TS” or Drop Target Strength echo-sounder. The DTS is used to get a stronger signal at closer range to fish. This helps the scientists differentiate the signals, or echo, that individual fish may give. Many fish have swim bladders (or air bladders) that allow them to regulate their buoyancy in the water. There is a large difference in the sound velocity in air and in water, so this swim bladder causes fish to give strong echo returns.  The DTS can give them a better idea of fish counts when looking at the echograms, but they aren’t perfect. No fish will remain still or perfectly straight. Just like the echograms from the single source mounted on the hull of the ship, the colors red and brown show strong signals, yellow is medium, and blue and green are weak.

This echogram was created with data from the DTS. Each wavy line is probably a separate fish.

We are now traveling south through Shelikof Strait. This body of water runs northeast to southwest along the Alaska Peninsula on the east side of the Kodiak Archipelago. It extends about 150 miles and is dominated by many glaciers, cliffs, and both active and dormant volcanoes. The Alaska Peninsula and Aleutian Islands are part of the Pacific “Ring of Fire.” This is a seismically active area because the Pacific plate is subducting below the North American plate. This has been occurring for millions of years, also giving glaciers time to scour away at the mountains, creating U-shaped valleys and sharp peaks. We’ve had particularly good weather the past few days and caught a great sunset behind the island-volcano Augustine. 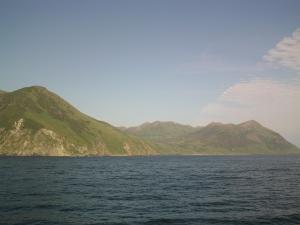 So far we are on day 2 (3?) of fair weather and partly sunny skies and I love it. Shelikof Strait is just amazing–there are volcanoes every direction you look and we’ve had beautiful sunset after beautiful sunset. The transect lines we are running in these waters run east-west so we are very close to shore every few hours which means lots of time for pictures. Tonight I went to the flying bridge with Kathleen, the other teacher, so we could whale watch. She had been up earlier (she works the day shift!) and saw a fin whale not too far from the shore and boat. We saw lots of whale blows far off in many directions, but none again that close.

Later after the sun went down and I had started my laundry and next blog entry. The net was in the water for another trawl. Luckily it wasn’t a big catch (I was tired and not ready to slice open tons of fish), but a very little one — literally! We caught mostly juvenile pollock and some smelt fish called eulachon and capelin. We also got our token salmon — we seem to catch one with every trawl — and some squid and jellies. We had some technical difficulties with the catch-processing program, so we were a little delayed in getting started and we had a team of two rather than three. Needless to say, we didn’t finish until after 2 am. Just in time to have some Cheerios for dinner.

The highlight of the night was Dall’s porpoises, which were following the boat to four different drop-camera sights! They were darting everywhere — it was fantastic!

NOAA Teacher at Sea
David Altizio
Onboard NOAA Ship Fairweather
May 17 – May 27, 2010 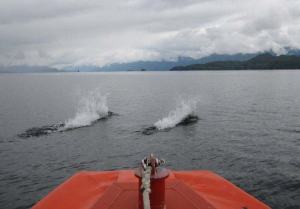 Dall’ porpoises racing along side the Ambar launch boat

I spent the morning on the smallest and most maneuverable of the launch boats on the Fairweather called an Ambar. Unlike the other launch boats that I was previously on, this one does not have a sheltered area so full cold weather/rain gear was needed. Our task was to collect sediment samples from the bottom of Shoalwater Pass and Princess Bay. We were the first of four launches to go out on this day. As we were being lowered down from the ship everybody started to notice porpoises all around us.

Me getting ready to lower the bottom sampler to determines edimentsizes of the channel floor.

Once the Ambar was deployed the porpoises began racing alongside the boat. They stayed with us for a few minutes.It was an awesome sight and an experience that I will never forget. Later, at lunch I was talking with the CO (commanding officer) and he told me that he had never quite seen so many porpoises ride alongside a launch boat for such a long time.

What I saw were Dall’s porpoises (Phocoenoides dalli)a species that is only found in the North Pacific; from the Bering Sea and the Gulf of Alaska (spring to summer) and in coastal waters as far south as Baja California (fall to winter). Their unique body shape makes them easy to distinguish from other porpoise species. They have a very thick body and a small head. Their coloration is much like an Orca (killer whale), with their bodies being black with white patches on their underside. Dall’s Porpoises are hugely active and playful creatures. They will often zigzag around at great speed on or just below the surface of the water creating a spray called a “rooster tail”. They often appear and disappear quite suddenly. They will approach boats and ride alongside, but may lose interest, unless the boat is travelling quickly.

Here is one of the Dall’s Porpoises surfacing for air.

Dall’s are usually larger than other species of porpoises, growing up to 2 or 3 meters in length and weighing between 280 to 450 lbs. This species of porpoise can live as long as 15 to 20 years. They feed mostly on squid and a variety of fish. They are the fastest of all porpoises; they can swim at or up to 35 miles per hour. They often appear in small groups. Today, I would say there were at least 15 to 20 of them, but they were so fast and difficult to count.
After the excitement, we drove over to Shoalwater Pass and began collecting our first of eight bottom samples. The information gathered from these samples is very helpful to ships that might be anchoring in a particular area. For example, if you anchor in deep mud, the anchor could become trapped or stuck in the mud, or if the bottom is very rocky the anchor would not be able to set into the bottom at all.
In order to collect the bottom sediments we had to lower down a heavy sampler and allow it to hit the bottom. In deeper water this was definitely more difficult. As you can see, we had to pull the sampler up by hand and hope that it had closed and collected sediments. It did not close every time we lowered it, so some of the site required more than one drop which made the task even harder.

Here I am pulling up the bottom sampler.Not as easy as it looks.

Of the eight bottom samples we collected, they ranged from sticky mud to angular stones, to pebbles. The classification system used for bottom samples includes the following names: mud, clay, silt, sand, stones, gravel,boulders, lava, coral, and shells. After they are named, if they are sediments they are then classified by size range and then adjectives are added to specifically describe the sample, such as: fine, medium, coarse, broken, sticky,
soft, stiff, volcanic, calcareous, hard, soft, light, dark, small, medium, and large. 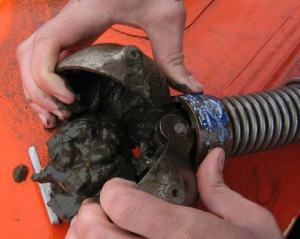 Here is one of the bottom samples that we collected.

After each sample was taken we used a laptop (that can get wet) with a GPS receiver attached to it to log our exact positions. This information will be part of the charts that will be made when the area is completely surveyed. 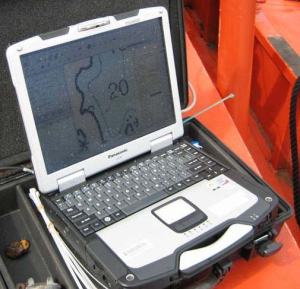 Tough notebook laptop,yes it can get wet.

As already stated one of the highlights of my trip so far has been the Dall’s porpoises that raced alongside us. That is something that I will never forget. This was not the only wildlife sighting of the day. When we were transiting from one sample area to another, I spotted a bald eagle and pointed it out to two of the other guys on my boat. What happened next was awesome.
Once we saw the eagle, which as I have told you are all over the place, we noticed another smaller bird in front of it. The eagle was chasing him and was hot on his tail. Suddenly the smaller bird had nowhere to go and did a nosedive into the water. This was so cool. Then the eagle proceeded to circle the smaller bird from above so as to say stay down there. I also saw numerous whale spouts from a distance, too far to tell what type. While back on the Fairweather for lunch a stellar sea lion was swimming right along the starboard side of the ship. When I went outside to see him, he surfaced, came out of the water about chest high looked right at me and swam away, never to be seen again.
SE Alaska is truly a special and magical place. Not just for wildlife, the scenery is absolutely spectacular. I can’t wait to see what another day brings with it.