Today we made our way about 50 nautical miles off shore to the North Florida Marine Protected Area (MPA) accompanied by dolphins and flying fish.  The North Florida MPAs were closed by the South Atlantic Fishery Management Council to bottom fishing in order to sustain and repopulate the following species of fish:  snowy grouper, yellowedge grouper, Warsaw grouper, speckled hind grouper, misty grouper as well as golden and blueline tilefish.  A second part of our science team is looking at the benthic invertebrates such as corals and sponges as they provide a habitat for the grouper and tilefish to live in.  The types of corals and sponges we expect to see in this area include: black coral, whip coral, purple gorgonian, Tanacetipathes, and the stink sponge.

We did three Remotely Operated Vehicle  (ROV) dives with the Phantom S II.  Each dive was between one and two hours long depending on the bottom conditions.  The winch from the Pisces would lower the ROV to the bottom of the ocean approximately 50-60 meters deep (164 to 196 feet).  The area in the MPA we were looking at had been mapped the night before using the ship’s Multibeam Sonar to give the scientists a better idea of where to look and what type of bottom features they will see.   The current at the bottom for a couple of the dives was about 1.5 knots.  This made it pretty difficult to spend quality time looking at the species.  The Scientists will take this data back to the lab where they can spend more time with each video to fully catalog each species we saw today.

Stephanie Farrington and myself are logging data.

Once the ROV’s cameras were rolling, the science team was able to begin logging all of the different species that they saw.  Each part of the transect line is carefully documented with a date and time stamp as well as a latitude, longitude and depth.  Also mounted on the ROV is a small CTD to collect the temperature and depth every 15 seconds.  This will help the scientists match up all of the details for each habitat that we saw with the video on the ROV.  While the ROV is at the bottom collecting data, there are several different stations going on in the lab at the time.

John Reed and Stephanie Farrington are looking mostly at the benthic invertebrates, Stacey Harter and Andy David are cataloging all of the fish they are able to see and identify, and Lance Horn and Glenn Taylor are manning the ROV.  There is also a fourth station where one of the scientists uses a microphone to annotate the video as it is being recorded onto a DVD.  Today John, Stacey and Andy all took turns at the video annotation station.  Basically they are verbally describing the bottom features and habitat they see as well as all the different species of fish and corals.  This will make it easier for the scientists when they get back into their home labs as they process their data.  For each one hour of video taken it will take Stacey between four and eight hours to catalog each fish found as the ROV passed by.  This information is compiled into a report that will be shared with the South Atlantic Council to show if the targeted species are actually making a comeback in these MPAs.

The snowy grouper is one of the targeted species. We found this one using the ROV swimming back into his burrow.

Tomorrow we will make several more dives at another site outside the North Florida MPA so we can compare this data with the data taken today inside the MPA.

As part of the abandon ship drill, we had to be able to don our immersion suit in less than three minutes.

Life on the ship is really different in some ways compared to life on land.  There is the constant rocking of the ship, which my inner ears are not very fond of. The bedrooms are not the biggest and we each share with one other person.  I am rooming with Stephanie Farrington and she is very easy to get along with.  The food has been great — it would be very easy to gain weight while working on the Pisces.  The stewards do a fantastic job preparing meals for everyone on the ship.  Meal times are the same each day, breakfast is from 7-8 am, lunch is from 11am to noon, and dinner is from 5-6pm.  If someone is working the night shift, they can request that a meal be set aside for them so they can eat later.

In this section, I will be interviewing scientists and crew members to give my students ideas for careers they may find interesting and might want to pursue someday.  Today I interviewed Stacey Harter, the Chief  Scientist for this mission.

What is your job title?  I am a Research Ecologist at NOAA Fisheries Panama City Lab.

What type of responsibilities do you have with this job?  My responsibilities are to acquire funding for my research, as well as plan the trips, go on the cruise to gather the data, and analyze the data when I get back.  I am also collaborating on other projects with NOAA Beaufort in North Carolina and St. Andrew Bay studying the juvenile snapper and grouper populations in the sea grass found at this location.

What types of experiences have you had with this job?  My best experience I’ve had was getting to go down in a manned submersible to a depth of 2,500 feet to study deep water corals and the fish that live there.

What is your best advice for a student wanting to become a marine biologist?  Do internships!  This is the best way to get your name out there and to make connections with people who might be able to get you a job after college.  I had an internship at the NOAA Panama City Lab while I was in graduate school which helped me to get my job with NOAA when I graduated.

Corals growing on the pier pilings

What a busy couple of days we have had here on the Knorr. We have been crisscrossing the shelf following a plankton bloom we can see from the MODIS satellite. MODIS, which stands for Moderate Resolution Imaging Spectroradiometer, is a key instrument aboard both the Terra  and Aqua satellites. Terra’s orbit around the Earth is timed so that it passes from north to south across the equator in the morning, while Aqua passes south to north over the equator in the afternoon. Terra MODIS and Aqua MODIS are viewing the entire Earth’s surface every 1 to 2 days, acquiring data in 36 spectral bands, or groups of wavelengths. A big area of interest in oceanography is ocean color. Because the world’s oceans are so vast it can be hard to monitor them on a large scale. Using satellites is ideal because they can profile large swaths of the ocean at any one time. Changes in the oceans color as seen from space can give scientists a good estimation of what’s going on in terms of productivity. The problem with using satellite information here on the Bering Sea is the fact that it cannot see through clouds. Well, guess what we get up here on the Bering Sea, clouds. It’s great when we get a clear or not so overcast day because then we can make good use of MODIS information. 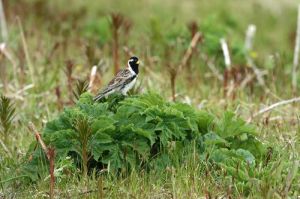 One of the U.S. Fish and Wildlife people onboard, Liz Lubunski took some great pictures of birds and wildlife and I thought I would share them with you. She is one of the two people (the other is Sophie Wells) who are doing a survey of birds here on the Bering Sea. Liz had to get of at St. Paul Island but Sophie is still onboard and is continuing the survey. Both have tremendous knowledge of the local birds life and great eyes, plus better cameras then I have to get those better shots. There is a great diversity of life up here in Alaska. The picture of the Metridium anemones growing on the piling was taken right at the pier where the Knorr was docked.  She was also able to get some pictures of the American Dipper (Cinclus mexicanus), which makes its living catching small invertebrates in fast moving streams and the Lapland Longspur (Calcarius lapponicus), which summers in extreme northern Canada and Alaska.

The one bird I get asked about the most is the Albatross. Well here are a couple of shots of some Laysan Albatross (Phoebastria immutabilis) we saw while on station. They tend to stay away from the ship but Liz was able to the pictures with a telephoto lens. These particular birds traveled here to the Bering Sea from the Hawaiian Archipelago.

They feed mostly on cephalopods such as squid. In recent years there has been a problem with these birds picking up pieces of plastic from the ocean, mistaking it for food and feeding the plastic to their chicks, which frequently causes them to starve to death.

Unfortunately there is way too much plastic in the ocean and this is really having a deleterious effect upon marine life. From sea birds to turtles, many organisms are adversely harmed by our improper disposal of plastics. Please keep that in mind next time you are shopping. Be aware of how much plastic and packaging we are buying because unfortunately some of this makes its way into our marine ecosystems. 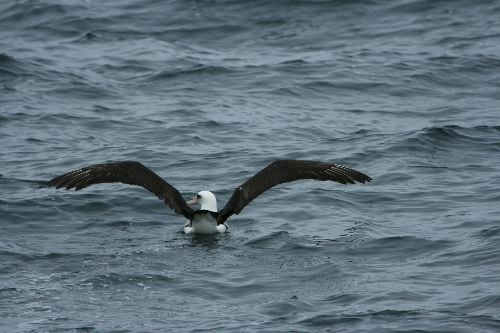 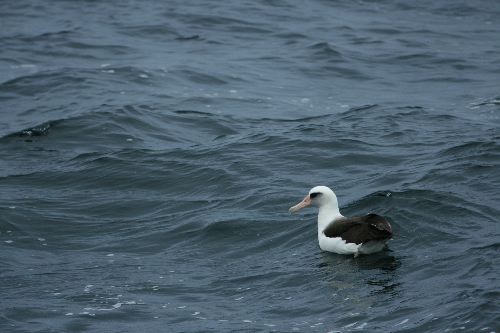