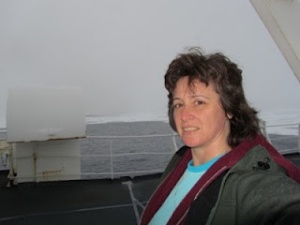 Farthest Northern point on a map 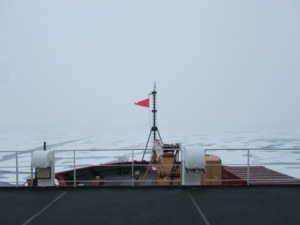 I took the picture at the beginning of this post myself, at about the same time as the map shows!

We ended up a little farther north in the early morning as we maneuvered to get back in line withLouis, who rejoined us after some downtime for repairs.

Our official FARTHEST NORTH point was at latitude 82º32’. The original plan called for 85ºN, but the ice is thick and progress is slow, and we have had several delays. Now we are eastward bound, on a line that heads towards but ends before the Queen Elizabeth Islands of Canada. Healyspends a lot of time backing and ramming. There are numerous ridges in the ice formed when ice floes drift with the wind and currents and collide with other flows, and these present big obstacles. First they drive the ship into the ridge, then back up, leaving the impression of the ship’s bow like a snow angel.

There is an eerie silence when the ship is backing, and I expected it to be followed by a burst of speed (hence the backing and “ramming”), but the ship just drives forward again over the same track. It can take two or three times to break through a large ridge. Even then, it can be difficult for Louis to proceed with her towed gear even – often the pressure causes ice to drift back into the track before Louis can pass through. On numerous occasions Healy has had to double back to relieve the pressure on Louis by coming around and passing to the side of the ship, trying to give the ice a different way to drift. Sections of Healy’s track line look as if we are doing figure eights around Louis.

Since Sunday, we have been at latitudes where the sun does not set. I get off watch at midnight local time, but true midnight is usually an hour or two after that. Here are some views of the sky that I see when I leave the computer lab at night. 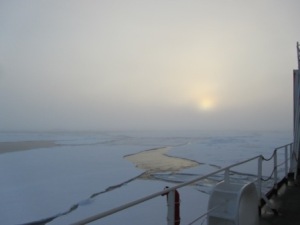 I can’t always see the sun, but it’s still pretty and peaceful, even when we are banging through ice.