As a former student of community development (go fighting okra!), I am always interested in the social science aspects of communities and towns. I enjoyed the opportunity to learn about Dutch Harbor/Unalaska and was very excited when I learned we needed to make a pit stop in St. Paul, the largest of the Pribilof Islands. I learned about the Pribilofs at the Museum of the Aleutians and was intrigued by the islands’ remote location, abundant wildlife and complex history. The islands were uninhabited until Russian fur traders forced Aleuts to relocate to the Pribilofs in the late 18th century to harvest fur seal. Many Aleuts endured centuries of servitude and continue to call the Pribilofs home. As reported on a sign at the edge of town, St. Paul is home to the largest Aleut community in the world. 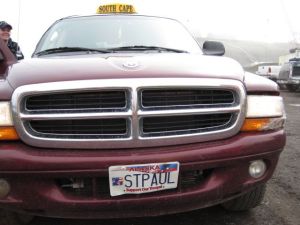 Overnight, the Oscar Dyson had stopped to pick up an ice-flow sensor from a buoy and needed to ship it back to Seattle for another project. As we were close to St. Paul, the decision was made to send a small crew into port to transport the sensor to the airport. After expressing my enthusiasm for the Pribilofs (the fur seals! the reindeer! The “Galápagos of the North!”) to our CO (Commanding Officer Mike Hoshlyk), he allowed Katie, Michele and I to accompany Amber Payne and Joel Kellogg on their mission into port.

Off in the Zodiac

For our mission, we got decked out in our protective weather gear (complete with float coats – basically, a winter coat with a PFD inside). After days of bopping around the boat in regular clothes, it was exciting to get “dressed up” and go out on “official business.” The water was glassy and still as we rode on the small Zodiac through the fog into the cove on St. Paul’s.

We met a taxi at the dock and headed to the airport. Driving through town was an amazing experience as the dark volcanic soil, the rolling green mossy hills and the dense fog created the sense of another world. We were probably a surprising sight as well when the we arrived at the airport — imagine four women in full boat gear (Joel stayed back to watch the boat) hauling a heavy, silver box through the small, fog engulfed building. 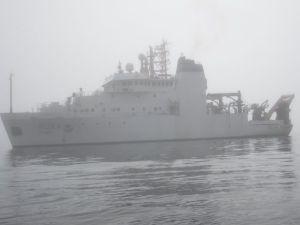 Once we had secured shipment for the sensor, we headed back into the fog on our way back to the ship. The fog produced limited visibility as we rode out of the cove, although we were able to spot some sea lions. There was a moment when we were surrounded by fog and I was relieved when the ship appeared in front of us. It looked like an eerie ghost ship on the calm water.

Almost everyone was on deck when we returned, as of course they were eagerly awaiting our arrival to get back on course and continue our journey. While I am unlikely to visit the Pribilofs again, I am glad that I was able to see such a unique place.

Animals Seen
Auklets
Murre (2 different types differentiated by bill type)
Puffins
Sea lions
(but no fur seals…not sure why as there should be several hundred thousand living amongst the islands but their numbers have been in decline. See here for more information)

Bonus picture: Katie, Michele and I in our full gear. Check out those rain pants!

Katie, Michelle and I in our full gear