The Revelle is now on station and will remain in this location for approximately 28 days to conduct measurements of surface fluxes, wind profiles, C-band radar, atmospheric soundings, aerosols, sonar- based ocean profiling and profiling of ocean structure including turbulence.  Please note that the exact position and course of the ship will not be posted in this blog until Leg 3 has been completed and the ship is back in port in Phuket, Thailand. Although piracy is not anticipated at the station location, it has been a problem in other parts of the Indian Ocean and the policy is not to publicize the coordinates of the ship.

The Surface Fluxes group measures the amount of radiation and heat into and out of the ocean. There are several dome instruments on the Revelle to measure atmospheric radiation, acoustic and propeller sensors to measure winds and a “sea snake” to measure the sea surface temperature. The term flux is defined as a transfer or exchange of heat. The sum of the terms in the equation below indicates how much radiation is in the ocean. If the sum >0, the ocean is warming.  If the sum is <0, the ocean is cooling. Below each term is a photograph of the ship-board instrument used to measure it. 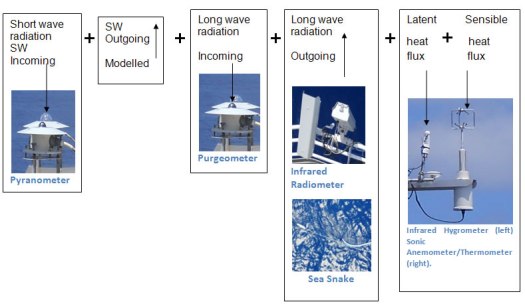 Today I deployed the Los Angeles Valley College drifting buoy. Before leaving Los Angeles, the students in my introductory Physical Geology and Oceanography classes signed NOAA stickers that I placed on the buoy before releasing it into the Indian Ocean.  A drifting buoy floats in the ocean water and is powered by batteries located in the dome. The drifting buoys last approximately 400 days unless they collide with land or the batteries fail. The buoy collects sea surface temperature and GPS data that are sent to a satellite and then to a land station where the data can be accessed. Drifting buoys are useful in tracking current direction and speed. Approximately 12 drifting buoys will be deployed from the Revelle during Leg 3 of the Project DYNAMO cruise.

Can you have pirates before a pirate drill?

After we arrived on station, a science meeting was held to provide instructions regarding safety and emergency procedures for mandatory drills such as fire safety, abandon ship, and pirate drills.  Drills are typically scheduled once a week and we have already assembled for a fire drill.  A pirate drill was scheduled for the following week.

I began my orientation working with the Oregon State University Ocean Mixing Group. My role on the research team is to assist with the operation of the “Chameleon”, a specially designed ocean profiling instrument that is continuously lowered and raised to the surface taking measurements while on station.  My job is to rotate between operating the winch (used to lower and raise the instrument) and the computer station. The computer station operator is in constant communication with the winch operator and tells the operator when to raise and lower Chameleon.  In addition, the computer operator logs the critical start and end times of each run and keeps track of the depth of the instrument.

I was just beginning to learn to operate the winch when an alarm sounded followed by the words “Go to your pirate stations, this is not a drill, repeat, this is not a drill”.  I must admit I was a bit stressed.  When I came on this trip, I knew there was a remote risk, but I thought it was extremely remote.  Everyone assembled in the designated area and it turns out that a fishing boat was approaching the ship and the Revelle does not take chances if the boat appears to be approaching boarding distance to the ship.  There have been two instances where we have assembled for safety following the alarm and the words “This is not a drill, repeat, this is not a drill.”  In both cases, fishing boats were too close for comfort.  As I began operating the winch, I watched a fishing boat off in the distance for a few days and became more comfortable knowing that the ship is taking extreme caution to protect all on board. All this excitement and before we even had a pirate drill!

But all is well somewhere out here on the equator and the Indian Ocean provides many opportunities for photographing amazing sunrises and sunsets.