So how exactly do marine biologists conduct fish surveys under water? If you are a student in my class, you know that science cannot be conducted all random and willy-nilly. There has to be a standardized procedure in which different variables are controlled in order to ensure the data you collect is meaningful. Some of the variables that are controlled during scientific dives are location, depth, and time. 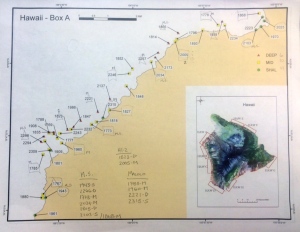 This map shows the survey sites around the island of Hawaii. – photo courtesy of NOAA Fisheries

Location: In order to ensure that scientists get an accurate overview of the health of an island’s reefs, sites from around the entire perimeter of the island are chosen. It would not tell scientists very much if they decided to survey, say, only the eastern side of an island, or only two different sites on the island. As an example, here is a map of the areas that will be visited around the island of Hawaii. On this map, daily survey areas around the island are indicated by red rectangles, as seen on the inset map. The larger map shows each individual dive site in one of those areas. Which area is shown on the large map? Each site is given an identifying number and a code for depth.

Depth: Again, scientists would not get a very accurate picture of the health of the coral reefs if they only conducted dives at the same depth. A variety of diving depths are chosen, and these depths are recorded as shallow, moderate, or deep:

Can you tell me how shallow, moderate, and deep are coded on the map above?

Time: After divers descend to their survey sites, they take a benthic photograph so they can later confirm what type of reef habitat it is. Then they count the fish they see in their location for a certain amount of time. It would not be a “fair” count if one diver counted fish for 10 minutes, while another one counted fish for 20 minutes. For this particular research cruise, pairs of divers (you never dive alone) go under water, stand in one spot, and count the fish they see in a 15 meters diameter cylinder for 30 minutes. The Random Sea Survey graphic here shows how these surveys are conducted. This type of survey is called a Stationary Point Count Survey.

I was on the boat called Metal Shark. Woops!

Every day, each boat completes a Dive and Navigation Information Form. On this form, the boat crew notes the date and number for each site visited. GPS is used to record the latitude and longitude of the site. Ryan, one of the coxswains, taught me how to use the GPS to identify and record latitude and longitude for dive sites. In addition, after the dive is complete, divers complete some information about the site, such as what kind of benthic (floor) cover it has. Here is a picture of a properly completed form, not to be confused with my team’s form, which was a FAIL today (But it was the divers’ section that was not complete, not mine!). Kevin Lino, the scientist being interviewed in today’s blog, completed this excellent example. He is in charge of this whole operation, so his form should be perfect, shouldn’t it?

Interview with a Scientist

Kevin Lino is a Marine Ecosystems Research Coordinator for NOAA’s CRED (Coral Research Ecosystem Division), and the Project Leader for this cruise, the Main Hawaiian Islands Reef Fish Survey. He is the man running the show here, and I can vouch that he is very capable and very good at his job. 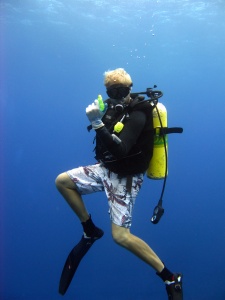 What do you love most about your job? Fish! I’m a fish nerd, and have been since I was a kid. I was obsessed with sharks as a kid, and loved what Shark Week used to be: real information, not dramatized. Tiko and the Shark was a movie I loved as a kid. I grew up fishing and spending time on boats. Growing up, I had a goal to dive with every species of shark on Earth. I have so far dived with 38. Most of the rest are deep-water sharks, and I would need a submarine to see them.

What kind of education do you need to have this job? I studied biology as an undergrad. I took summer classes in ocean environments and elective courses in marine biology. In college, I also took diving courses.

Do you have any advice for young people interested in your line of work? Study science and math, get in the water, volunteer and help out at places like the Marine Mammal Center, beach/ocean clean ups, and meet other biologists.

Today during small boat operations, our coxswain, Rich (possibly the nicest person I have ever met), let me drive the boat HI-2. There is a lot to maneuvering a boat through swells and protectively around divers. Rich makes it look easy, but it isn’t! I am hoping that before I leave, they will let me try talking on the radio and hook or unhook one of the small boats as they are launched.

The Hawaiian Morwong, that adorable little fish, has very strong pectoral fins that they use to prop themselves up on the bottom of the sea floor. They eat by pressing their thick, fleshy lips to the bottom, sucking in sand and detritus, and then filtering out small invertebrates. 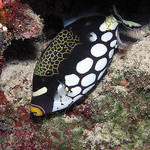 The clown triggerfish has some stunning markings -photo courtesy of NOAA