Weather Data from the Bridge (get data from bridge)

The Oregon II has two sets of crew – the ship’s crew headed by Captain Dave Nelson and the science crew headed by Lisa Jones. Captain Dave and Lisa work closely together making decisions that impact the survey. The ship’s crew keeps us afloat, fed and ultimately determines where we go based on weather. The science crew, well you guessed it, is focused on the science and collected data at predetermined sampling sites.

This post will look at some of the science happening on board. On board are four NOAA scientists as well as other volunteers and researchers that are helping with this survey. NOAA’s focus on this survey is all about sharks and snapper. We are collecting data on what we haul up from the longlines as well as abiotic factors including temperature, depth of line, dissolved oxygen, and salinity of the water. The data is entered into a computer and becomes part of a larger data set. 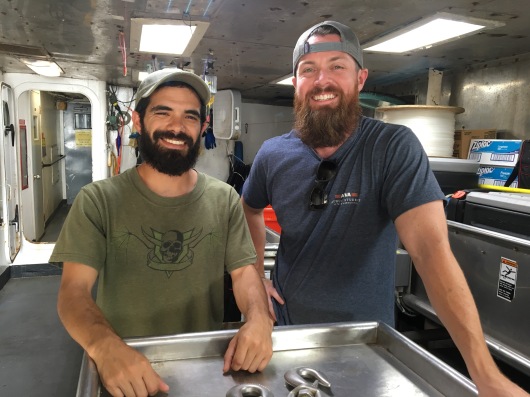 Two researchers on board working as volunteers are Brett Warren and Carlos Ruiz. They are parasitologists meaning they study parasites that sharks and other organisms carry. A parasite is an organism that lives off other organisms (a host) in order to survive. They are finding all sorts of worms and copepods embedded in the nose, gills and hearts of fish and sharks. These two spend much of their time using microscopes to look at tissue samples collected. 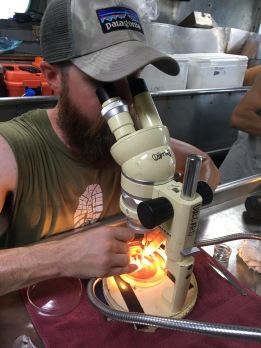 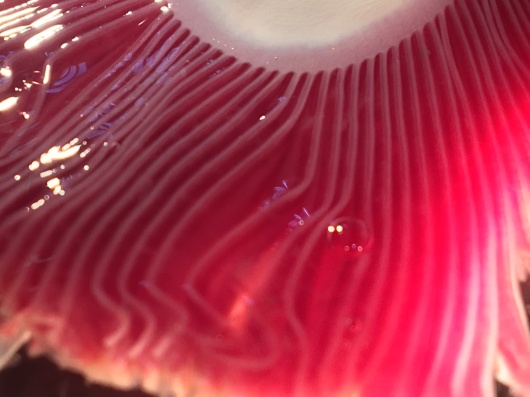 Can you guess what this is? Answer in the comments and first right answer gets a prize!

Their main focus on this survey is to discover new species of parasites and understand the host- parasite relationship.

The past few days have been slow with only a few stations a shift. We have hauled up some sharks, eels and even a sharksucker fish. One station had nothing on the 100 hooks set! Talk about getting skunked. As we move west I am hoping we get to see more sharks as well as more variety. Other wildlife spotted include dolphins, jellyfish and birds. 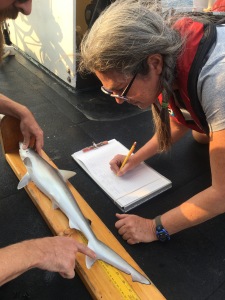 Finding the length of a sharpnose shark 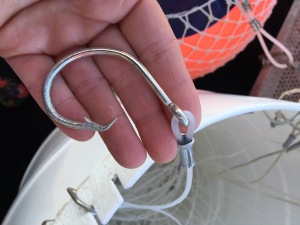 size of hooks we are using

Just because it’s a parasite doesn’t mean it harms the host. Some just live off of another organism without harming it.

Question of the day:

What are the two types of life cycles a parasite can have? (hint: read the blog)