Science and Technology Log On a NOAA ship, similar to a military vessel, everyone has specific titles.  It would be like calling your principal or mom a CEO (Chief Executive Officer) followed by their last name.  Comparably on a ship there are tons of acronyms like (f.y.i., a.k.a, or my favorite o.m.g.). However, the acronyms the shipmates use are for titles and instead of fun text phrases they are based on status and certification. Ship acronym/name examples: CO: Commanding Officer XO: Executive Officer FOO: Field Operations Officer Ensign: “Fresh Meat” or Junior Officer Boatswain (Bosun): a Wage Mariner in charge of equipment and the crew GVA: General Vessel Assistant Today was full of events.  I awoke at around 6:02am and went outside to breathe in the fresh air and watch the day break.   After eating yet another delicious breakfast in the mess hall (cafeteria…we aren’t that messy) I was told by the FOO Davidson I would be going out on my first launch.  I was placed on the 3102 which unfortunately does not currently have any hydrographic equipment  (we hope to obtain a scanner this weekend sent from a Pacific Ocean NOAA ship). Today our mission is to go to the shores of Montauk, Long Island and retrieve data from a tidal instrument that was logging the daily tidal changes.  Normally these instruments can be accessed via satellites, however the most recent Nor’ Easter compromised the instruments and made its information inaccessible via the internet.  BGL Rob (Boatswain Group Leader) normally would be taking the helm (steering wheel of boat) and Frank (surveyor) and Ensign  Storm’n Norman also came along.  Ensign Norman is currently learning how to navigate a small ship for a new license so took the helm while BGL Rob supervised (she needs to log so many hours behind the helm before sitting for the exam).  All four of us piled into the 3102 while a massive davit (hydraulic lift) placed the 3102 from the TJ into the Atlantic Ocean. The technology behind the davit blew me out of the water (not really), but it was pretty amazing.  The ship was moving 5.8 mph (you walk about 1.5-2mph) while 3102 was being lifted out of the water.

Boatswain Rob gave great tips to Ensign Norman; however, Ensign Norman was confident and very much in control of 3102 and did a fantastic job driving us to and from Montauk.  Once we arrived at Montauk, Frank opened the weather station and a huge amount of water poured out (probably why it wasn’t transmitting data).  It took quite a while to get the information downloaded on the computer we brought, because the system was out of date with current technology (so interesting how fast technology moves). While Frank was on the phone with an engineer stationed in Seattle I walked along the dock and met a lovely gentleman named Joe and his dog, Lil’ Sugar.  Joe was also a captain of a ship and ferried people to and from Block Island.  Joe was a very warm gentle soul who spoke of his years at sea and all of the unique experiences he has been fortunate to have on multiple vessels.  Currently Joe works as a Captain for a whale watching company (apparently Right Whales are migrating).   After my lovely chat with Joe and quick walk around I returned to the group. 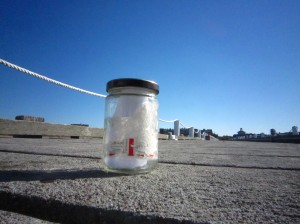 Message in a bottle found on Montauk Beach.

Upon returning Frank had found a note in a bottle that a woman named “Karen” had thrown into the ocean and washed ashore in Montauk.  We presumed Karen was from somewhere in Connecticut (based on the cell phone number).  We called her number, but she did not retrieve her phone.   I will say for all of you wistful bottle throwers.  If you do this, make sure you use glass (it doesn’t break down to little plastic bits that fish mistakenly eat for food) and be imaginative with your note (I am not advocating for anyone to throw a bottle into the ocean).  Karen’s was very plain and gave little background or visual.  It was more fun talking with the group and imagining all of the personality and character she may have had (most of this was based on the jar she placed the note in…it was a Trappist Preserves jelly jar).  Trappist Preserves usually retails for $27.00 and is hand-made by monks in an Abbey located in Massachusetts.

Kimberly the Great in front of Acquisition Screen locate off of the Bridge.

When I returned to the TJ I spent the rest of the day (almost 6 hours) in the acquisition room, located on the bridge, with Kimberly the Great.  Kimberly is a seasoned surveyor (meaning she has been aboard the TJ for seven years) and was able to break down each surveying screen in an incredible way.  (Read Nov. 3-4 for a break down of Hydrographic surveying)